Australia will launch an ambitious global plan to eliminate tariffs on wind turbines, solar panels and other green industries in a bid to fight back against the European Union’s (EU) push to impose carbon levies on countries with weak emissions laws.

Millions of dollars in new tariffs could be slapped on Australian exports after the European Parliament this week voted to forge ahead with carbon tariffs on products from countries without a carbon price. 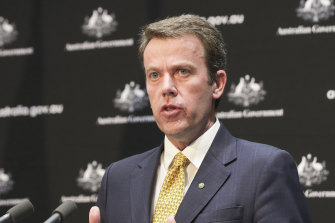 Federal Trade Minister Dan Tehan confirmed he would push back against the EU’s move, revealing Australia would argue through the World Trade Organisation (WTO) for an alternative plan to slash tariffs on more than 50 environmental goods and services. They include wind turbines, solar panels and wastewater treatment technologies.

“We want a trade liberalisation approach, not a protectionist approach, in terms of how we deal with emissions reduction,” Mr Tehan told The Sydney Morning Herald and The Age.

“If the EU uses a carbon border adjustment mechanism, it not only raises serious concerns about WTO compliance, but also the negative impact it could have on trade between nations which as we know creates jobs and in particular helps developing countries grow jobs and their economies.”

In 2012, members of the Asia-Pacific Economic Cooperation Forum agreed to cut tariffs on 54 environmentally friendly products to 5 per cent. Australia will now argue at the WTO that the tariffs on these products should be slashed to nothing, while environmental services — such as climate change mitigation, wastewater management and refuse disposal — should also be added to the list.

The EU has argued for carbon tariffs on the basis they provide a “level playing field” between the domestic production of goods that are subject to a carbon price and the production of products that are coming into Europe from countries with less ambitious climate policies.

While presenting its alternative plan, Mr Tehan said Australia would make the argument there cannot be a “level playing field” unless the EU removes its wide-scale agricultural subsidies and exemptions under its emissions trading scheme. He said Australia would also point out that “we are on track to meet our commitments” under the Paris Climate Agreement.

Australia will use the WTO and the Cairns Group of 20 agricultural exporting countries to make its pitch for the “trade liberalisation” approach to bringing down emissions.

Senior Australian officials have been waiting for the Morrison government to develop an alternative to the plans by the EU and Britain to impose carbon tariffs. The issue could come to a head at a number of key global forums this year including Mr Biden’s climate talks in April, the G7 summit in Britain and the COP26 climate summit in Glasgow.

The EU, frustrated by global inaction on emissions reduction, has advocated for carbon levies to be applied on imported goods – such as aluminium, steel and chemicals – that are produced in countries with weaker climate laws. It has already committed to a carbon border tax by 2023, which is likely to hit products made with Australian raw materials.

The move by the European Parliament to adopt a resolution in favour of carbon tariffs – which could slog Australian importers with a levy of up to $77 per tonne – comes as Australia and the EU are in the advanced stages of negotiating a free trade agreement. 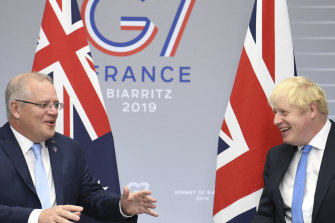 Prime Minister Scott Morrison has been invited by his British counterpart Boris Johnson to attend this year’s G7 where carbon tariffs may be discussed.Credit:PA

Its climate push follows Japan, China and South Korea – some of Australia’s main trading partners – pledging in 2020 to hit net-zero emissions by mid-century.

The National Farmers Federation, which chairs the Cairns Group Farm Leaders, is aiming for a 50 per cent reduction in non-tariff barriers impacting Australian farm exports by 2030.

NFF president Fiona Simson said it was “a little bit rich” of the EU to be talking about a level playing field with its own high tariffs, small quotas and billions of dollars in trade-distorting subsidies.

“This is an economy with some highly protectionist measures in agriculture,” she said.

“There’s lots of doubt about the mechanism they are attempting to impose and in any objective look they practice many trade-distorting activities or policies.”

The agriculture sector, which accounts for about 14 per cent of Australia’s annual greenhouse gas emissions has made significant progress over the past three decades, with pollution levels falling by 69 per cent from around 300 million tonnes per year in 1990 to around 92 million tonnes.

Ms Simson said Australian agriculture was the “envy of the world” in its climate ambitions and achievement in reducing emissions. The NFF has set a target of net zero emissions by 2050 while the red meat industry, which has reduced its emissions by around 60 per cent since 2005, is aiming for net zero in a decade.

She said addressing trade-distorting practices and cutting tariffs was the only way to achieve a level playing field.

“Australia exports about 75 per cent of its agricultural produce and our farmers are amongst the least subsidised in the world,” Ms Simson said.

“We want everyone to be able to compete on the same field and that does not come with more protectionist measures.”

“[The international move] tells us as a country we have to have a very ambitious and well-planned decarbonisation of our economy, because the tax will be on goods,” she said.