The Victorian Liberal Party’s success in seeing off strong independent challenges in its heartland seats of Hawthorn, Kew, Caulfield, Brighton, Sandringham and Mornington, in an otherwise disastrous election,came from an unlikely source — the teal independents themselves.

Retaining the seats, some by a slim margin, is a rare bright spot for new opposition leader John Pesutto as he prepares for the next four years. 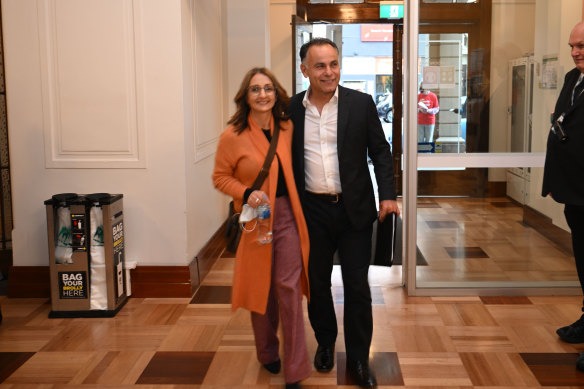 “What the Teals did was, in many ways, to remind the major parties that you have to go back to basics,” Pesutto told The Sunday Age.

“After the federal election I brought forward door-knocking and which I did alongside phone canvassing every single day for three months.”

Several Liberal sources confirmed that in those early months after it lost office federally, the Victorian Liberals’ own polling indicated the party was on track to lose more than half its state seats, with the greatest risk in seats under threat from independents such as Hawthorn, Kew, Brighton, Caulfield and Sandringham.

The Liberal campaign was criticised as amateurish when compared to the more-professional campaign machine that helped Labor stay in office.

In the neighbouring electorates of Caulfield and Brighton — which sit within the federal seat of Goldstein won by independent Zoe Daniel — Liberal sources told The Sunday Age that MPs David Southwick and James Newbury requested to distance themselves from the Liberal Party’s centralised campaign. 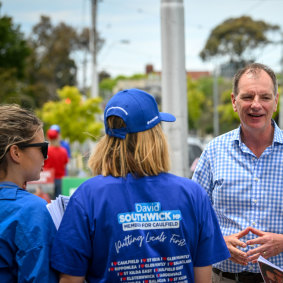 Liberal MP David Southwick managed to retain the seat of Caulfield at the state election despite a strong campaign from teal candidatesCredit:Eddie Jim

Instead, the two MPs pooled ideas and designed a bespoke strategy to tackle the teal threat.

“We needed to make it clear what we stood for, not against,” Brighton MP James Newbury told The Sunday Age. “We needed to run a localised, personal campaign and ask people to vote for me, not against Labor.

“Essentially, we unplugged from the central campaign, it was all about community”.

As part of the strategy to hold Caulfield and Brighton, the Liberal Party’s campaign machine was asked not to put out press releases or campaign material that explicitly referred to their electorates, according to several sources familiar with the campaign. An internal seats group set up to work on strategy was directed not to intervene in issues in these seats.

“I was conscious that I was being given the leeway I needed to run my own campaign,” Pesutto said.

“I think we need to skill-up our people and allow more customisation and tailoring into our campaigns. Voters aren’t as tribal as they once were, we can’t rely on the broader brand and think it will appeal in every seat.”

"It was about working really hard, sometimes that was 20-hour days, seven days a week." he said.

“But connecting people at a face-to-face level is better than a big sign with your face on it. I think that’s where people have gone against the major parties, they don’t see them as being real and genuine members of the community.″⁣

In a notable shift from the federal election, several Liberal MPs who fended off teal threats at the state election told The Sunday Age that they deliberately tried not to amplify their opponents’ campaign or engage in much of the argy-bargy which dominated the federal election.

This was a distinct difference from the federal campaign where the battle between Climate-200 backed independents and prominent Liberals became a sideshow of the election. As polling day closed in, Climate 200 founder Simon Holmes à Court was filmed in a confrontation with Liberal senator Jane Hume in Kooyong as a fight over corflutes in the seat of Goldstein ended up in the Supreme Court.

The state Liberals actively tried to avoid interactions during the federal campaign such as when Climate 200 founder Simon Holmes à Court was filmed in a confrontation with Liberal senator Jane Hume in Kooyong as a fight over corflutes in the seat of Goldstein ended up in the Supreme Court.

Newbury rarely mentioned the name of his independent opponent — Felicity Frederico — who received a personal donation from Holmes à Court but was not officially backed by Climate 200.

Pesutto said it was a strategy his team wrestled with. “It was a debate we had internally; how do we frame the choice? If anything we tried to make it about the Andrews government and not about the teals,” Pesutto said. 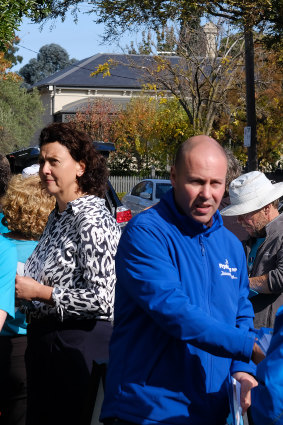 Pesutto said the party will need to undergo structural changes, if it hopes to hold these seats in four years time.

In an early sign of broader reform, on Sunday the party is expected to step away from previous unpopular tough-on-crime policies.

Leadership contender Brad Battin will be given the new criminal justice reform portfolio and tasked with coming up with alternative policies to address youth mental health and keeping youth out of correctional facilities.

The Liberals may have hung on, but it doesn’t mean the threat is over for the Liberal Party with Climate-200 backed independents gearing up to contest the NSW state election next year.

Unlike the federal election, the Victorian Liberals were also aided by donation laws which limit donations from individuals or organisations to $4210 over four years, making it harder for independents. The campaign also lacked the central policy debates like climate and integrity that dominated the federal poll.

While no Climate-200 candidates picked up a seat, Holmes a Court believes the Victorian campaign was a success.

“The idea that Kew, Hawthorn and Mornington would be neck and neck between an independent and the Liberal Party was unthinkable in 2018," he said after polling day.