If laughter is the best medicine, Daniel Andrews will be taking the stairs three at a time within days.

When the Victorian state Liberals can’t muster enough votes in their mini-party to achieve a spill, let alone put poor Michael O’Brien out of the misery of purportedly leading his colleagues, Andrews – who knows how to take a proper spill – must be howling with mirth and the exquisite pain of holding his heaving ribs. 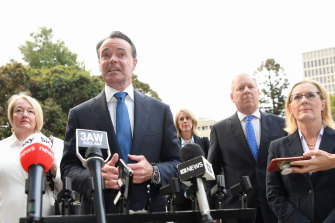 Michael O’Brien with his leadership team on Tuesday morningCredit:Justin McManus

Battin and his brains trust actually believed they had the support of Matthew Guy and his own band of malcontents, which goes to show that Battin and his people lack the necessary ingredient to be called a brains trust.

“Hypocrites of the century,” cried Battin’s forsaken camp followers when they realised Guy wasn’t tripping merrily at their side.

Were they so naive they had never heard of the Ides of March?

Guy, of course, was replaced more than two years ago as leader by Michael O’Brien and has pretty clearly never got over it, even if being supplanted by O’Brien suggests his own political smarts are not all that he’d crack them up to be. 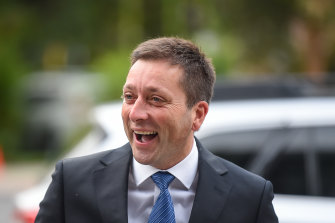 Having spent the previous four years belly-aching about everything when he came within cooee of a microphone, he’d endeared himself to the Victorian voting public to such an extent that at the 2018 election, Guy’s Liberals lost nine seats, reducing their position to a risible 21 seats in the 88-seat Legislative Assembly.

Ambition, of course, is a lust never quenched and it is no secret Guy wants another crack at the leadership.

We can only assume he believes his party shares his gluttony for punishment.

Whatever else he might believe, Guy could not be so dim as to imagine his ambitions would be served by going to the barricades on behalf of – what’s his name again? – Brad Battin.

And so, Battin and his people have been jilted, Guy has kept his powder dry and O’Brien is back where he started, which in these dire times is no place a political leader would really want to be.

As ever, it took Jeff Kennett to find the ideal, if slightly naughty word for this latest bout of Victorian Liberal silliness.

Which, of course, promises much yet to come, some of it better left to the imagination.

Our Morning Edition newsletter is a curated guide to the most important and interesting stories, analysis and insights. Sign up here.