Lily Allen has reached a milestone in her battle with addiction.

The “Smile” singer, 35, shared that she has been sober for a year and a half.

“18 months clean and sober today,” she wrote in a post to Instagram on Wednesday, adding, “Would recommend!”

She also shared a photo of a keychain reading, “Clean & Serene for Eighteen Months.”

In June 2020, Allen celebrated a full year of sobriety by posting a photo of herself on the beach and writing, “So grateful for my health and happiness.”

The London-based artist has struggled with addiction from a young age — using alcohol in high school and turning to drugs like Adderall years later. 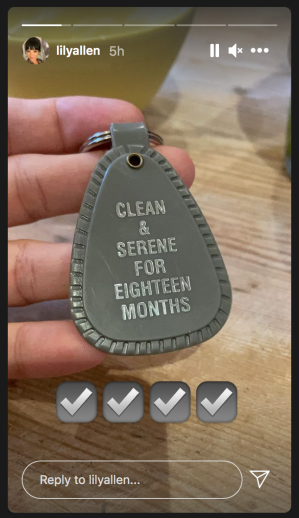 But the eye-opening moment for Allen was when she considered taking heroin.

“I remember being in LA and thinking like, ‘None of this acting out is working anymore. Maybe I should try heroin,’” she told the “Recovery” podcast in January 2021 (via People.) “… That was about five years ago. And I started recovery.”

She “got clean” but six months later she fell off the wagon again and “lost everything.”

“I lost my marriage. I lost my house I worked for 10 years to buy. My career started sinking. I lost all my friends. I was so resentful. So angry all the time. Really felt like the world owed me stuff,” she said on the podcast. “That went on for another four years.”

But she sobered up again and has been going strong ever since.

“I’m in the process of breaking that cycle. I felt so guilty about neglecting my kids in those early years of their life and having to go off on tour and misbehave in the way that I was. I really have a great relationship with my kids now,” she said.

“I’m in a really happy and healthy relationship. He’s sober, has been sober for 20 years now,” she said of Harbour. “We’re thinking about what we’re going to do with the rest of our lives … I don’t have as much as I had then in terms of success and wealth, but I have success and health in my mind, which is more valuable, I think.”