Long-serving Labor MP Chris Hayes will quit politics at the next federal election.

Mr Hayes, the chief opposition whip, has confirmed to this masthead he will not recontest his western Sydney seat after more than 16 years in Federal Parliament. 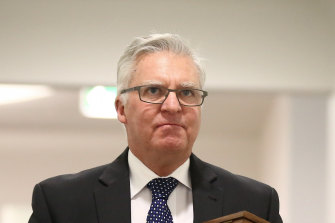 Last year Mr Hayes collapsed in Parliament and was admitted to hospital. In 2017 he spent 15 days in Canberra Hospital after suffering several broken ribs, a broken arm and internal injuries following a motorcycle crash.

Mr Hayes, whose seat is held with a margin of more than 17 per cent, is the brother of influential Health Services Union NSW secretary Gerard Hayes. His safe seat is likely to be hotly contested with senior NSW factional figures already discussing a replacement.

He has been in Parliament since 2005 after replacing Mark Latham in the western Sydney seat of Werriwa.