Would YOU buy your home based on a TikTok video? High-end developer sells £770,000 luxury London apartments to Gen-Z and millennial buyers after influencer campaigns on social media

A high-end London property developer has turned to TikTok to flog their lavish apartment to wealthy Gen Z and millennial users.

Avanton has successfully sold 85 per cent of their flagship scheme Coda in Battersea, south London, since building was completed last Autumn. The development has generated over £30 million of deals in 2021 and a local sales record was broken after a three-bedroom apartment achieved £1,450 per square foot.

David Ronson, Sales and Marketing Director at Avanton told FEMAIL that their success followed TikTok campaigns and partnerships with Love Island contestants like Eyal Booker, creating a ‘real buzz’ amongst buyers and agents.

He said Avanton is the first developer to start actively creating TikTok video content, and that their videos have helped to drive traffic of interested buyers to view their apartments, selling a ‘lifestyle’ as well as the property alone. 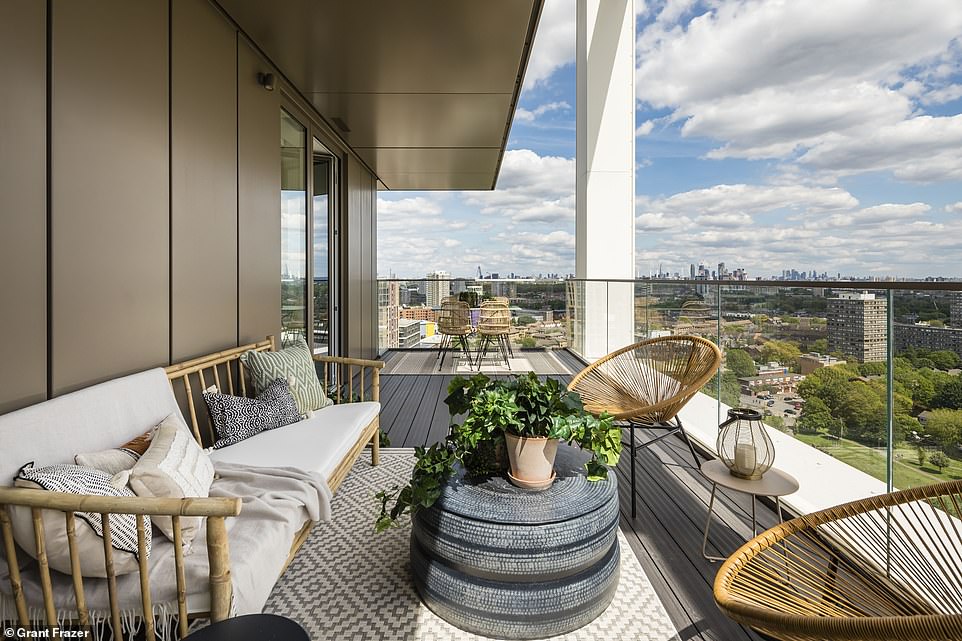 Avanton has successfully sold 85 per cent of their flagship scheme Coda in Battersea, south London, since building was completed last Autumn. Pictured, the balcony of their Terrace Collection showroom apartment 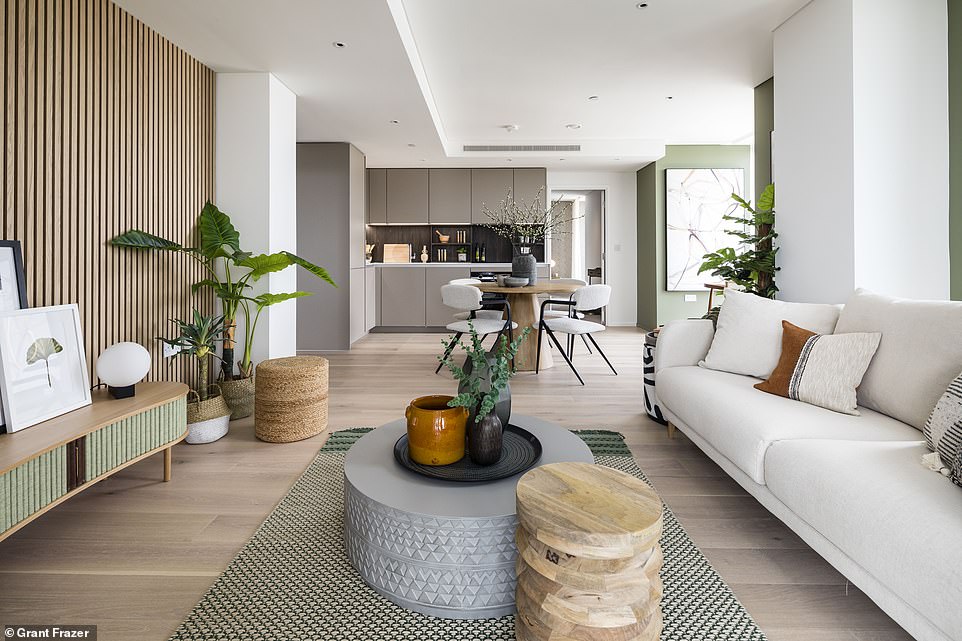 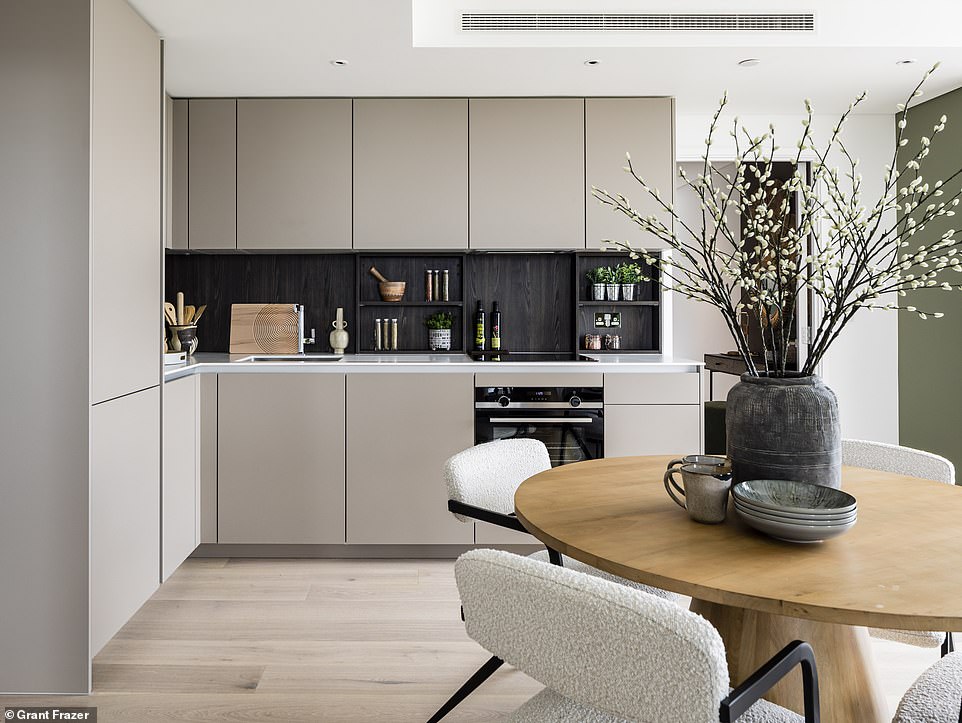 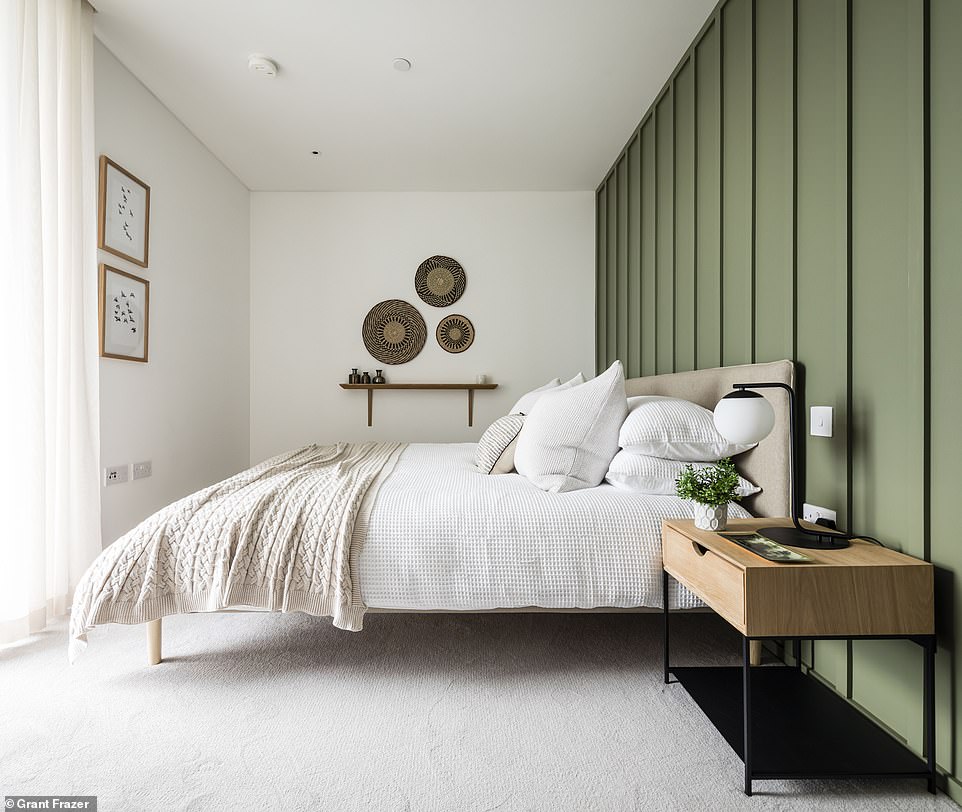 The on-trend panelling is continued in the main bedroom, where doors lead onto the private balcony, and principle bedrooms feature sleek Poliform wardrobes

Located on a two acre island site in Battersea, the initial £120 million development has just 45 homes remaining available to buy of the total 299, and following buyer demand Coda will launch their next project – the Terrace Collection – later this year.

Ronson said: ‘Because we were the first developer to start actively creating TikTok video content and promoting our homes on the social platform, it definitely created a real buzz amongst buyers and agents.

‘It helped place Coda at the forefront of people’s minds, in turn helping to drive traffic of interested buyers to view our apartments and learn about the lifestyle on offer.

‘As a new marketing technique, TikTok videos are certainly a way to communicate with a different target audience and showcase our product in a fun, engaging format. 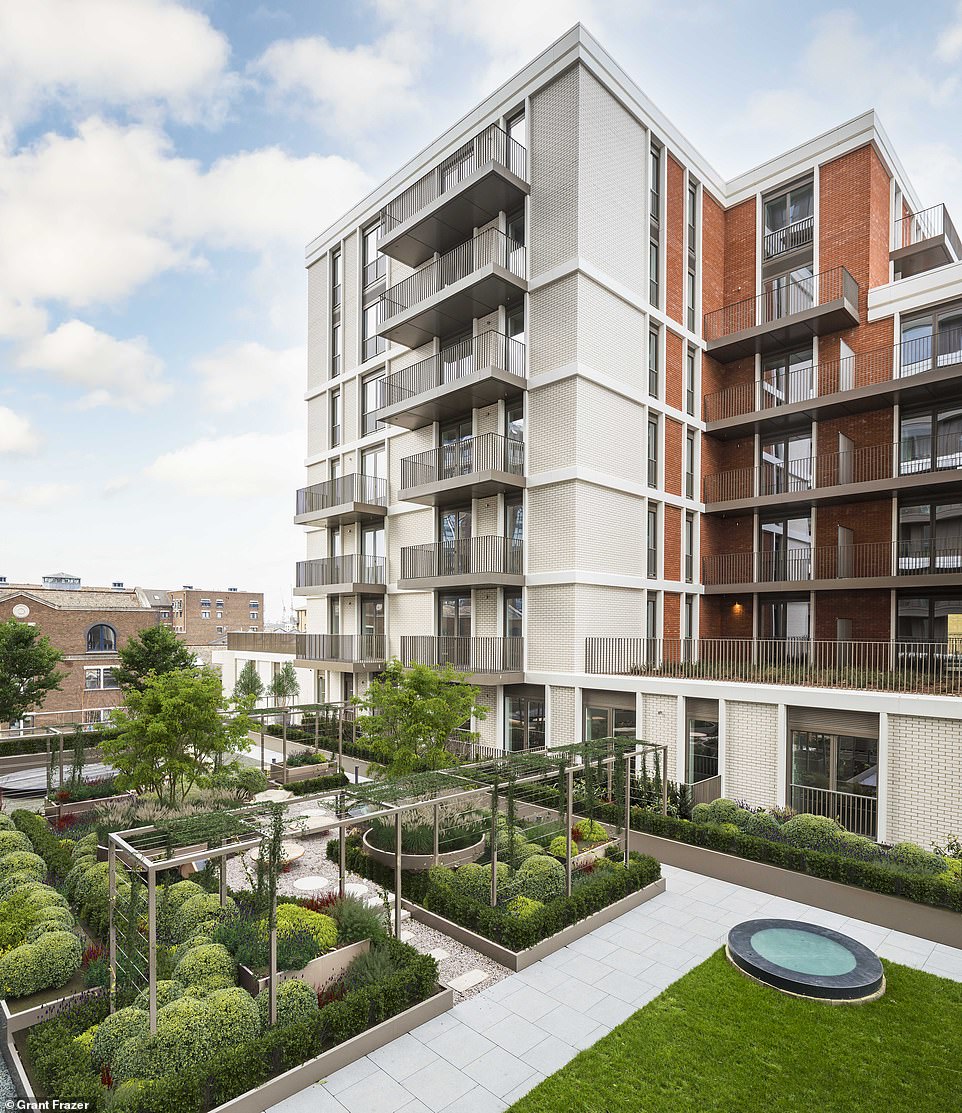 Located on a two acre island site on York Place in Battersea, the initial £120 million development (pictured) has just 45 homes remaining available to buy of the total 299 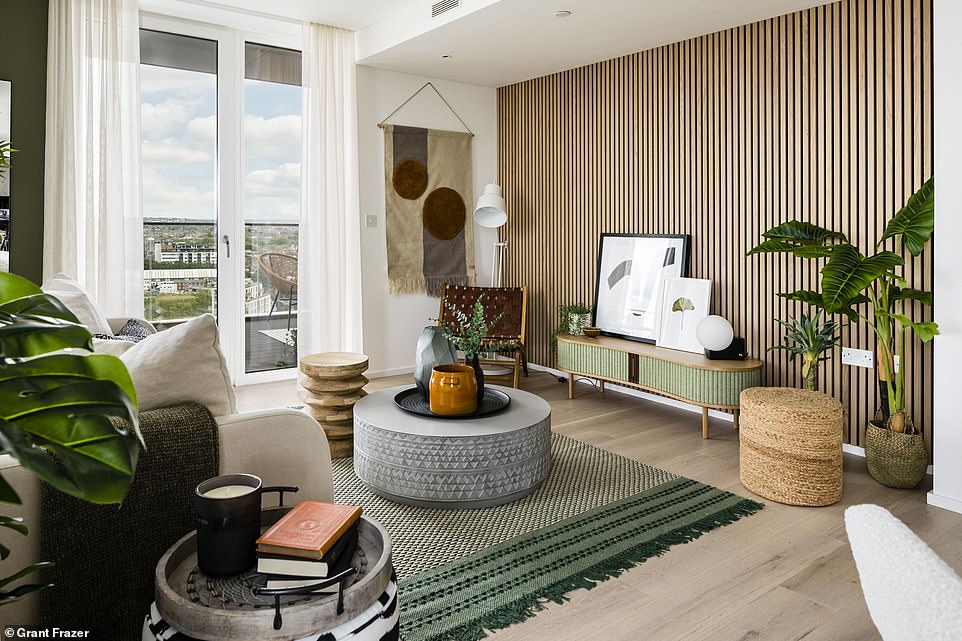 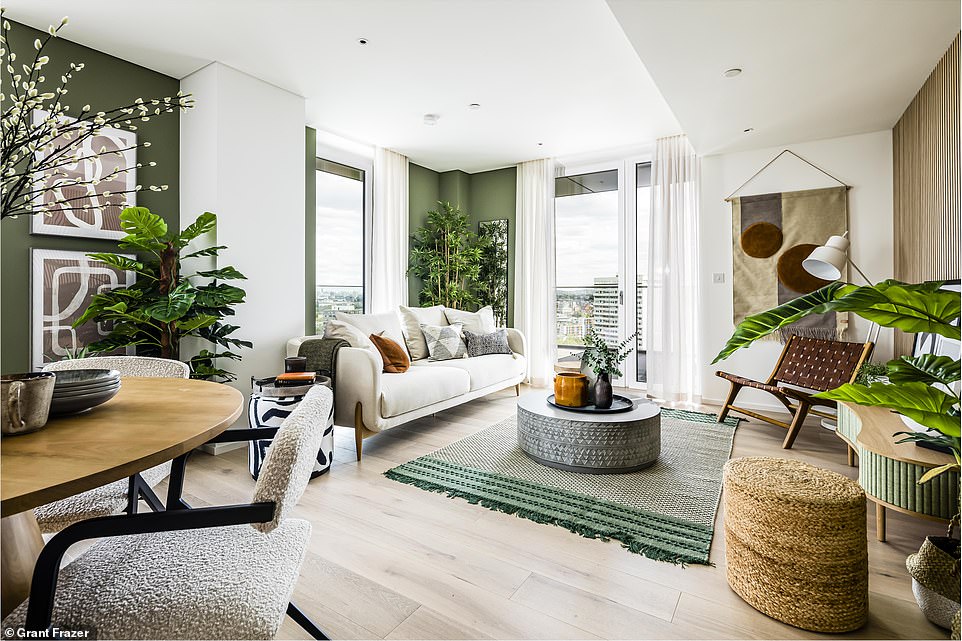 The bright main living room, which features contemporary wooden floors and statement green walls, enters out onto the main balcony

‘However, this technique remains a long-term branding exercise to build our brand awareness with younger generations, who over the next decade will become our key buyer demographic for our extensive new homes plans along Old Kent Road and across London.’

Former Love Islander Eyal was appointed as the development’s in house ‘fitness curator’ and created a platform offering coaching, nutrition and workout support to Coda residents, while Avanton also launched a 3D virtual model which acted like ‘online shopping’ for the apartments.

Ronson explained: ‘This is all helping to promote Coda as the most sought-after new development for young Londoners.

‘Today’s buyers are switched on and want the apartment buying process to be as streamlined and accessible as possible from their mobile phones – posting on TikTok is a fun way to catch attention and showcase the high-quality, sleek lifestyle on offer at Coda.’

Each Coda residence has a private balcony or terrace, with high-quality finishes including a designer Poggepohl kitchen with integrated Siemens appliances, Poliform wardrobes to the main bedrooms and spa-inspired bathrooms. 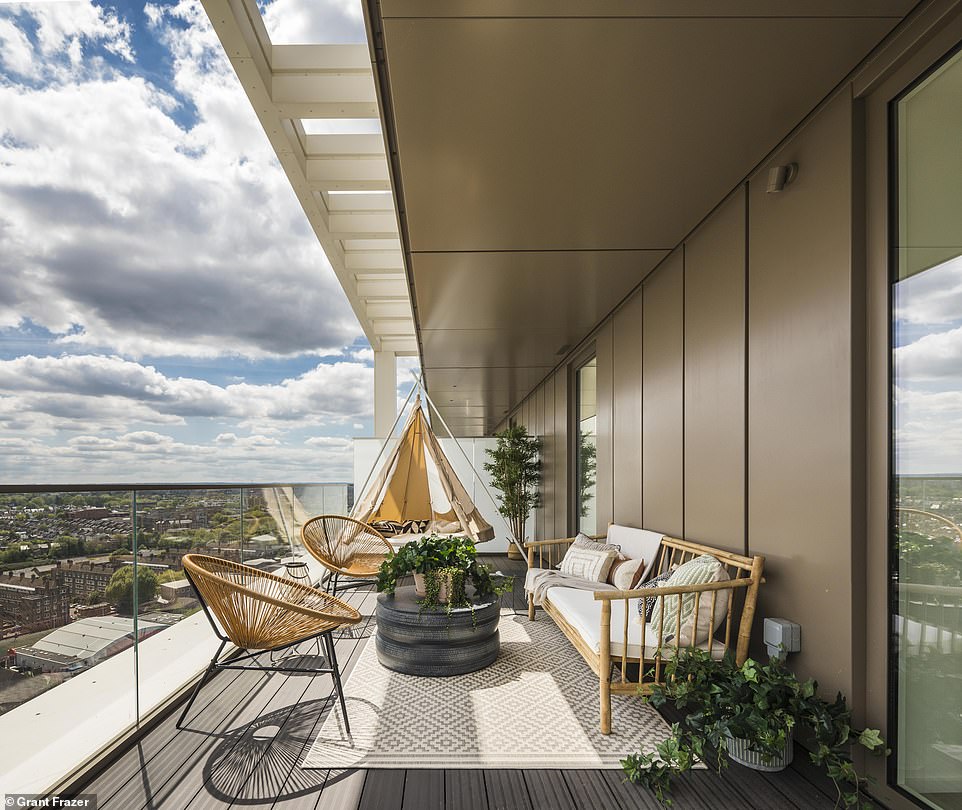 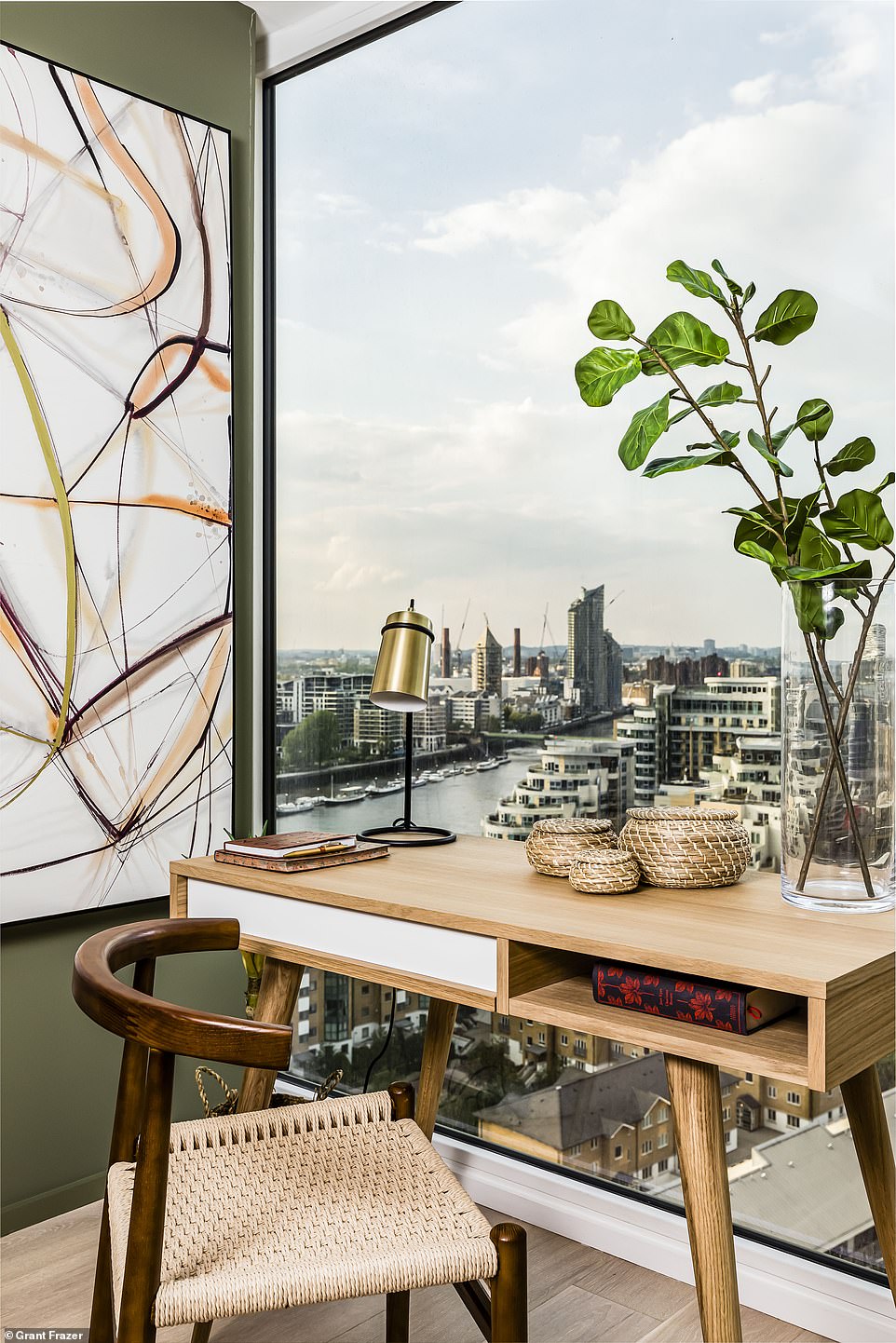 Bedrooms feature curtain windows looking out onto the spectacular views of south London, bringing stunning natural light into the room 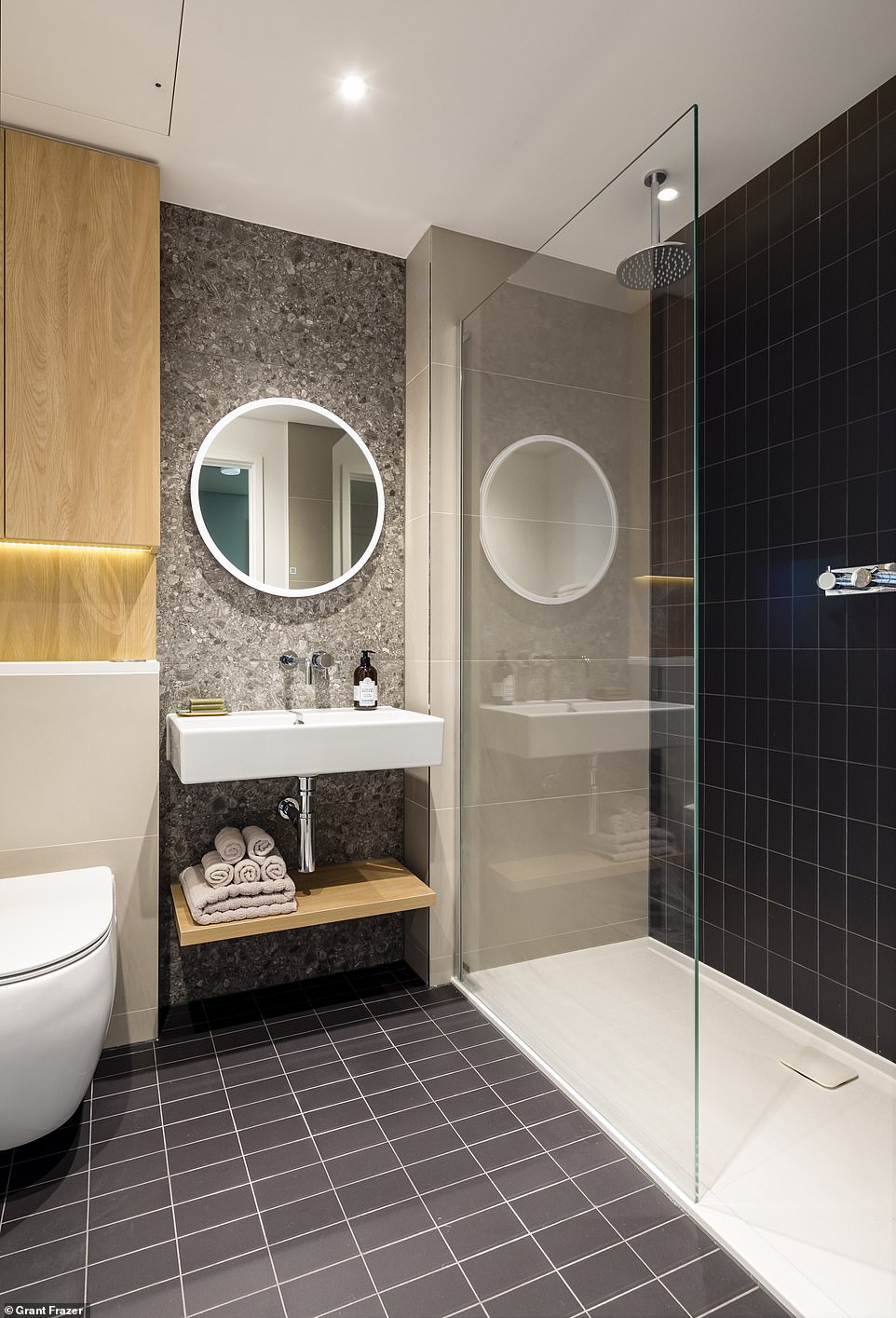 Their latest project, the Terrace Collection, will launch later this autumn – offering 25 apartments, each with an impressive balcony overlooking London.

A vibrant two-bedroom show apartment by Gordon Duff & Linton boasts a magnificent balcony accessed from the living area and main bedroom, with views towards the River Thames and across South London.

In the main living area, oak panelling has been used, with the designer kitchen’s sleek units complementing the warm green tones chosen. There are pops of print, with leafy houseplants and chic wall-hangings.

Meanwhile the on-trend panelling is continued in the main bedroom, where doors lead onto the private balcony.

The balcony has been styled in two zones; an al fresco dining area, perfect for entertaining friends, and a relaxed seating area with fun ‘tipi’ style hanging chair ideal for relaxing in the summer sunshine.

Despite lockdown restrictions, Coda continues to prove highly sought-after, with Avanton reporting they are averaging 20 viewings per week, with buyers coming from London, Europe, and the Middle East.