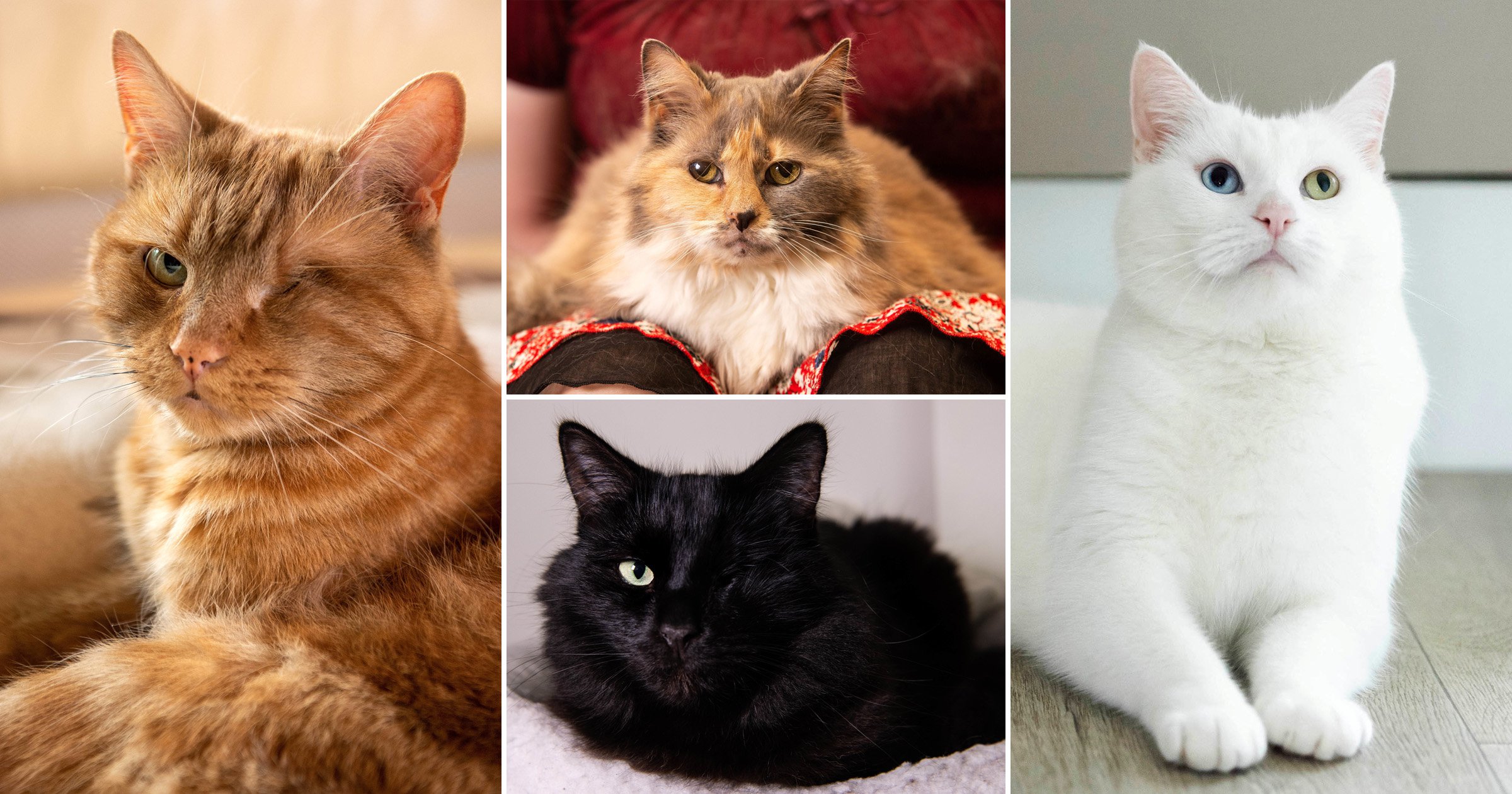 Next week is the final of the National Cat Awards 2021, so let’s coo over the top four in the running for best cat.

The awards are the UK’s biggest celebration of pet cats, and the final four had tough competition.

After a public vote, the cats in the running for the title were whittled down.

Now, a panel of seven celebrity judges will crown a winner on Thursday, August 12.

These are the four cute contenders who’ve already won one award, and are now going for their second.

Winner of the Furr-ever Friends award, Minty was honoured for friendship between cats and children.

He gives support tp Connor, who has ataxic cerebral palsy, which affects his physical, mental and emotional development.

Helping Connor cope with daily life, the cat keeps him settled at meal-times and is a calming presence at bedtime.

When Connor is struggling, Minty will spring into him and nuzzle up close to help calm him.

The caring puss – who only has three legs following a road accident – even helped Connor learn to climb the stairs.

Minty’s owner and Connor’s mum Siobhan Cobb, 31, said: ‘I’m over the moon that Minty has been recognised for the special cat that he is.

‘He is a huge part of our family unit and it is lovely to share the unique bond the boys have.

‘Minty demonstrates how clever, affectionate and dependable cats can be. We can always rely on him to make everything better, and he is the best friend that Connor needs and deserves.

‘Having only three legs never stops Minty enjoying life, and I think that rubs off on Connor. Together, they are unstoppable, whatever comes their way. Minty’s a really inspirational cat and we love him to bits.’

Mikey is a loving rescue cat, living in Southend-on-Sea, Essex.

He helped his owner, Jessica Barnard, cope after her baby was stillborn in 2017.

With partner Connor required to return to his army posting shortly after, Jessica struggled to cope with her loss, and retreated away from family and friends.

But Mikey made life brighter after a friend suggested she take him in – and she returned the favour to the former stray who lost an eye due to abscess.

Jessica said: ‘I think Mikey’s story shows that however much help rescue cats may need, you should never underestimate how much they have to offer.

‘Mikey and I found each other when we both needed each other the most. When I think back to that time, it was very hard for us both but we got through the tough times together.

‘Things are much brighter now, and it’s brilliant to now be able to share the good times with Mikey.

‘There’s nothing like the feeling of knowing you’ve helped each other, and we have such a strong bond as a result. I hope this story will inspire many more people to adopt a rescue cat – with so many cats in need of homes, there’s a Mikey out there for everyone.’

Penelope Farthing, from Shrewton, Salisbury, can sense when her owner is about to have a debilitating seizure.

She won the Most Caring Cat award, which celebrates cats that positively impact their owner’s health and wellbeing.

The eight-year-old cat raises the alarm when owner Zoe Elliott, 28, has seizures – she has a range of complex medical issues including craniocervical instability and Ehlers-Danlos syndrome.

Zoe previously needed surgery to help her hold her head up, and she is prone to breaking or dislocating bones. Terrifying seizures can come without warning.

Zoe said: ‘Penelope is an amazing cat and things would have been a lot harder for me if it wasn’t for her.

‘However tough things have been over the past few years, it’s always been made better by having her by my side.

‘I really hope Penelope will help more people realise how amazing cats can be for people with complex health conditions.

‘Raising the alarm when I’m having a seizure has been incredible, but she’s done so much more. She’s been there to cheer me up when I’ve been down and keep me company when I was very ill or recovering from surgery.’

Boris, of Blackheath, London, recovered from injuries and is now a loyal and dedicated companion to 80-year-old Alex Tullis.

Boris won the Purina Better Together award, which marks the special bond between owners and their cats that has transformed both their lives.

Alex suffered a major stroke in 2015, but was determined to recover.

When Boris was later hit by a car, Alex was just as committed to ensuring the cat got all the help he needed to heal.

Alex’s daughter Caroline Epps said: ‘Boris is a wonderful cat and is a shining example of what an incredible support cats can be for older people.

‘Not only has he been there as a comforting and constant companion, he has also given my Dad something to focus on when things have been hard.

‘I really hope that their story will help more people value how important cats can be for older people.

‘Dad has never felt lonely when he has Boris by his side, and it’s a great comfort to me to know he has a faithful friend. You only have to spend a few minutes with them to see the massive impact he has had on my dad’s health and wellbeing.’

Cats Protection’s award organiser Kate Bunting said: ‘The National Cat Awards is all about celebrating everything we love about cats, from their fun-loving antics to the comfort and companionship they bring to so many people.

‘Over the past 18 months, many of us have appreciated the presence of a pet cat in the home, so this year’s National Cat Awards is particularly special.

‘Our final four cats have all made a huge impact on their owner’s lives and we know our judges are going to have a tricky job to select the overall winner.’

The awards, sponsored by Purina, is the biggest celebration of the real-life feline stories of loyalty and companionship – all of these cats have helped their owners significantly.

Dragon’s Den star Deborah Meaden, who is involved with the awards, said: ‘Humans are definitely better with their pets, I couldn’t imagine life without my cats.’

The event will be held online this year due to the pandemic.