Meghan Markle says the ‘bad voices’ on social media are ‘so loud and damaging’ – after admitting she quit her accounts for her own self preservation.

This afternoon the Duke and Duchess of Sussex hosted a special edition of TIME100 Talks about the ‘state of our digital experience’.

Meghan and Prince Harry also said they’re ’embracing every moment’ of spending more time with their son Archie during the pandemic.

Presented in partnership with P&G and themed around the topic of ‘Engineering a Better World,’ the special episode tied into Harry, 35, and Meghan’s desire to build online communities that are more compassionate, safe, and trustworthy.

Speaking to Time Editor in Chief Edward Felsenthal, Meghan said: ‘We are trying to embrace all the quality time we get with our son and embrace very moment of his growth and development.’ 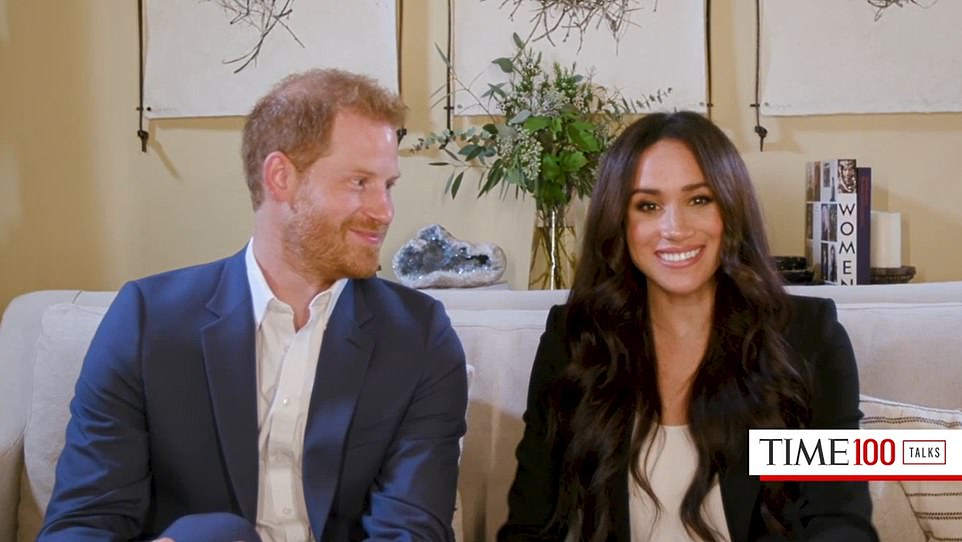 Asked how they are doing, Harry pointed out that before 2020, the question was one people ‘threw around’ – but he reported that they’re ‘good’, adding: ‘There’s a lot of stuff to be focused on, a lot of work.

‘This is an opportunity to spend more time as a family than we probably would otherwise.’

The episode featured conversations with a range of guests, including Reddit co-founder and founder of 776 Alexis Ohanian, and Rappler CEO and executive editor Maria Ressa.

Alexis admitted that investing in tools to reduce ‘toxicity’ is something the industry ‘put off’ for a long time. 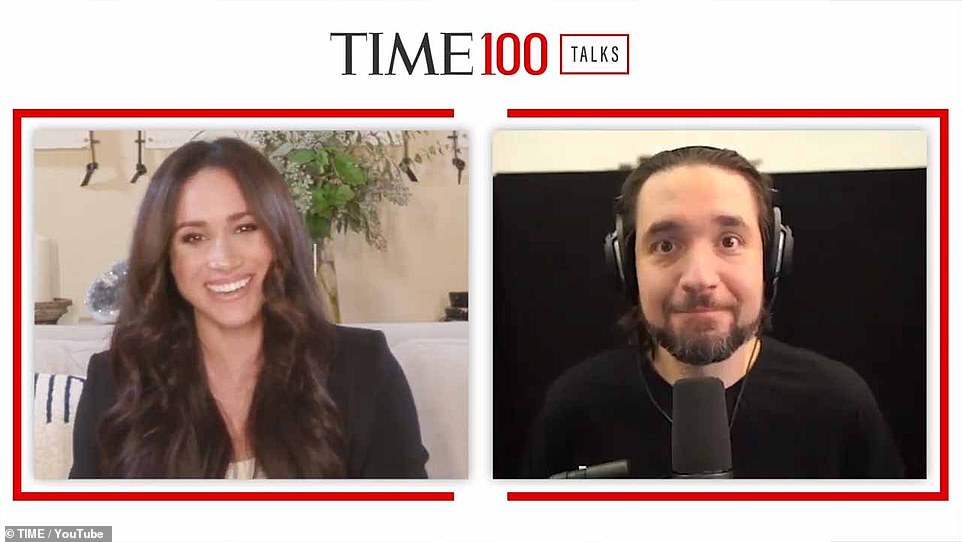 During her conversation with Alexis, Serena Williams’ husband, who spent 15 years building the Reddit platform, the duo discussing trolling

Meghan told how she read about an employee of YoutTube filing for PTSD because of the stress they took home every day.

‘Can you imagine carrying that every day, it’s everyone who ends up affected by it,’ she said. ‘The good outweighs the bad but goodness the bad can be so loud the damage that happens as a result of that.

‘You tweeted recently we haven’t begun to realise the legacy and effect of these platforms and the online space and what it is doing to us on a deeper level. We’re in it now but we have a chance to get ourselves out of it.’

Meghan recently insisted that all social media users are like ‘people who are addicted to drugs’ during her latest virtual summit appearance – despite spending many years as a prolific Instagram user. She drew the bold comparison during Fortune’s Most Powerful Women Next Gen Virtual Summit – an online event that was reserved for invited guests willing to pay a $1,750 fee.

She told Fortune associate editor Emma Hinchliffe that she has ‘not been on social media for a very long time’ – despite sharing an official Sussex Royal account with Prince Harry for several years before they stepped down as senior royals.

Meghan and Alexis also discussed online hate and extremist indoctrination, with Alexis observing how easy it is to commune with people online in the same way as offline.

‘The reality is we all have examples now of people who have built very close relationships with people they don’t even know,’ he said.

‘It is not a leap to consider the effects of that this does for recruiting these abhorrent ideologies… What sometimes gets waved off as a joke is a way to normalize really problematic behavior and in the next ten year’s we’ll have to figure out how to bring a lot of those folks back.’

Meghan referenced a statistic published in the Wall Street Journal which claimed 66 per cent of people joining extremist groups is because it’s been recommended to them.

‘This gateway that takes you down a path you weren’t even intending to go, but the adverse effect of that is tremendous,’ she said.

Those featured in the episode also included Center for Humane Technology president and co-founder Tristan Harris, activist and founder of The Loveland Foundation Rachel Cargle, author and co-director of the UCLA Center for Critical Internet Inquiry Safiya U. Noble.

Disinformation researcher Renée DiResta, Somewhere Good founder Naj Austin, and the hosts of Teenager Therapy, with whom the Sussexes recorded a podcast earlier this month, also made an appearance.

Last week a photograph of the couple was released ahead of the event, showing beaming mother-of-one Meghan alongside her husband of two years, who has a protective arm behind her.

In the black and white image the pair are wearing matching outfits, with Harry, whose hair appears to be receding, going without a tie and leaving his top button open in his trademark casual style. 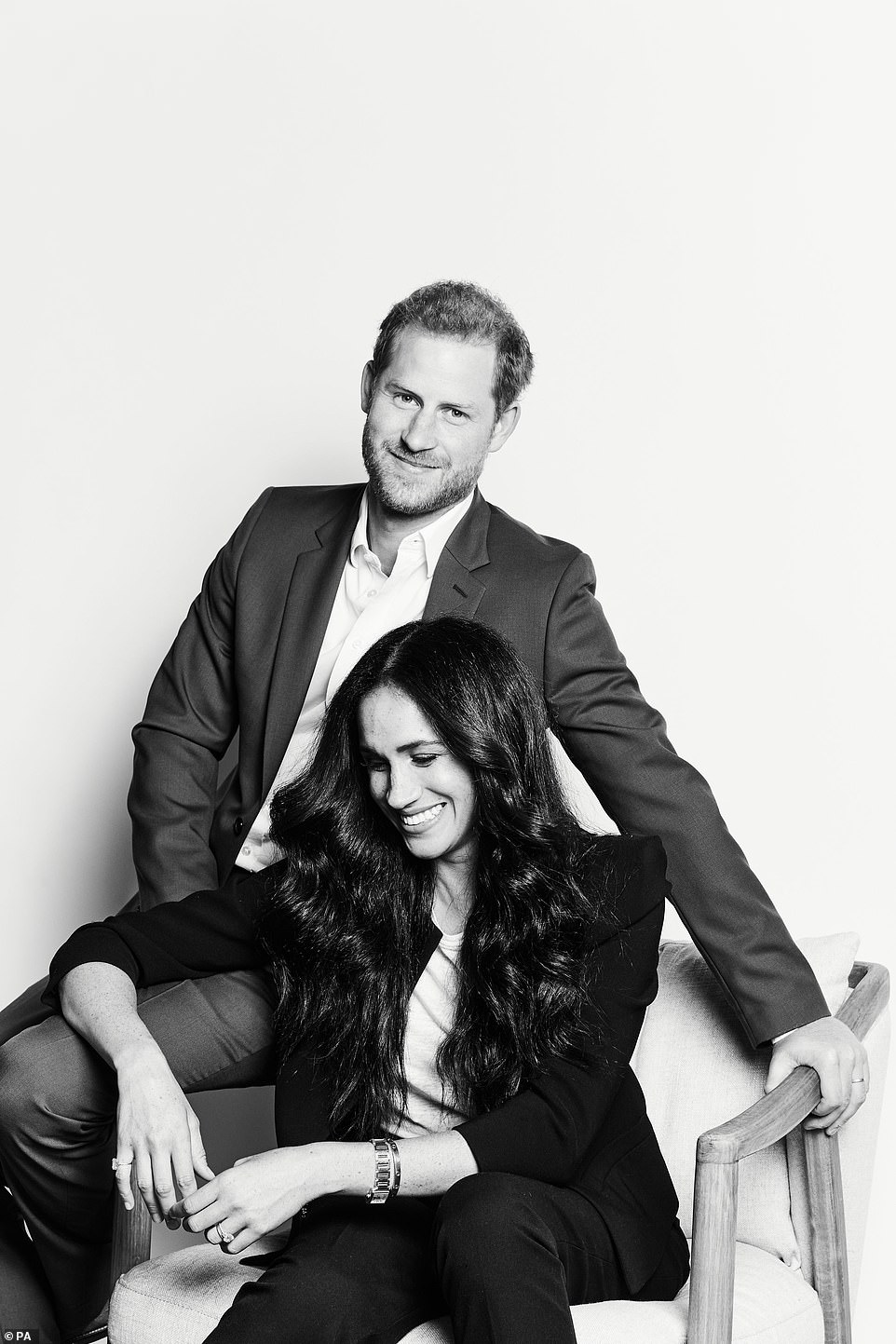 Last week a photograph of the couple was released ahead of the event, showing beaming mother-of-one Meghan alongside her husband of two years, who has a protective arm behind her

On her wrist, she has a Cartier ‘Love’ Bracelet worth $6500 (£5,031), as well as what appears to be Princess Diana’s gold Cartier Tank Française watch.

TIME editor in chief and CEO Edward Felsenthal commented: ‘Since launching in April, TIME100 Talks has focused on solutions and visions of a better future through conversations with extraordinary leaders from around the world.’

The Duke and Duchess of Sussex have recently been outspoken on a range of hot-button issues including the addictive nature of social media, Black Lives Matter and voter suppression. They joined Malala Yousafzai for a virtual chat earlier this month (pictured)

‘This special episode marks our first collaboration, and we are thrilled to partner with The Duke and Duchess of Sussex to explore these urgent issues.’

Dan Macsai, TIME executive editor and editorial director of the TIME100, added: ‘The Duke and Duchess of Sussex, both TIME100 alumni, are among the most influential voices in the world.

‘We look forward to working with them to elevate essential voices and highlight real solutions to some of the most pressing issues of our time.’

The Duke and Duchess of Sussex have recently been outspoken on a range of hot-button issues including the addictive nature of social media, Black Lives Matter and voter suppression.

It has generated more than 50 million video views across TIME’s platforms since launching in April.