Michael Palin is back on the road! After vowing he may never travel again – at 79 he journeys through Iraq

Three years ago, Michael Palin feared he might never travel again after the much-loved star of TV series such as Around The World In 80 Days and Pole To Pole had open-heart surgery. ‘The main problem was that almost as soon as I felt better, the pandemic arrived and no one was going anywhere at all,’ he says.

Now Michael, 79, is back on the road for a new three-part series in which he journeys through Iraq, one of the world’s most dangerous countries, following the Tigris river for over 1,000 miles from its source in eastern Turkey to the Persian Gulf.

In the city of Mosul, which saw many of its religious buildings destroyed and around 10,000 people killed after it was captured by extremist group ISIS in 2014, the usually jolly Michael looks visibly upset as he wanders through the ruins and meets some of the children. 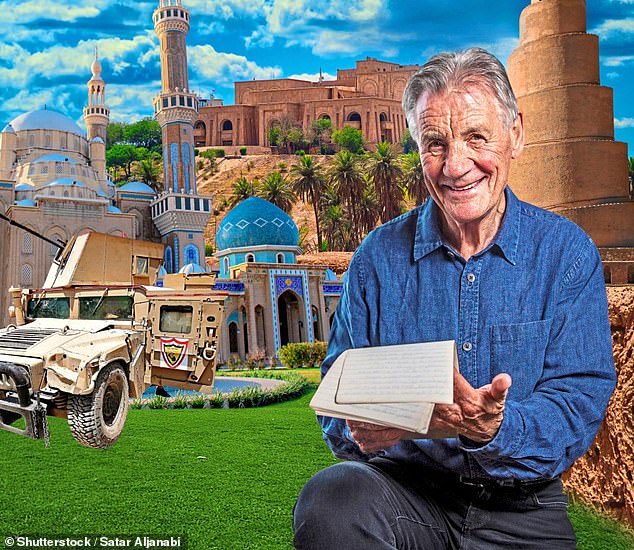 Michael Palin visits (l-r) Erbil, Babylon and Samarra on his trek. Below left: an armoured vehicle during the liberation of Mosul

‘They showed me around and let me fire their catapults, and that was very moving,’ he says. ‘I was close to tears walking through those ruined streets.’

He then visits the village of Akre when it’s the Kurdish New Year, and joins in with the celebrations. It’s noisy and chaotic, and ends with a torchlit procession up a mountain, which Michael describes as ‘Glastonbury meets Apocalypse Now’.

Iraq’s oil sector makes up around 90% of its economy, but it’s also the cause of many of its problems – much of this money has disappeared.

From there, he travels to the desert oilfields of Kirkuk where the British, who formed Iraq by ‘cobbling together’ the disparate provinces of Basra, Baghdad and Mosul after the First World War, discovered oil in 1927.

Next it’s on to Tikrit, the birthplace of Saddam Hussein who ruled Iraq from 1979 to 2003 and built numerous monuments and palaces.

The city was also captured by ISIS in 2014 and it was in a former palace compound of Hussein’s that around 1,700 Shia Muslim cadets were massacred by Sunni extremists, another grim reminder of the bloodshed Iraq has seen. ‘My natural optimism took a beating,’ Michael admits.

Finally he heads on to the capital Baghdad and deeper into the south. ‘You realise how ungovernable Iraq is,’ he says.

‘There are so many militias, so many religious groups. It’s a wonder the country functions at all. But the archaeological history is extraordinary – it’s the greatest thing about Iraq.’