The best comedies reside in darkness. The best moments from classics such as Roseanne and All In The Family, for example, are those where the comedy leans deeply into the drama, where grief and loss overtake the slapstick, and where humour serves as the light at the end of a humanity-stripped-bare tunnel.

One might imagine comedian and screenwriter Josh Thomas learned those lessons from the masters, assuming – given his age – he caught either of those shows in a television museum somewhere. But in truth they somehow come from deep in his own lived experience. 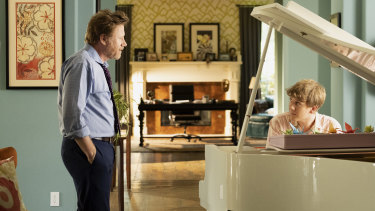 Christopher May and Josh Thomas in a scene from Everything’s Gonna Be Okay.Credit:Freeform/Tony Rivetti

Please Like Me, the series he wrote and starred in for the ABC, drew from his own experiences with love, grief and loss, and presented them in the awkward but charming vessel of an Australian sitcom. Everything's Gonna Be Okay, his new American comedy series, polishes them with American culture's elevated production values and smoother edges. It somehow seems bigger but it's not. The tonal points are all there.

Thomas plays Nicholas, a young, gay Australian man on holiday visiting his American father, and his two half-sisters, Matilda (Kayla Cromer) and Genevieve (Maeve Press). His father Darren (Christopher May) drops a bombshell cancer diagnosis with a grim outlook – he does not have long to live – and he is hoping Nicholas will become custodian of the two younger siblings.

Thrown into all of that is Alex (Adam Faison), a holiday romance for Nicholas, which looks certain to morph into a more serious relationship. Alex might seem peripheral to the narrative but he's a useful way to defuse some of the moments in the opening episodes where the emotional notes become entangled. Faison plays Alex's bewilderment brilliantly. Like us, he's not sure how to navigate the tonally darker exchanges between father and son.

Everything's Gonna Be Okay is delightful. It's uncomfortably honest at times. And if you're easily moved to tears it has a few of those TV moments that kind of break you. If they'd made this in the 1980s it would have been "a very special episode" of a less authentic comedy. Unfurled into an entire series on its own it's daunting. But mercifully Thomas knows how to find those touches without losing them in schmaltz.

Indeed it works largely because Thomas comes at it with great authenticity and a genuine curiosity about human foibles. Though Nicholas isn't Thomas – unlike Please Like Me, writer/actor and character do not share the same name – but the two are more or less indistinguishable. On screen Nicholas plays with all of Thomas' awkward observation and preying mantis-like physicality. 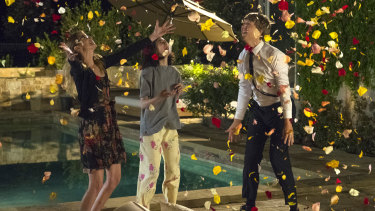 Unsurprisingly, getting the setup right leans heavily on Christopher May, who does a brilliant job of playing the soon-to-be-gone father Darren with a heartbreaking mixture of resignation, good planning and an underlying fear that Nicholas may not be up to the task.

And Cromer and Press are written and performed with a certain natural authenticity that brings it all together nicely. Both Cromer, the actress, and her character, Matilda, are on the autism spectrum. If both younger actresses were not willing to bring everything they have to the table it might all unravel.

The net effect is messy, awkward and feels awfully real at times. (Set to a tender, melancholy soundtrack.) Unlike most American comedies Everything's Gonna Be Okay does not offer up easy answers. Nor does it hope to polish the picture until it gleams. It's content to meander around its characters' mistakes and stumble on the wrinkles. And that's perfectly sweet.

Everything's Going To Be OK is currently streaming on Stan, which is owned by Nine, the publisher of this masthead.