Scott Morrison has surprised his opponents before and is in a strong position to do it again when voters are clearly receptive to his message about the pandemic.

Morrison has a consistent edge over Labor leader Anthony Albanese when Australians are asked to choose between the two of them, and it not just about which of them is the preferred prime minister. 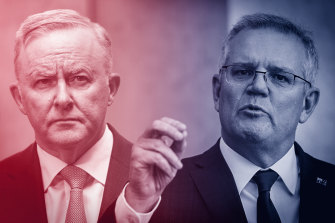 Three years to the day since Morrison became prime minister, the latest Resolve Political Monitor shows he continues to outsmart Labor critics who thought he would fail after winning a messy leadership struggle.

Asked to name the party and leader who is best to run the country, 37 per cent name Morrison and the Coalition while 21 per cent name Albanese and Labor. Another 30 per cent are undecided and 12 per cent want someone else, but the lead for the incumbent is real and significant.

This was not the Labor plan when Albanese hardened his attack on Morrison over the past few weeks by promising a $300 payment for every adult who was vaccinated. The cash offer intensified the Labor charge that Morrison had failed his two biggest jobs: vaccines and quarantine.

And the doubts about Morrison inside Parliament House, where some of his own MPs admit he sermonises too much, are not so evident outside.

These personal attributes do not decide elections, but they influence them. And the pattern is the same across a range of factors. The Labor primary vote is down from 35 to 32 per cent, while the Coalition primary vote is up from 38 to 40 per cent.

All of the Coalition gain came from male voters because the primary vote among women did not budge. Even so, Morrison has more support among women than many commentators assume. Asked to nominate their preferred prime minister, 42 per cent of women name Morrison and 20 per cent name Albanese.

There are important caveats on all these results. The survey asked questions of 1,607 people from Tuesday to Saturday last week, so it reflected a point in time when Morrison was gradually toughening his language about moving on from lockdowns.

This could be an early indicator that Morrison’s new message will resonate with voters. It is too soon to be sure.

Some of the polling also overlapped with Morrison’s announcement last Thursday that people aged from 16 to 39 could start getting the Pfizer vaccine, even though that news took states and territories by surprise and did not come with any additional supply.

The margin of error is 2.5 percentage points. While the results suggest the Coalition has a narrow lead over Labor in two-party terms, assuming preferences flow as they did at the last election, this is within the margin of error.

Another caveat is that voters may very well say they support independent candidates over the major parties, as 10 per cent said in this survey, but their choices could narrow when the election comes. The electorate remains volatile, with more than a quarter of people saying they are “uncommitted” with their votes.

The Labor primary vote is higher in other surveys, as much as 39 per cent, so some Labor loyalists do not accept the number could be as low as 32 per cent. That is their call, but it was 33 per cent at the last election.

Morrison has been found wanting at key points in the pandemic. He did not move fast enough to secure vaccines, immunise aged care residents and protect some of the most vulnerable. But coronavirus deaths in Australia are a fraction of those in other countries and voters rate Morrison well on managing the crisis.

The Albanese support team may like to think he is cruising to the finish line in fourth gear with plenty of fuel. This survey suggests he is in third gear, losing speed and will only win if he bolts a jet pack to the roof.

The message to Labor? Do not underestimate your opponent.