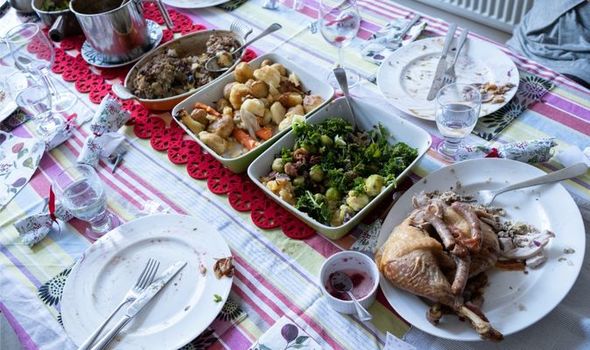 Top festive arguments include someone interfering with the cooking of the roast, old feuds being aired out, and people getting too invested in boardgame rules.

But these squabbles are what makes family life as great as it is, according to half of respondents.

The research was commissioned by Lottoland.co.uk, in conjunction with the Christmas Lotto, which offers a guaranteed prize win during the festive season.

A spokesman said: “It’s a rare family indeed that can get through the whole season without any disagreements.

“This is likely to be especially troublesome this year, as many people will have got really used to their own space, after all the lockdowns.

“So, adding in extended family, kids, pets and who knows what else, can definitely come together to bring things to boiling point.”

British families will even find time to argue about who has to sit on the floor in the lounge because there aren’t any seats left, and whether or not to tune in the Queen’s Speech.

In Christmases past, another fifth have disagreed over what movie to watch, while 15 percent have kicked off over someone trying to make them eat or drink more than they wanted.

Politics was deemed the most likely conversation to spark a family row, selected by 36 percent of respondents.

One in five (22 percent) can’t have a conversation about money without it descending into chaos, and a tenth can’t even talk about the weather for fear of starting a row.

However, 41 percent say their arguments can be put down to it being “just family”, while 26 percent blame overdoing it on the Christmas spirits.

Another third believe Christmas is simply too much time spent in one go in close proximity to other family members.

Siblings were deemed the most mischievous at this time of year and likely to instigate arguments (18 percent), while 11 percent point the finger at their mother-in-law.

More than half (56 percent) say the big day simply wouldn’t be the same without the odd disagreement here and there.

And nearly a quarter (24 percent) admit to sneakily looking forward to the moment one of their family members makes a totally inappropriate comment.

But 48 percent try and stagger the arrival of guests with volatile histories, according to the research conducted through OnePoll.com.

Lottoland’s spokesman added: “Hosting Christmas can be a big stress, especially if you have family members who don’t get on.

“From trying to cook a roast that will please everyone, to keeping the peace during Monopoly, bringing the family together can be tense and wonderful in equal measure.

“It’s no wonder the Christmas Lotto is so popular at this time of year, with families, friends and neighbours all pooling together to buy tickets.”

To participate in the Christmas Lotto for £1.99, visit here.