A mum is sending a stark warning to others after she discovered a cancerous mole during her pregnancy.

Mum-of-two, Claire Chisnall, 39, from Coventry, West Midlands, was 20 weeks pregnant when she was told by medics that an itchy mole on her leg was a deadly form of skin cancer known as melanoma.

After previously using sunbeds and avoiding wearing sun cream on holidays in a bid to get the best tan possible, she’s urging others to take care of their skin in the sun after being left in fear for her life. Claire Chisnall, 39, from Coventry, West Midlands, who avoided wearing sun cream on holidays in a bid to get the best tan possible, found out she had skin cancer when she was 20 weeks pregnant 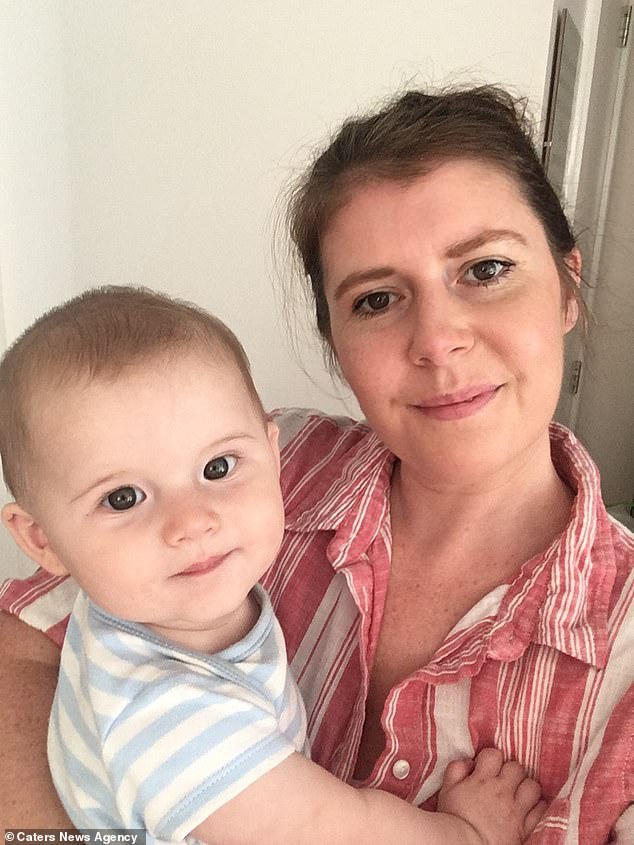 Claire had been wearing nylon trousers at work and had felt an itch which she had assumed was a small leg hair that was getting caught.

She said: ‘I kept feeling a sort of itch in the same place, so one day I just thought I’d check and just see if there was anything there.

‘When I looked I realised I had a mole. It was about 5mm wide and it was darker than my others.

‘I knew that itchiness was a bad sign when it came to moles. 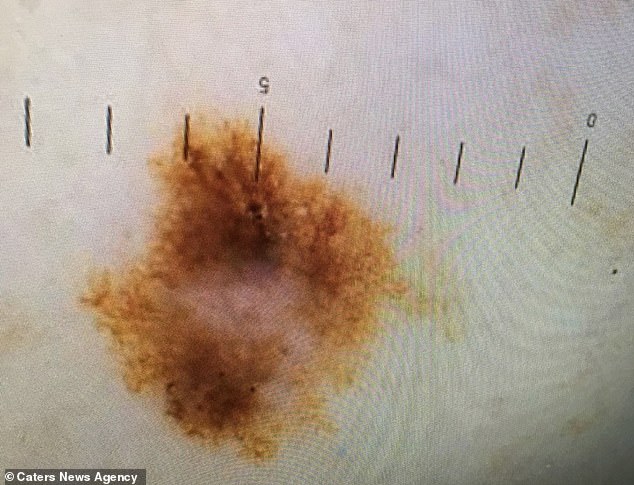 The mole on Claire’s leg that turned out to be melanoma. She had it checked by a dermatologist, but didn’t expect it to be anything serious 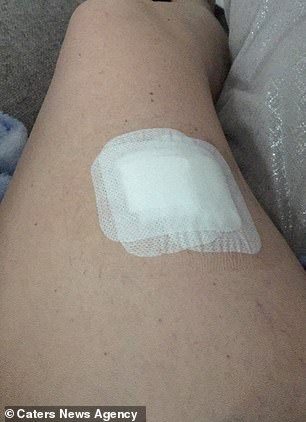 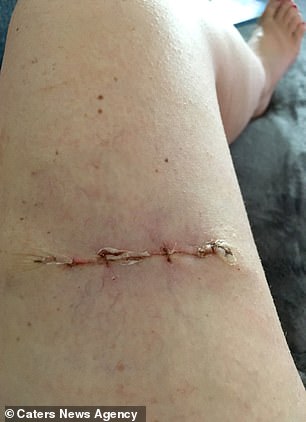 Claire’s leg after having the cancerous mole removed. She then faced an anxious wait to find out if her unborn baby was affected

‘I was around 20 weeks pregnant and I had a doctors appointment book as I was suffering from really bad morning sickness.

‘So I thought I’d just mention the mole as a sort of secondary problem. I didn’t think much of it at first.’

Claire was referred to a dermatologist who checked her mole and received the results that she would never have expected one week later.

She says that she walked into the room to receive her results and there was a Macmillan nurse sat waiting for her. 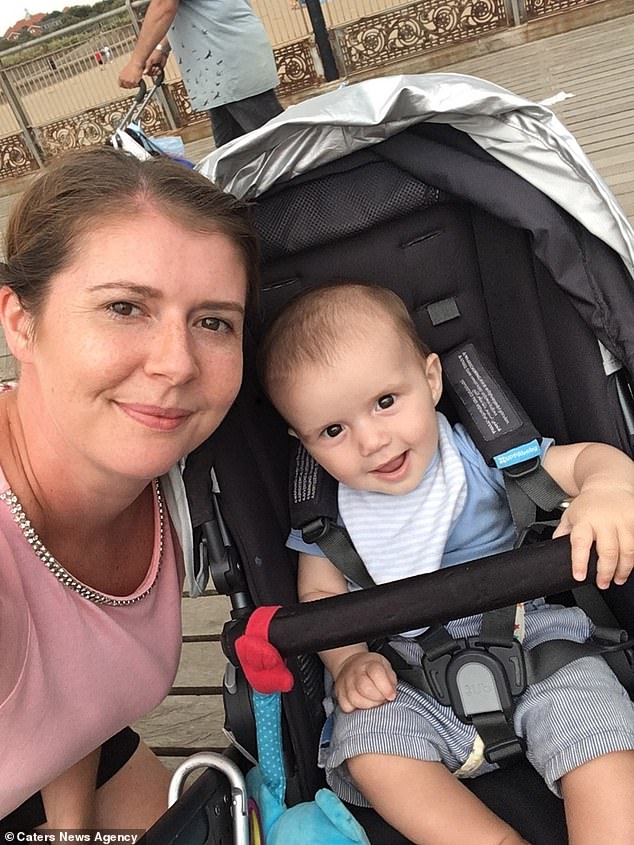 Claire, pictured with her son Cody, initially wen to see the GP because she had bad morning sickness, and mentioned the mole as a secondary issue

Claire added: ‘My stomach dropped and I knew instantly that they were going to give me bad news as soon as I saw the Macmillan nurse sitting there in the room too.

‘They told me that they had found melanoma and I was going to need surgery to remove it.

‘I don’t think the news really registered with me until I started to read more about it. That’s when the anxiety hit and I was in fear for my life.

‘It consumed me. I had also lost my mother-in-law to melanoma. Her mole was also in the exact same place as mine, on my right thigh. So I knew first-hand just how deadly this could be.

‘I also worried about how this could affect my unborn baby. 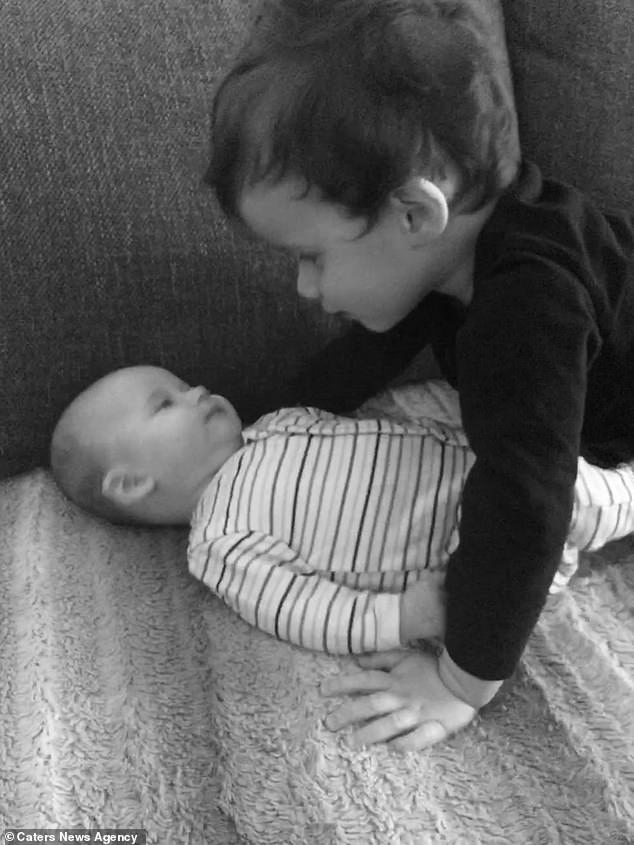 Claire’s sons Cody, left, and Blake, right. She said she’s extremely grateful to be here to see her children grow up

‘I was panicking that he and my eldest son, Blake, now 3, were going to grow up without their mum. It was terrifying.’

Claire had to wait until she had given birth to her son, Cody, now one, for her placenta to be checked to see if it had spread to her baby, although this is extrememly rare and there have only been a small number of suspected cases worldwide.

She says that she had to wait an additional 10 weeks for the results.

Claire added: ‘It was awful having to wait such a long time to find out whether it had affected Cody. This added even more to my anxiety.

‘But luckily it had not spread to him. I was so happy to find that out.

MELANOMA IS THE MOST DANGEROUS FORM OF SKIN CANCER

Melanoma is the most dangerous form of skin cancer. It happens after the DNA in skin cells is damaged (typically due to harmful UV rays) and then not repaired so it triggers mutations that can form malignant tumors.

Around 15,900 new cases occur every year in the UK, with 2,285 Britons dying from the disease in 2016, according to Cancer Research UK statistics.

The patient can decide to use a skin graft if the surgery has left behind discoloration or an indent.

This is needed if the cancer reaches stage III or IV. That means that the cancerous cells have spread to the lymph nodes or other organs in the body.

‘Skin cancer isn’t just a case of getting it removed and then everything will be fine. It can kill you and it’s serious.

‘I would urge anyone who feels like they need a tan to just wear fake tan or get a spray tan. It’s not worth the danger.’

Claire would previously use sunbeds and cover herself in tanning oil or extremely low factor creams in order to achieve a perfect golden tan.

But instead, she said she would just burn her skin.

Since finding the cancerous mole, Claire doesn’t leave the house without having factor 50 sun cream on her skin.

She said: ‘I want to get it out there and try and get as many people as possible to stop using sunbeds. They are scarily dangerous.

‘I now always have a high factor sun cream with me, I even have some in my car for when I am driving. It is so important.

‘The SPF in makeup is also not enough to protect you, we need to be wearing higher factors under our make up too.

‘After discovering my mole, I pretty much spent a year as a vampire as I was so terrified of the sun. But I have now learnt how to protect myself and my family properly.

‘Skin cancer is preventable if we just make sure we are being careful with sun exposure.

‘It is not worth risking your life for a lovely suntan, I have learnt this the hard way.

‘But I am just so grateful that I am here and able to watch my kids grow up..’

To support Sarah with a petition to ban sunbeds, visit melanoma.org.uk