Just after 11pm on July 2, a group of people will be taking their first steps up a rocky trail in the Lake District towards the summit of England’s highest mountain, Scafell Pike, in the dark.

They’ll be doing it as part of this year’s Metro.co.uk Lifeline campaign, which is raising money for PAPYRUS Prevention of Young Suicide.

Among them will be Metro readers and staff, as well as supporters of the charity, and its team.

There are many reasons people have signed up to this amazing challenge, and we wanted to share them.

Here, two of our trekkers share their incredibly heartbreaking stories behind why they are heading to the Lake District with us to climb a mountain at midnight.

I just remember giving her a kiss and a cuddle, all the while thinking “this can’t be real” 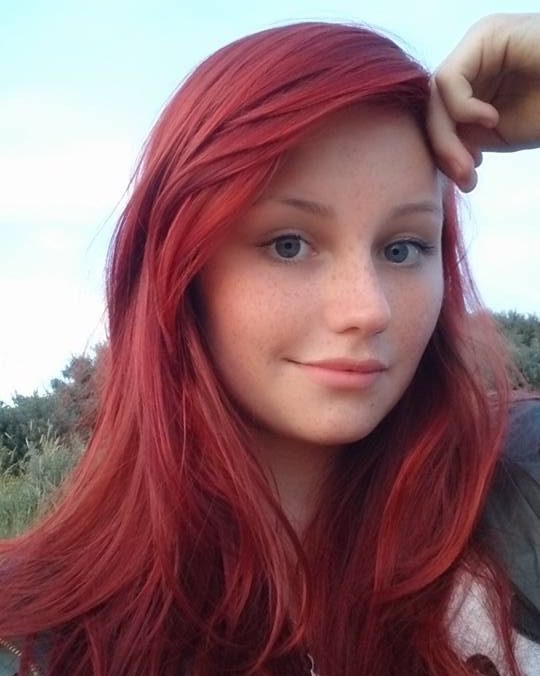 It was a Thursday night. I ate pizza and watched a movie with my oldest daughter, 17-year-old Grace. At the end of the evening, we said ‘I love you’ and went to bed.

The next morning, I got up and went to work. I didn’t see Grace before I went but I had a text conversation with her that morning and we agreed that I’d pick up an Indian takeaway on my way back, to have for dinner. Our conversation was normal.

It was when I got home at 4.30pm and walked into the kitchen that I found Grace. She had taken her own life. I knew immediately she had been gone for several hours, it was too late.

I phoned an ambulance and lay on the floor hugging her, sobbing.

How can I describe Grace? She was just awesome; a happy, smiley person who everyone loved. She was a talented artist and what I would describe as a magical person. She attracted animals everywhere she went; she was like Dr Dolitttle and they’d flock to her. I was incredibly proud of my daughter – she worked in an ice cream bar where we lived and I used to have people complimenting me in the street, about what a lovely girl she was.

When the paramedics arrived that day, and hooked her up to a machine, I remember watching in horror, waiting for it to start beeping, to signify life – but it never did.

The  next thing I knew, the house was swamped and it automatically became a crime scene, meaning that I wasn’t allowed back in to see my baby girl. The paramedics and police were there for hours. No film I’ve ever seen depicts the true craziness and horror.

I remember the flashes of the camera as they took photos, but not much else. I didn’t realise it at the time but I was in shock. I cried and screamed for hours after but not a single tear came out of my eyes, as it didn’t even feel real.

Even when they were taking her away, they invited me into the back of the ambulance to say goodbye. I just remember giving her a kiss and a cuddle, all the while thinking ‘this can’t be real, this can’t be happening to us.’

It’s been three years and I still have moments like that now. Some days I still wake up and think it’s not real. And just the other day, a good friend came round to see me and just hugged me while I cried. It’s still hard to accept that Grace has really gone. I remember hearing about other people losing family members to suicide and feeling so sorry for them, and now it’s happened to me.

But it’s not just me – my youngest daughter Abbie, who was 11 at the time and is now 14, has lost her big sister. The person that she’d mess around with, wind up, laugh with, learn about make up from – they loved each other so much and Grace was an amazing, protective big sister.

Abbie was staying with her dad when it happened. How do you tell an 11 year old that her sister has taken her own life? I just remember telling her that Grace’s head was poorly and that she didn’t want to be living here any more. But Abbie is autistic and she wanted facts – so I had to go into quite a bit of detail with her, to help her understand. This was difficult but also strangely cathartic.

We lost Grace on April 6th, 2019. The autumn before that she’d gone to the doctor to ask for help, and had been given medication – it was confirmed at the post mortem that she had been taking this. She’d also been seeking counselling but services are so stretched that she hadn’t been able to speak to anyone yet.

To everyone looking in, Grace seemed fine. She was learning to drive, starting A levels, making plans for her life – and asking for the help she needed.

Our situation just goes to show that young minds need looking after, they need understanding, and support. PAPYRUS is an incredible charity who focus on suicide prevention and helping young people who are struggling, and their families with how to support them.

I’d do anything to help ensure that no other families have to go through what we’ve been through, which is I’m taking part in the Lifeline challenge with my dear friend Allan, an old family friend who’s known Grace since she was a baby. I can’t wait to get out there, push myself, and raise money for such a brilliant cause.

There’s something so significant about walking through the night and still being on the mountain for sunrise – I think it symbolises the fact that there’s always another tomorrow. Even if it’s cloudy and you can’t always see it, it’s always there.

You never move on from losing a child to suicide, but you continue to live. Our lives will never be the same again. After Grace’s death, Abbie and I moved over 300 miles away from Norfolk, to Northumberland, which is an incredible place to heal.

And Grace still lives on. We are currently planning a celebration for her 21st birthday. She might not be here in body but we will always celebrate her life. She lives on in her artwork that is displayed on our walls, in the photos on the mantelpiece, in the shampoo that she used to use which I still smell to remind me of her, and in her sister – who grows more like her each day. And any time my legs are struggling during the climb up Scafell Pike, I’ll keep going – for Grace.

I’ll never stop talking about Grace and telling her story – and I want to do everything I can to help other people never have to go through what we’ve been through.

PAPYRUS is an amazing charity, who provide an incredible hotline. Sometimes, when you’re having scary thoughts, you just need to speak to someone removed from the situation – PAPYRUS can do that.

To anyone out there who needs help or is struggling, please don’t hesitate to pick up the phone to them.

I was in the hairdressers one Monday morning when I received a phone call from my oldest son Josef’s ex-girlfriend.

She told me she was worried about Jo – as he liked to be called – as he’d gone to visit some friends on Friday and nobody had been able to get in touch with him since. I’d also tried calling him over the weekend and hadn’t been able to get hold of him, but I assumed he was just off having a good time somewhere.

Two weeks later, the police would find my lovely son’s body in the woods and I would discover that he had taken his own life.

Jo was a bit ‘different’, I always say that there’s nobody else like him. He was very individual and a kind and caring person – the sort of person who would step in if anyone was being bullied or mistreated. He was also very talented, both musically and artistically. He would walk into a room and light it up.

But he had suffered with his mental health and depression for a lot of his life. He was a gentle, lovely person who had a lot of  horrible things going on in his head.

Josef was taken from us six years ago, in 2016. He was in his final year of university, studying fine art illustration. I knew he’d been struggling but he was speaking to me about it, and his friends were supporting him, which was all reassuring.

After I received the call from Jo’s ex-girlfriend that day, I tried not to panic and tell myself that, of course, everything would be ok. He sometimes went off grid a little, but he always turned up. I was sure he’d be with a friend somewhere, or back in Liverpool where he lived, or at Uni in Huddersfield.

This time, he wasn’t.

A two week search for Jo ensued shortly after we were unable to locate him. Frustratingly, his university wasn’t able to give me any information on how long it had been since he’d attended classes, due to data protection. But shortly after I reported him missing, the police were involved.

How you can help PAPYRUS

Join us on our amazing Metro.co.uk Lifeline challenge and help raise funds for PAPYRUS Prevention of Young Suicide.

Just before midnight on Saturday 2 July, 2022, we’ll be heading off into the dark sky to climb England’s highest mountain, Scafell Pike in the Lake District, for an unforgettable fundraising adventure.

Although our journey will start at night, to reflect the vital work the charity does in helping families and young people find light during their darkest times, it will finish just in time for us to catch the sun rise across the stunning scenery.

Registration costs £39 and fundraisers have to pledge to raise a miminum of £325 for PAPYRUS.

Places will be limited, so to take part sign up here.

The search area was big – I was in Cumbria, Jo was at university in Huddersfield and lived in Liverpool, had his dad in London, and friends all over. He could have been anywhere.

We set up a social media campaign and the search went national. The overwhelming thing I remember about this period of time was just a constant feeling of hope. I just hoped and hoped he would turn up at someone’s house one day and apologise for worrying us all. While people around me started to think that something bad might have happened, I kept this hope alive. And I kept it alive for as long as I could.

But the hope was dashed when the police called me to tell me Jo’s body had been found, in a woods in Liverpool.

It’s hard to describe the feeling; just sheer and utter devastation. Before I had any time to process my feelings, I was told by the police that I needed to let any close friends and family know, before it ended up on the news or social media, given it had turned into a high profile search.

I had to tell my mum and then my younger son over the phone. I think we were all in a state of disbelief.

In the weeks and months following Jo’s death, my younger son tried to carry on as normal – it wasn’t until months and months later he really crashed. And it still affects him now. He’ll sometimes still ring me up and tell me that he’s having a hard time, and that he’s thinking about Jo. They had a good relationship and he’s felt every emotion from sadness to anger, feeling angry that his big brother left him.