I knew what to look for, but I missed the signs.

I went to an ovarian cancer awareness walk a decade before I was diagnosed with it at the age of 44. I took home pamphlets describing it as a “silent killer” because most people miss the symptoms, which include frequent urination, feeling full quickly, changes in bowel habits, bloating, fatigue, upset stomach, back pain, pain during sex, constipation and heavy periods.

Unfortunately, every one of these symptoms could be a sign of something else, so we are often misdiagnosed and don’t know we have ovarian cancer until it’s already advanced. It is incurable and often fatal.

For 10 years after the awareness walk, I didn’t notice any changes to my health that I thought were unusual. I continued getting Pap smears at the recommended intervals and began getting yearly mammograms at age 41, even though my primary care doctor advised against it. “There are too many false positives,” she said.

It was a dermatologist, not a gynecologist, who diagnosed me. I had a small growth, the size and color of a pencil eraser, in my navel. When the dermatologist removed it, he thought it was something harmless. The biopsy said otherwise.

The call came on April 1, 2020. That first day, all I could do was get my blood tested. At this point in the pandemic, we didn’t know if we could get COVID-19 from surfaces. I used my shirt sleeve to open doors, then woke up in the middle of the night wearing the same shirt and wondering whether there was coronavirus on my sleeve. 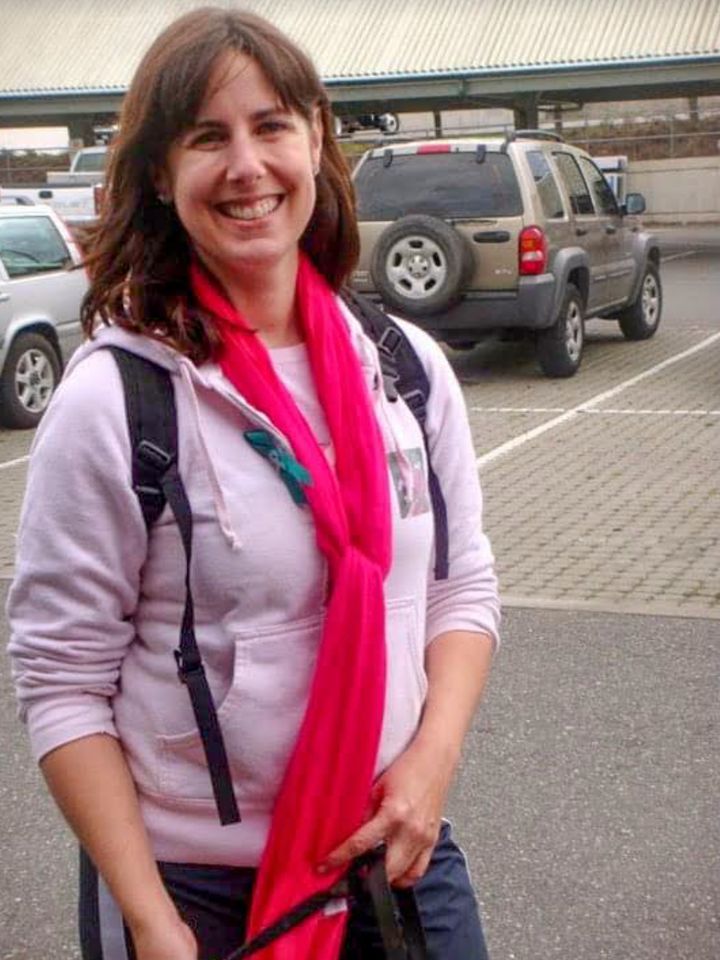 The blood test found elevated levels of cancer antigen 125, a tumor marker that is not an entirely reliable indicator of ovarian cancer. Too many false positives. Also false negatives. My CT scan a week later showed that each ovary had been overtaken by tumors the size of small citrus fruit, and I had a third tumor the size of a larger citrus fruit in the center of my abdomen. The cancer had spread up through my umbilicus and out my navel, which was, as far as I knew at the time, the only symptom I had.

There seem to be as many ways to find the cancer as there are people who have it. According to the American Cancer Society, that’s 1 in 78 people with ovaries, of all ages. One in 108 will die of it.

A Pap smear doesn’t detect ovarian cancer, and there’s no ovarian version of a mammogram. Among the people in my online support groups, some discovered their cancer while they were pregnant, or trying to figure out why they weren’t getting pregnant. Some had unusual bleeding, or another emergent event that landed them in a hospital.

Countless others sought medical help for the symptoms listed above, but were misdiagnosed with something like irritable bowel syndrome, heartburn, diverticulitis or menopause. Too many patients were sent home believing it was nothing, or they were making too big a deal out of it, or it was their fault because they were overweight.

We misdiagnose ourselves, avoiding trips to the emergency room for those same three reasons. I did. In hindsight, I did have excruciating back pain six months before I was diagnosed. I thought I’d strained my back lifting my 85-pound elderly dog. I learned to lift with my legs and it mostly went away. I can’t imagine a scenario where my efforts to alleviate lower back pain would have led me to ask about ovarian cancer.

More than a year after my diagnosis, after several months being cancer-free, I recalled intermittent sharp chest pains in recent years. My internet research at the time convinced me it was heartburn, most likely from overindulging in processed carbohydrates and chocolate. Waiting it out at home was preferable to sitting in an emergency room for hours, and I never thought to mention it to anyone. It only occurred to me that this could have been a sign of ovarian cancer after 13 months of racking my brain trying to think of symptoms I missed.

Had my belly button saved my life?

If my cancer hadn’t found its way out of my body through my navel, it probably would not have been discovered until after it disrupted other essential organs like my liver, kidneys or lungs. It could have been a death sentence.

When I met my gynecologic oncologist over videoconference, she told me, “Ovarian cancer isn’t curable, but it is treatable.”

My treatment began with three chemotherapy infusions, making my hair fall out, before we discovered that I had a rare subtype called low-grade serous ovarian cancer, which often does not respond to chemotherapy. My gynecologic oncologist said, “The chemotherapy didn’t work as well as we hoped.”

I had to clarify, “You mean it didn’t work at all.”

In June 2020, my surgeon removed my ovaries, fallopian tubes, uterus, omentum, cervix, and 10 inches of colon because (surprise!) one of the ovarian tumors had perforated my colon. She removed all the cancer she could see, and my blood work following surgery showed lowered levels of CA-125 as well as another tumor marker called human epididymis protein 4 (HE4). Follow-up CT scans have shown no evidence of residual disease.

A common thing for people to ask at this point is, “So you’re good now?”

Ovarian cancer is considered a chronic illness. I am likely to have a recurrence eventually. Even with the removal of all those organs, the cancer can come back elsewhere. But I don’t feel any closer to dying than I was a year ago. If it comes back, by the time it comes back, I hope ovarian cancer research will have led to treatment for all future expressions of my cancer. 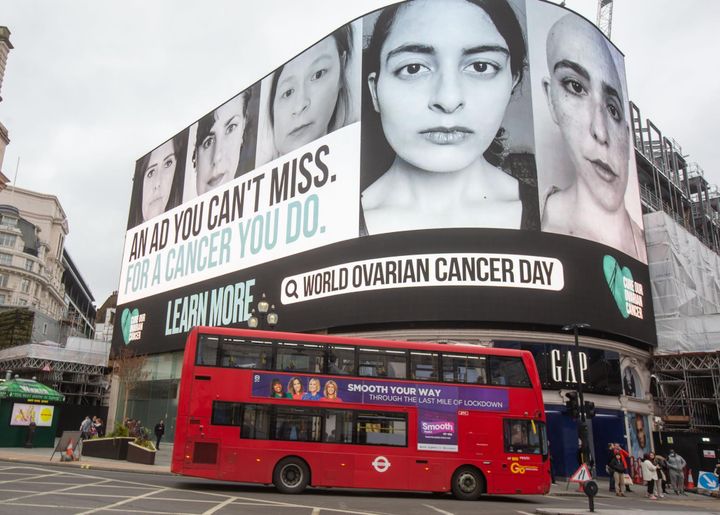 The ribbon for ovarian cancer is teal. I dyed my newborn cap of hair teal and painted my nails to match before a September follow-up with my medical oncologist. The nurse who took my vitals complimented the coordination. “Thanks,” I said. “Ovarian Cancer Awareness Month.”

She paused in her disinfecting of the pulse oximeter and gave me a second look. “Why didn’t we know that it’s Ovarian Cancer Awareness Month?”

Maybe for the same reason I didn’t realize I had ovarian cancer, even though I’d been to an awareness walk. Ovarian cancer is a sneaky bitch.

Since my diagnosis, when I tell my friends that a Pap smear cannot detect ovarian cancer, I also give them the rundown of the symptoms to watch for.

“I have all of those,” they usually say.

I asked my gynecologic oncologist what they should do. Should they demand a CA-125 blood test and abdominal ultrasound? No, she said. They should tell their doctors about their symptoms and ask, “Do you think it could have something to do with my ovaries?”

Then she told me that early screening does not improve ovarian cancer survival rates. That took me some time to wrap my head around. My understanding is that it doesn’t necessarily matter when we detect ovarian cancer if we don’t have a way to cure it.

Not only do we need the equivalent of a Pap smear for our ovaries, we also need more research to find a cure.

Kari Neumeyer is a writer and editor in the Pacific Northwest. When she’s not writing about cancer, she writes about dogs and salmon. She is working on a memoir about her ovarian cancer diagnosis and treatment. Her first memoir, “Bark and Lunge: Saving My Dogs from Training Mistakes,” was published in 2014. She has a master’s degree in journalism from Northwestern University’s Medill School.

Do you have a compelling personal story you’d like to see published on HuffPost? Find out what we’re looking for here and send us a pitch!