NBA star Chris Paul didn’t attend a historically Black college as a young man, but he has long been a vocal supporter of HBCUs. In an interview with CBS News, the 10-time NBA All-Star explained why he’s been a champion of HBCUs.

“My appreciation comes from the history,” Paul said Thursday. “For me, I was the only person in my family who didn’t attend an HBCU, and so as I got older, I just started to dig into a little bit more.”

“I just want to make sure everyone understands that HBCUs are not less than, they’re very capable and important to our history, to our culture, to everything,” Paul added.

The majority of HBCUs were founded after the Civil War to provide higher education for African Americans when most schools in the country prohibited them from attending. Today, many of the universities are facing funding challenges.

Despite record increases in enrollment and applications over the last few years for some schools, sustainability is still a concern. More than 70% of HBCU students have limited finances, according to the American Council On Education.

Paul, 35, wants to help alleviate the financial burden that comes with attending college. The Phoenix Suns star will serve as a judge to select 10 current or prospective HBCU students for a new scholarship. 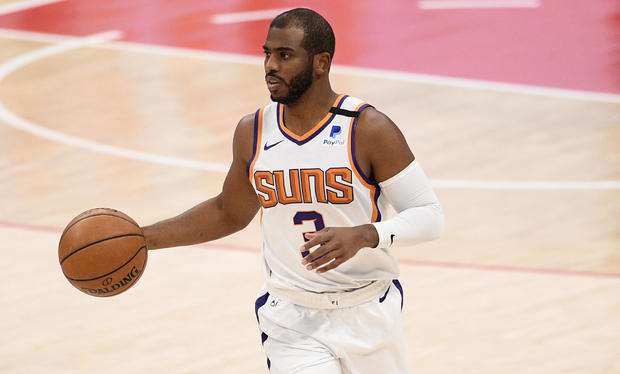 The scholarship is a partnership between Sour Patch Kids and the Thurgood Marshall College Fund. Sour Patch Kids said it will commit $1 million over five years to the Mischief for Change Scholarship.

“It’s an honor and a privilege to have been an active proponent of HBCUs and seeing firsthand the impact HBCUs have on students and our community,” said Paul, who encouraged students to apply.

Last year, a handful of top-ranked players chose to attend HBCUs, including Makur Maker who was lauded for his decision to attend Howard University. The colleges have long struggled to recruit young stars.

Paul said he was “excited” to see Maker go to Howard and highlighted Mikey Williams, who many consider the nation’s best high school player. Williams is reportedly considering HBCU schools to play basketball.

“I think it’s only the beginning… I think these kids will start to realize their influence and their power,” Paul said. “If a few of these kids team up and come to HBCUs, the camera crews, everything, everyone will come.”

Paul recently lent his voice for a CBS Sports documentary that chronicles Earl “The Pearl” Monroe and his effort to lead Winston-Salem State University to a national championship in 1967, the first of any HBCU in any sport.

Paul said working on the film was personal for him because both of his parents attended Winston-Salem State, and because he enrolled as a student last year.

“I remember when I first got to see the script and everything, I sent it right to my dad,” Paul said. “I’m a product of my environment. I grew up in a house that loved sports, my dad loves sports. For it to be about Winston-Salem State, which is where I had AAU practice as a kid growing up. Everything about Winston-Salem means a lot to me.”