Letterkenny is not an easy show to describe. That it is a comedy is undeniable. That it is Canadian is overwhelmingly obvious. Beyond those broad categories, finding a box to fit it in becomes increasingly difficult. Which is not by any means a bad thing: the ability of this bizarrely low-key slice of rural life to defy classification may be its greatest strength. 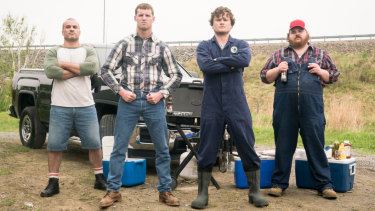 The bald facts: Letterkenny is a small country town somewhere in Canada. Within the little burg live three distinct tribes, in a state of cold war with each other. These are the hicks, salt-of-the-earth, denim-clad farm boys; the skids, jittery weasely goths; and the intriguingly-named hockey players, dim-witted, macho surfie types.

The factions make little sense, and their battles are mainly of the verbal type: eccentric machine-gun zingers pinballing back and forth, invested with the hostility of a deep history we only occasionally glimpse. The central figures of the show are hick besties Wayne and Daryl, who battle stoically against the skids, the hockey players and the myriad challenges of life, love and social status in the middle of nowhere, with the assistance of hulking pal Dan and Wayne's snarky sister Katy.

Watching Letterkenny is something like undertaking an anthropological study: whether the society depicted is drawn from the reality of life in small-town Canada, or a surrealistic invention of the creators, it's impossible to tell from this vantage point; but either way, it's an alien world whose rhythms, customs and taboos are impenetrable to outsiders but understood perfectly by all involved.

The denizens of Letterkenny speak in an idiosyncratic dialect, deadpan and rapid-fire and what might be called "quirky" if the commitment to the bit were less total. As it is, the peculiarities accumulate to form a sort of dirt-floored fantasy world, one in which everything looks familiar – from the pick-ups to the Christian youth group – but feels like it just materialised from a different dimension.

It's important to note that Letterkenny is, in fact, very, very funny, even if you don't always know why. There are hints of Napoleon Dynamite, touches of early Kevin Smith, and even the occasional faint echo of John Waters, but it's very much its own curious and understated beast. Trusting the audience to get on board with the vibe, the jokes are never overplayed, the characters never winking to make sure we're in on it. Not everyone's going to understand this, Letterkenny says, and that's OK: we don't understand everyone either.

One could say that the show, developed from a series of YouTube shorts by co-creators Jacob Tierney and Jared Keeso – the latter of whom stars as the Eastwood-esque hero Wayne – is testament to how the expanding landscape of comedy has allowed more niche creations to find prominence.

It's difficult to imagine a show like this gaining a foothold in the old world of laugh tracks and rimshots, although it should be noted that for all we know, Canadian comedy has always been this way and we just never looked before. Hopefully Letterkenny's arrival on Australian screens will demonstrate that here, too, there is an audience for the weird, the unexpected, and the uncategorisable.

In an odd little Canadian town filled with no-hopers and lunatics lies the opportunity to broaden our own horizons.

The One Movie To Watch Before It Leaves Netflix In March

Woman Who Was Bullied as a Child Launches #HatNotHate Campaign to Spread Awareness, End Bullying