A stockpile of vaccines here, an outer suburban railway line there and ugg boots under every new home office desk.

That was the secret to the economy in the June quarter, but it won’t be enough to stave off a near-record drop in activity we’re enduring right now. 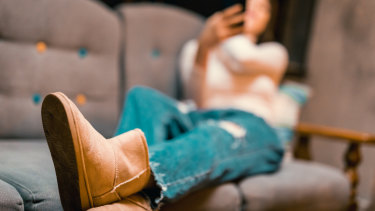 The June quarter national accounts continued what has been 18 months of official figures that have turned even the smartest of spreadsheet users into babbling messes.

Officially, the economy expanded by 0.7 per cent through the final three months of the 2020-21 financial year. As a quarter, it’s about the mid-point of every quarterly result since the start of the century.

But that 0.7 per cent meant annual growth jumped from 1.3 per cent to 9.4 per cent. Just over a year ago, the country suffered its biggest quarterly fall since 1932, and now it’s running at a level not seen since the days of World War II.

The June quarter was propped up by a few key developments.

Public inventories soared by about 460 per cent to an all-time high of $2.1 billion. According to Westpac’s Andrew Hanlan, much of that was probably vaccine stockpiles yet to be pumped into the arms of Australians.

There was also an increase of more than 600 per cent in the value of farm inventories. Combined, they added about 0.5 percentage points to the overall quarterly result.

Even before the pandemic, the Reserve Bank was urging all levels of government to boost their spending on infrastructure. To their credit, federal, state and local governments responded.

Much has gone into rail projects, for instance. In WA, public capital spending reached a nine-year high in part due to a near-13 per cent jump in expenditure related to its Metronet rail works. On the other side of the continent, spending on rail in NSW jumped by almost 9 per cent.

But the pandemic has forced all levels of government to spend up on their health systems. Across every state and territory, more money was pumped into hospitals to deal with increased workloads.

The other key element was the nation’s households that increased spending by another $3 billion through the quarter.

Just when you thought you couldn’t add to your ugg boot or tracksuit wardrobe, Australians did. Spending on clothes and shoes is now 10 per cent higher than it was pre-pandemic.

And we’re wearing those slippers and comfy pants behind even more desks and computer screens in our home offices. Expenditure on home furnishings is 11.3 per cent higher than before coronavirus.

All of this, of course, occurred before the current series of lockdowns that have almost 50 per cent of Australians trapped in their lounge rooms, free to compare Russell Crowe’s version of Robin Hood to that of Errol Flynn.

After the best annual result in history, the economy is going to take another huge dip. With some luck, we should get them another boost through the final three months as lockdowns come to an end.

But I wouldn’t bet your best pair of uggs on that.