Victorian Premier Daniel Andrews has hit back at Prime Minister Scott Morrison for saying the decision to scrap isolation requirements for close contacts of COVID-19 cases rests with the states, rather than the federal government.

Speaking at a press conference for the first time since coming out of COVID-19 isolation on Tuesday, Mr Andrews accused the prime minister of falsely declaring the onus of isolation rule changes was a matter for premiers. 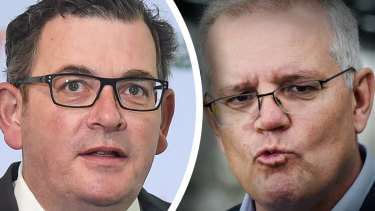 “I saw some comments from the Prime Minister about, ‘these are all matters for the states’. It’s somebody else’s job, apparently … no,” Mr Andrews said.

Calls for close contact isolation rules in Victoria to be overhauled have been heating up in recent weeks. Opposition leader Matthew Guy said it was time they were scrapped last week, and Mr Morrison on Monday said he was looking forward to them being removed.

“They came back as a group of experts, and they said, ‘Not at this time.’

“Hopefully that time comes though, and we’re able to make those changes.”

Mr Andrews said the committee’s decision made sense, given COVID-19’s current surge was expected to “peak in the next few weeks”.

“I see some people … [saying], ‘There was no infection in my household, so that should be the rule for every household,’” he said.

“Well, in my house – despite our best efforts – that’s not what happened. So I think it’s a bit dangerous to look at just one household; it’s always best to look at the views of experts.”

Mr Andrews said Mr Morrison disliked current health advice concerning isolation requirements. He said if there was a quarrel between Mr Morrison and Chief Medical Officer Professor Paul Kelly, “well, I respectfully suggest that he sort that out”.

“I’m in the business of following the advice of experts. If others have got a problem with that – the [Prime Minister] for instance, then he can take that up with Professor [Paul] Kelly,” he said.

The Australian Health Protection Principal Committee on Friday handed its advice to national cabinet stating isolation and testing rules could be eased after the current wave of infections from the Omicron BA.2 subvariant had peaked, expected by mid-April “in some jurisdictions”.

Hospitalisations increased 25 per cent nationally in the 12 days to March 23 when cases jumped 77 per cent to hit 61,689, the committee’s report said, although the number of patients in ICU fell six per cent.