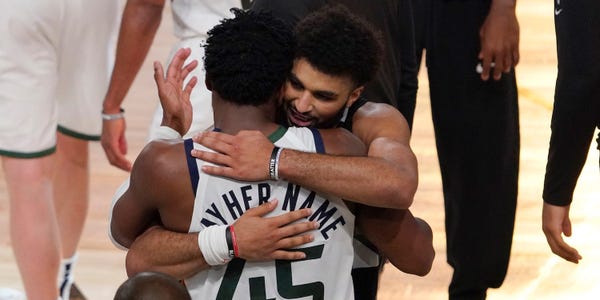 Denver Nuggets guard Jamal Murray showed some good sportsmanship after the Nuggets squeezed by the Utah Jazz to advance in the NBA playoffs with a wild, 80-78 Game 7 win.

After Jazz guard Mike Conley's buzzer-beating three-point attempt rimmed out to seal the Nuggets' win, escaping after a wild final sequence, Murray ran over to Utah's All-Star guard Donovan Mitchell and consoled him.

Mitchell had carried the Jazz to the finish line, but couldn't pull them over it. With the game on the line, Mitchell drove to the basket and turned the ball over. The Nuggets missed a layup on the other end, and the Jazz got the rebound, hurried up the floor with no timeouts, and gave it to Conley, who pulled up from 26 feet out.

When Conley's shot missed, Mitchell collapsed to the floor.

Murray ran over, picked Mitchell up, and gave him a hug.

"It was an amazing duel," Murray said after the game.

He added: "I pay my respects to him. It was a great battle, and it's not gonna be the only one, either. We expect to see each other a lot in the future. He raised my play of the game, I raised his … It was a lot of fun."

The Jazz appeared teary-eyed as they left the floor.

In his postgame interview, Mitchell said the loss would only fuel him next season, declaring "This is just the beginning."

The Nuggets will play the LA Clippers in the second round.