More than one million Australians are now unemployed with the official jobless measure breaking through the seven-figure mark for the first time on record despite an extra 115,000 jobs added in July.

Australian Bureau of Statistics data released on Thursday morning shows 1.01 million people were out of work in July, pushing the unemployment rate to 7.5 per cent. The jobless rate is the highest since November 1998. 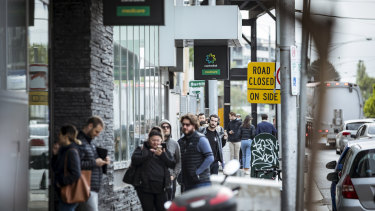 More than a million Australians are out of work.Credit:Chris Hopkins

The survey was conducted within the first two weeks of July, before the stage four lockdown in Melbourne. The new restrictions have seen official predictions of joblessness revised upwards to 10 per cent or higher by the end of the year.

Markets had expected Thursdays figures to show anywhere between the loss of 120,000 jobs and the creation of 150,000.

The underemployment rate fell to 11.2 per cent from 11.7 per cent in the month to July, but was up 2.4 percentage points above the March rate. The participation rate increased to 64.7 per cent.

While total employment rose to almost 12.5 million, it is still 500,000 down on the pre-virus peak of 13 million reached in February.

ABS head of labour statistics Bjorn Jarvis said the number of unemployed people increased by 16,000 over the month.

"For the first time there were more than one million people out of work, available to work and actively looking for work," Mr Jarvis said.

"The July figures indicate that employment had recovered by 343,000 people and hours worked had also recovered 5.5 per cent since May," he said. The jump in employment was driven by a rise of 71,200 part-time workers compared to 43,500 full-time employees.

"Employment remained over half a million people lower than seen in March, while hours worked remained 5.5 per cent lower. "

There were wild swings in the states and territories, with unemployment jumping to 7.2 per cent in NSW from 6.9 per cent and to 8.8 per cent in Queensland from 7.7 per cent.