The morning after former prime minister Bob Hawke died, a man knocked at the door of his Sydney home. He had flowers and a letter in hand, which in part read: “You have given us a beautiful life, thank you Bob, we love you.” A former Chinese student living in Australia, the man was one of more than 42,000 people eventually granted asylum when Mr Hawke, during an emotional speech, offered them protection after the 1989 Tiananmen Square massacre in Beijing.

Years after he made the offer, it was revealed that Mr Hawke had not consulted his cabinet on the decision, and when he finished his speech was told, “You cannot do that, Prime Minister”, to which he responded: “I just did. It is done.” 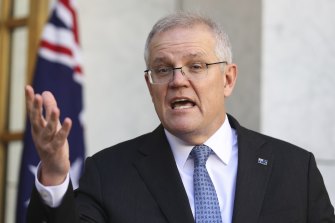 Contrast that with this week’s message from Prime Minister Scott Morrison. The overthrow of Ashraf Ghani’s government in Afghanistan has been a shocking reality check for anyone who thought Western intervention could sustain a long-term viable democratic government able to maintain security in its own land.

The Taliban’s rapid takeover has turned the West’s withdrawal into a chaotic and dangerous operation. The Australian government estimates there are about 200 Australian citizens, permanent residents and families still in Afghanistan, as well as 300 to 400 Afghans with a connection to Australia.

It is a dangerous place. The Taliban have a history of adhering to an extremist ideology and using barbaric means to enforce their authority. While the newly installed Taliban claim they only want peace for the nation, there are many Afghans unwilling to give them a second chance and who desperately want to leave the country.

In response, this week Mr Morrison announced he would offer at least 3000 Afghan refugees the opportunity to move to Australia during the next 10 months, a number that would “increase further” over the year. Canada and the UK are both offering 20,000 places, though spread over a number of years.

Australia’s offer came with no increase in the cap on humanitarian visas to be offered, and provisos were attached that were a stark reminder of rhetoric that has long been a staple of this government. The Prime Minister said Australia would only be resettling Afghans who came through the “official humanitarian program”, in a not-so-subtle warning to those who may wish to come via boats. As if to emphasise the point, he went on to say: “We will not be allowing people to enter Australia illegally, even at this time. Our policy has not changed.”

And while the 4200 Afghans living in Australia on temporary visas were given assurances they would not be sent back any time soon, Mr Morrison and his Immigration Minister have offered no path to a long-term future in Australia.

You don’t even have to go as far back as Mr Hawke to remember a more generous approach. While it took some political pressure, in 2015 then-prime minister Tony Abbott, one of the chief advocates of the turn-back-the-boats policy, agreed to accept 12,000 refugees fleeing Syria during that country’s civil war.

Mr Hawke and Mr Abbott followed in the footsteps of others. Going back to the Vietnam War, and even further back to World War II, Australia has accepted hundreds of thousands of people fleeing war-ravaged countries. In many respects, this open-door policy has been the bedrock of Australia’s transformation into a multicultural society.

While it has not come without debate, there can be little question of the long-term economic and cultural benefits to Australia that its generous humanitarian program has provided.

We are a better nation for our history of helping those in need. Now is not the time to lose sight of that.