Meadow Walker, the daughter of the late Paul Walker, is speaking out about a secret health battle.

On Thursday, the model took to Instagram to reveal that she previously had a tumor removed, saying she’s now feeling “blessed & grateful.” Meadow posted a photo of herself from two years ago, with the image appearing to have been taken at a medical center.

The photo showed Meadow giving a thumbs up to the camera. In the shot, the 22-year-old can be seen wearing a blue medical hair cover, and with fiducials markers on her forehead and temple. According to Johns Hopkins, fiducials are “small stickers that look like white doughnuts” that are put in place before an MRI or CT scan to make a “3-D map” of the head, with the scan then providing a surgeon with a “series of reference points,” which “integrate navigation” during brain surgery.

Meadow’s fans and celebrity pals alike took to the comments section to react to the post. Among those who commented was her godfather, Vin Diesel, who sent a praying hands emoji.

Meadow’s post comes just a few weeks after she revealed on Instagram that she got married to her fiancé Louis Thornton-Allan. 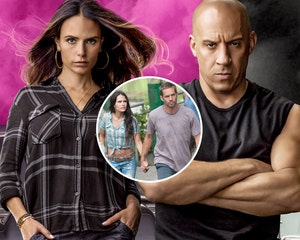 Meadow announced the exciting news of her nuptials on October 22, sharing several posts from the beachside ceremony, including a sweet black-and-white video that featured a montage of clips from the wedding. “we’re married !!!!” Meadow captioned the post at the time.

According to PEOPLE, the ceremony took place in the Dominican Republic earlier that month.

As shown in Meadow’s Instagram posts, among those in attendance at the wedding were her late father’s “Fast & Furious” co-stars Jordana Brewster and Vin Diesel, who walked Meadow down the aisle.

Paul Walker passed away at the age of 40 following a car accident in November 2013. Meadow was 13 at the time.