Never too old for a telling off! People visiting their parents’ houses for Christmas share the things they’ve been scolded for – including eating too much cheese, flushing the loo ‘too hard’ and boiling the kettle ‘wrong’

Stepping through the front door of your parents home at Christmas – however old you are – renders you a teenager once more it seems, as Twitter users have been testifying over the last 48 hours.

Adults – many in middle age – returning home to their family homes have been sharing how they’ve been told off for everything from not loading the dishwasher correctly, to swearing too much and even ‘encouraging the cat’.

Stories of Christmas reprimands poured forth after one Twitter user, @j_o_n_a_than, shared what he’d been told off for since staying with his parents this yuletide.

The list included ‘flushing the toilet too hard’, turning taps off too quickly and eating the ‘Christmas Day cheese’.

The latter sparked a video clip response that showed 21-year-old Luke Martingell being told off by his mum on Christmas Eve for eating the Camembert that she had saved for December 25th. 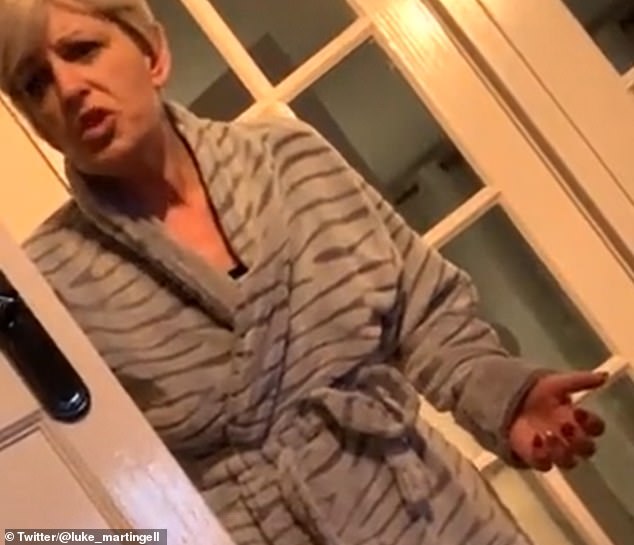 Woe betide the child who eats the Christmas Camembert: 21-year-old Luke Martingell has seen this clip of his mum telling him off on Christmas Eve for eating the food being saved for Christmas Day win more than 40,000 views 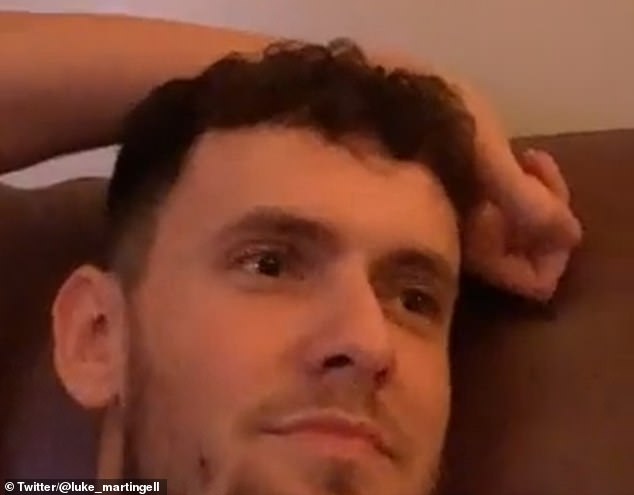 Clearly livid, his mother lets rip at her son for eating Camembert meant for Christmas Day 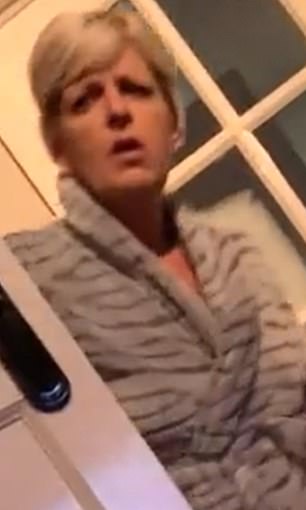 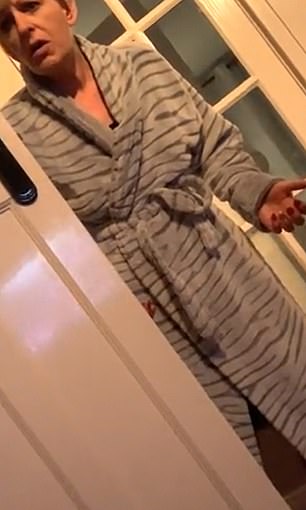 Wearing her dressing gown, Luke’s mum opens the door to unleash her tirade at her cheese-eating son. She tells him: ‘It’s f****** food for Christmas Day.’ 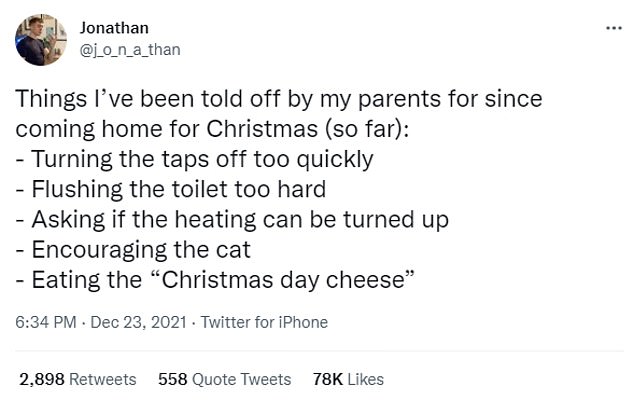 Apparently furious, Martingell’s mum, dressed in a grey dressing gown, is seen on camera saying: ‘What have you done with the Christmas cheese?’

Her son replies: ‘I had Camembert’ to which his mum, now even more livid, responds: ‘It’s f****** food for Christmas Day.’

The clip, which has had nearly 40,000 views since it was posted on Christmas Eve sparked a slew of similar responses from people who could relate.

@NicolaIngram30 wrote: ‘I’ve been told off for leaving a mug on the floor for 5 minutes, talking to the TV, swearing, leaving doors open.’

@mrsromaine added: ‘Having to immediately open the window and squeegee the shower after you finish really takes the joy out of a nice hot shower. So I don’t stay long enough to need one.’ 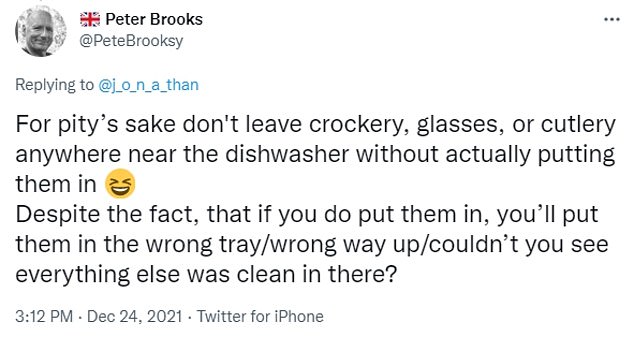 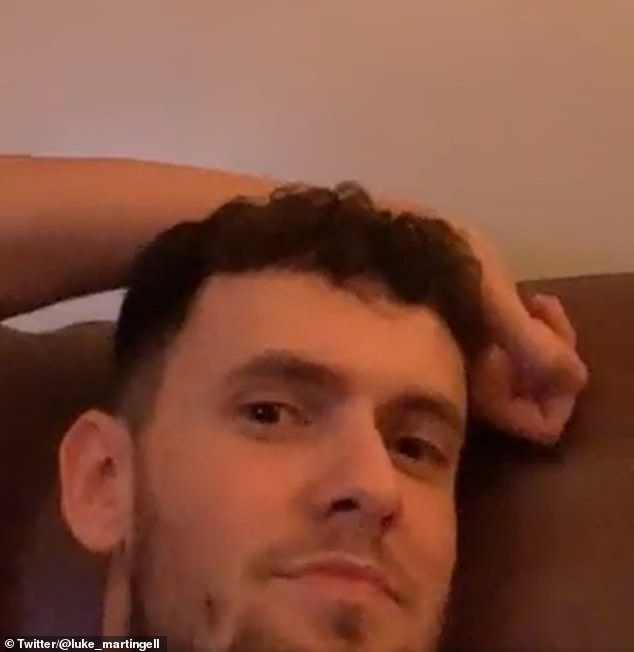 @MKcol wrote: ‘I have been there, every single time I visit mum.’

@ReallyNineLives penned: ‘How do you flush a toilet too hard? Or turn taps off too fast? I swear parents just make s*** up to complain about sometimes. I’d definitely encourage the cat more though.’

@JulianJohnPhot1 shared: ‘In my parents house, there are things you can eat, things you can’t eat and things that can only be eaten at certain times, unfortunately they are not labeled so quite often we get told off for eating things and for not eating things, it’s like Russian roulette with snacks.’

@PeteBrooksy added: ‘For pity’s sake don’t leave crockery, glasses, or cutlery anywhere near the dishwasher without actually putting them in. Despite the fact, that if you do put them in, you’ll put them in the wrong tray/wrong way up/couldn’t you see everything else was clean in there?’ 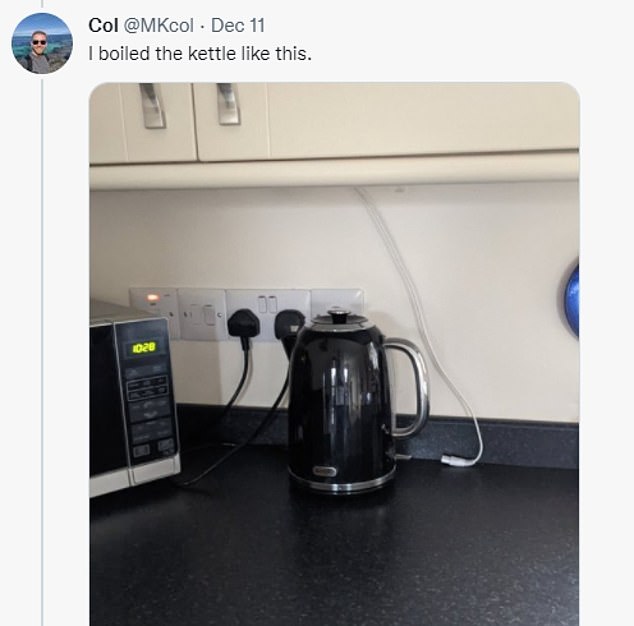 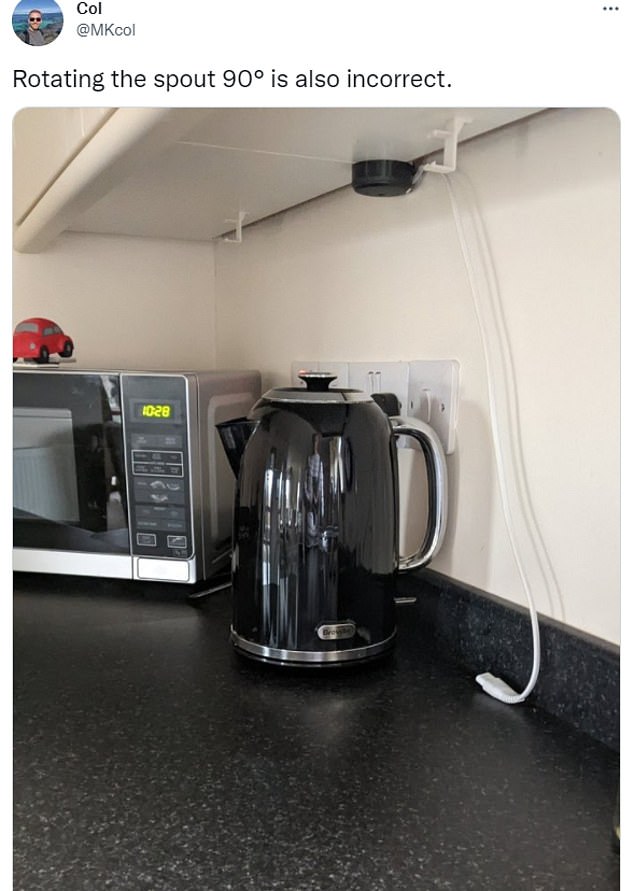 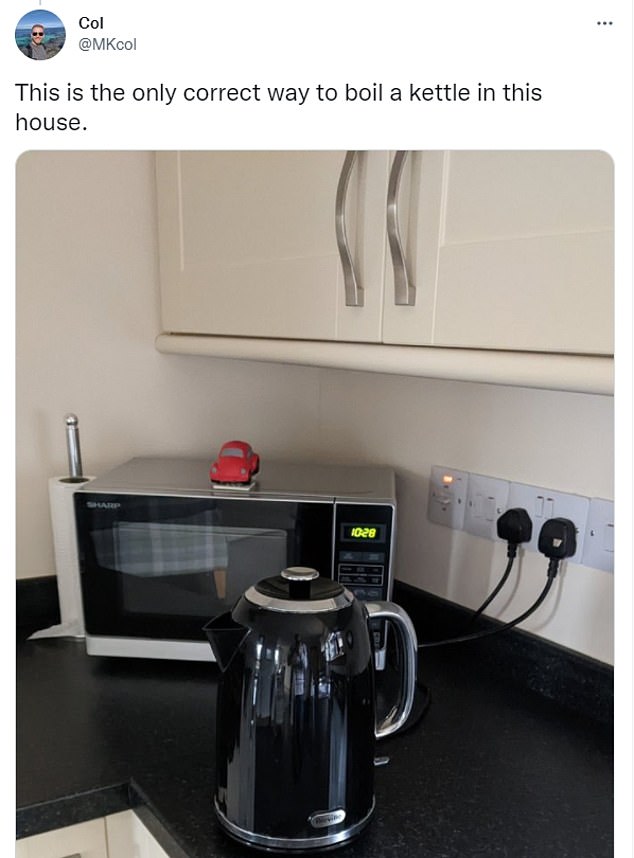 Running the kettle gauntlet…one grown-up child, @MKCol on Twitter, shared the way his mum likes the kettle to be boiled

– Dropping a piece of broccoli on the floor

– Putting flour in a bowl and not a pot.’ 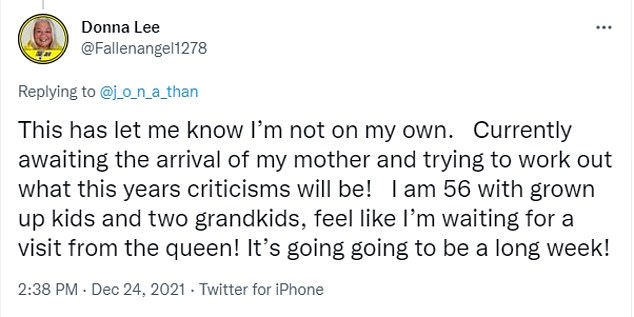 @Fallenangel1278 felt the same, saying: ‘This has let me know I’m not on my own. Currently awaiting the arrival of my mother and trying to work out what this years criticisms will be! I am 56 with grown up kids and two grandkids, feel like I’m waiting for a visit from the queen! It’s going going to be a long week!’

One mum joined in the thread, saying:  You’ve not been to my house. Thermostat set to 16 unless the grandchildren turn blue, then I allow 17. What do you think blankets were invented for?’