People with O negative blood are being urged to donate over the next fortnight, as centres report as many as half of all appointments are being missed due to coronavirus isolation requirements.

There is just 1.5 days’ supply of what is known as the “universal blood type” nationally, according to the Australian Red Cross’ Lifeblood service. The supply of all other blood types is also low, at 1.9 days. 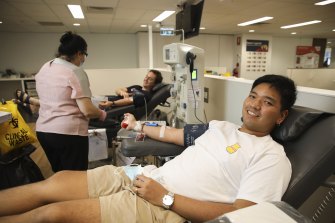 Red blood cells can be stored for up to 42 days after donation.

O negative is considered to be the most valuable donation as its red blood cells can be received by anyone, regardless of their individual blood type. Its supply is necessary for emergencies, including treatment in ambulances and rescue helicopters, where there is not enough time to determine the recipient’s blood type through a test.

Cancelled appointments due to isolation rules have particularly affected NSW supplies, with only 1.5 days worth of all blood types in the state.

With the Easter and Anzac long weekends approaching, Lifeblood’s director of donor services Cath Stone said it could not afford to see the usual drop-off in donations on a public holiday weekend, when the number of road accidents and emergency presentations mean higher demand for blood.

“We’re still seeing one in two appointments being cancelled or not attended on any given day,” she said.

The shortage has prompted Lifeblood to open 40 of its services on Good Friday for the first time.

Stone stressed that all blood types were needed, noting new donors may not know they are O negative. Fewer than 4 per cent of Australians donate blood.

“If you don’t know your blood type, donating is an excellent way to find out,” she said.

Although the pandemic has driven the need for more donors, other factors have seen Australia’s blood supply of O negative drop in recent years.

A Lifeblood analysis of data from 1.3 million hospital patients and more than half a million donors published last month found the proportion of Australians with O negative blood had dropped to 6.5 per cent. Donor data estimated the proportion was 9 per cent during the 1990s.

The shift has been attributed to immigration patterns – in recent years, the proportion of Australians with B and AB positive blood, the most common types in India and China, has gone up – but O negative blood continues to make up about 16 per cent of hospital orders due to its emergency use.

Since 2013, the National Blood Authority, the statutory agency which manages Australia’s blood supply, has focused on reducing wastage of donations due to expiry through better cataloguing processes. About 10,200 red blood cell donations were discarded in 2020-21 at a cost of $3.9 million, an eighth of the wastage in 2014-15.

“[Reducing] wastage is not driven by shortages from donations, rather it is good stewardship of a precious resource,” a spokesperson for the authority said, noting “a certain level” of wastage was to be expected, particularly with fresh blood products with short expiry date.

Lifeblood has asked the Therapeutic Goods Administration to lift a ban on donors who lived in Britain during the mad cow epidemic, potentially allowing thousands more to donate.

In a statement on Monday, the regulator said a delegate was “finalising their consideration of this matter and a decision is expected to be released shortly”.

Mitch Bryce, a group account manager for Lifeblood’s services across Canberra and southern NSW, experienced the need for O negative firsthand during Easter three years ago, when he accidentally ripped out surgical stitches while driving from Canberra to Geelong.

“I’d taken an ibuprofen because I couldn’t drive on the pain medication I had been using, the trouble was that prevented the blood from clotting,” he said. “I lost two and a half litres of blood.”

He was airlifted to hospital and received O negative transfusions.

Bryce agreed centres were currently being plagued by cancellations.

“Most days you go to work and you see you have X number of people coming in. But then two hours in you refresh that list and it has dropped in half,” he said.

The 31-year-old decided to start donating after hearing about decreased supply during the pandemic. “It’s not too bad – I’m OK with needles – and it feels good to help,” he said.

Most Viewed in National