For months, Philip Lowe and the Reserve Bank have been kicked around by politicians like a football in the middle of the MCG.

On Friday, the RBA governor returned fire with some very pointed kicks to the shins of the political class. 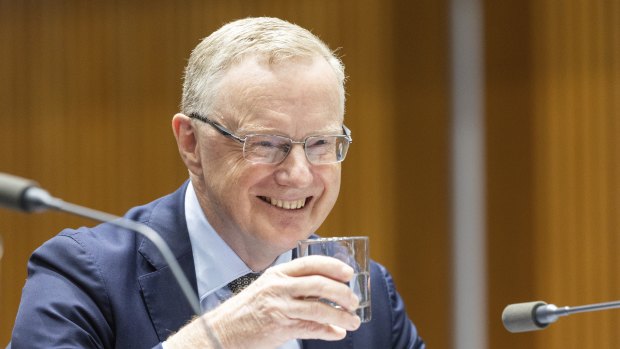 RBA governor Philip Lowe, under attack from MPs for months, used his time in a parliamentary committee to suggest economic reforms that governments need to consider.Credit:Alex Ellinghausen

The bank’s day job is monetary policy, using it to keep inflation between 2 and 3 per cent while aiming for full employment and securing the “economic prosperity and welfare of the people of Australia”.

Plenty of politicians reckon the bank, and Lowe, have got it wrong. Some have called for his head on a spike while both Labor and the Coalition went to the election promising the first independent review of the RBA since the early 1980s.

Facing the latest House of Representatives economics committee, where there were plenty of criticisms dressed up as questions, Lowe took the opportunity to wade into the very non-RBA world of fiscal policy.

He noted that it was more than passing strange that despite the highest terms of trade on record, unemployment at a 48-year low and a record number of people in work (and paying tax), the federal budget was forecast to remain in deficit.

Declaring the state of the budget a “significant issue”, he said the community – rightly – wanted high-quality services and infrastructure. The problem was that governments had been unwilling to confront the ways to pay for them.

Lowe pointed out that governments would soon have to either increase taxes, cut services or undertake some serious structural reform so the economy was larger and generated more revenue.

“Each of those are very difficult. Taxes, cutting back and structural reform. We have to do one of those three things, maybe all three of them,” he said.

You could hear the collective gulp from those assembled or listening in their parliamentary offices. Here was the RBA boss offering some sharp opinions about the fiscal elephant in the room.

But he didn’t just stop with a diagnosis. Lowe offered a timeline on when to start dealing with the issues facing the country.

“I would hope during this term of parliament that you could start addressing probably each of those three things to pay for the services that our community want,” he said.

And before MPs could move on to more RBA whacking, Lowe (thanks to a question from teal independent Allegra Spender) offered suggestions on what needed to be tackled.

The Productivity Commission’s Shifting the Dial report provided a welter of options, most of which have yet to be acted upon.

The tax system, from how it affected land use to consumption to savings, was crying out for change.

“Anyone who looks at [it] doesn’t say that’s the optimal system. In fact, they say we’re a long way from optimal on most of those areas,” he offered.

How we chose and funded our infrastructure, the way we trained workers, our education system, the blizzard of regulatory red tape. All needed reform.

In his central banker way, Lowe noted problems in the regulation of the energy system. “[We] probably haven’t nailed that,” he said deadpan.

Lowe went into the hearing on a hiding to nothing. Despite his protests, he was the one late last year saying interest rates were likely to stay steady until 2024 even as financial markets and some economists were warning inflation pressures were building.

That was before Vladimir Putin’s war and China’s COVID-19 lockdown and US President Joe Biden’s inflation.

It was under his guidance the RBA had interest rates too high before the start of the pandemic, which cost hundreds of thousands of Australians the chance of a job.

And pressed on Friday by outer-suburban MPs representing mortgagors who are feeling real pain due to the RBA’s five rate rises in as many months, the best he could offer was a variation of “this is going to hurt me more than it will hurt you”.

Lowe and the RBA face a real test as they fine-tune interest rate settings to ensure the economy marches on. But the governor made clear that the nation’s governments also have to carry some of the load.