In an extract from Dancing Under The Southern Skies, dance writer Valerie Lawson unpacks the British cultural invasion of 1947-49.

‘‘Why are you, the greatest actor in the world, taking a touring company to Australia of all places?’
— Samuel Goldwyn’s question to Sir Laurence Olivier, 1947 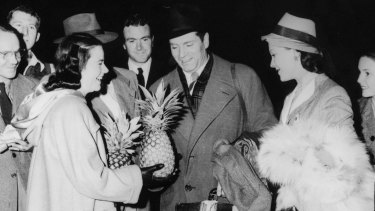 Sir Laurence Olivier and Vivien Leigh get a prickly greeting at Archerfield airport, Queensland, in 1948.Credit: State Library of Queensland. From Dancing Under The Southern Skies.

The war hadn’t ended when the cultural battle began. The British Council was keeping a sharp eye on Australia and its friendly new relationship with the United States. From the council’s point of view, this had to be stopped. It was disturbing that America was making such an impact on Australia, seducing the nation with its literature, music and, most of all, Hollywood movies. In confidential letters, the hierarchy of the British Council tut-tutted as they wrote to one another to and from London, setting out a plan of attack and recruiting like-minded people, all in the cause of keeping Australians close to the British way of life.

The campaign began in May 1944 with a letter from a British Council representative in London to the British High Commissioner in Canberra: ‘‘We have recently been somewhat disturbed by cuttings from The Times in regard to Australia which show that the Americans are making great strides there over books, that there is a feeling abroad that British documentary films are not getting proper showing there, and that even in music America is making considerably greater efforts than we are.’’

Two months later, a council representative in Jerusalem outlined a softly, softly strategy in a letter to Arthur John Stanley White (always addressed as A.J.S. White), the British Council’s Secretary-General in London: ‘‘The council’s first approaches in Australia should be tactful. Any suggestion that the council regarded Australia as a somewhat uneducated nephew in need of enlightenment would naturally be unfortunate.’’

Intelligent, cultured Australians however were conscious of their country’s shortcomings and backwardness and hoped that more could be done to increase the cultural traffic from England. The intelligentsia were ‘‘interested in the affairs of the mind and anxious to maintain intellectual and artistic links with England. They realise how much they lose because of the 11,000 miles that separate them from England and deplore the paucity of their intellectual and cultural resources … Not very improbably, they doubt whether its level will be raised by closer association with America … Australia gets very little good drama … this is an obvious field for the council and also ballet’’.

In 1945, the council began to recruit a network of Australians who would back the cultural campaign. Gradually it co-opted professors, media proprietors, editors and art gallery directors, among them Keith Murdoch, Warwick Fairfax, Charles Moses, general manager of the Australian Broadcasting Commission, and Roy Curthoys, the Australian correspondent to The Times who was based in the offices of The Age in Melbourne.

The campaign started in earnest in January 1947, when Charles Wilmot arrived in Sydney as the first Australian representative of the British Council. Wilmot, whose brother John was the British Minister for Supply, explained to the press the role of the council. Its purpose, he said, was to inform the ‘‘rest of the world’’ about Britain’s cultural and educational achievements.

Within two years, Australia was flooded with British propaganda and cultural touring groups from Britain. The first to arrive was the Boyd Neel Orchestra, a string orchestra group of 18 who toured throughout Australia from April to June. Australian press reports requoted a line from The Times, labelling the orchestra as ‘‘ambassadors of British culture’’. Another English newspaper took a different view, with the Daily Express telling its readers that the British Council was impertinent in trying to ‘‘sell’’ Britain to Australia.

The council’s next propaganda tour began in September with the arrival of the Ballet Rambert, led by its founder and director, Marie Rambert, who flew to Australia before her dancers. In Melbourne she flew the flag for Britain when she addressed 30 journalists gathered at the Oriental Hotel. She was, they thought, vivacious, delightful and bubbling with vitality. Rambert, who was born in Poland, told the press pack she was born in Russia, although her only connection with Russia was her years in Paris when she worked with Diaghilev’s Ballets Russes. At the outbreak of World War I, she moved to London where she married the English playwright Ashley Dukes. 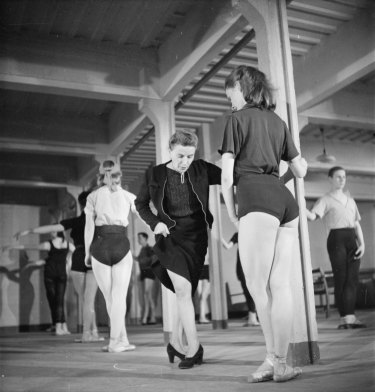 Marie Rambert teaching a class in 1943. Credit:From Dancing Under The Southern Skies

At her Melbourne press conference, Rambert played up her allegiance to Britain, explaining the way she became ‘‘a true Britisher on my wedding day when, as soon as my marriage vows were taken, I said ‘God save the King’’’. As she spoke to the reporters, she danced and twirled, demonstrating a few ballet steps. For the Argus photographer she struck a ballet pose, clasping the hands of Sir Benjamin Fuller, a director of the Carroll-Fuller Theatre Company that owned the theatres where the Rambert Ballet would perform. The Argus reporter was impressed by her ‘‘lovely slim legs’’ and the way ‘‘her big brown eyes sparkled with the joy of beautiful movement’’. 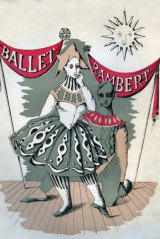 Cover of a Ballet Rambert in Australia program, with illustration by Loudon Sainthill. Credit:From Dancing Under The Southern Skies

The charming Rambert was not what she seemed. In the ballet studio she was as tough as [ballet director and choreographer] Edouard Borovansky, if not more so, sometimes sulking or stamping her feet while she taught class. Eccentric and completely unpredictable in public, she was famous for cartwheeling everywhere she could – on stage, backstage, at parties and receptions. Yet no one ever doubted her stoicism, energy, determination and optimism, even in the face of dire financial circumstances.

Few people knew she was struggling with debts she had accumulated with her husband in London in the postwar years. She grasped the offer of a tour to Australia but wasn’t confident it would solve her problems. Before the tour, her husband asked the Arts Council of Great Britain for an advance on the Australasian tour, telling the council his wife was in extreme financial difficulty. It’s unlikely they obliged, as the Arts Council, formerly known as the Council for the Encouragement of Music and the Arts, ended its support of Rambert early in 1947.

The tour Down Under was an artistic success but an administrative muddle with no single person in total control. While the British Council initiated the tour, the tour management was shared by [theatrical entrepreneur] Benjamin Fuller and Dan O’Connor, a New Zealand entrepreneur and theatre manager known as ‘‘the man with the sack of gold’’. O’Connor was a Jack-of-all-trades who made some of his money during the war by inventing and selling rubber seals for can-lids used in bottling fruit.

After the war, O’Connor was the go-between for the British Council, doing deals and organising contracts. In the northern spring of 1947, he met Marie Rambert in London, offering her a contract for a six-month tour to Australia. By early June, most of the company dancers had signed contracts and were soon ready to travel to Australia through a convoluted route that took them by ship from London to Canada, then on a flight from Chicago to San Francisco, where they boarded the Matson liner, Marine Phoenix, arriving in Sydney on September 23. O’Connor made sure the press was at the wharf to greet the dancers. 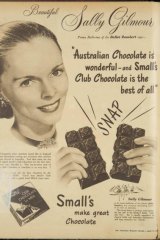 Sally Gilmour in a 1948 ad for Small’s Club Chocolate. Credit:From Dancing Under the Southern Skies

The reporters were entranced by Marie Rambert’s favourite dancer, the charismatic and beautiful Sally Gilmour, who found fame at the age of only 18 when she danced the titular role in Lady Into Fox, a ballet based on a gruesome novel about the strange metamorphosis of a woman who becomes a fox. Gilmour was compelling as the vixen, her hair twisted into the shape of pointy ears and a fox tail peeking from beneath the bustle of her Victorian-era dress.

Gilmour was equally impressive in classical ballet roles, especially Giselle. Her interpretation of the peasant girl was poignant, lyrical and poetic, and in the words of the critic, Cyril Beaumont, ‘‘unequalled by any English dancer of her generation’’. Gilmour was the poster girl of the Rambert Ballet tour and, just as Irina Baronova’s image was used for Australian press advertisements in 1938, Gilmour endorsed Small’s Club Chocolate as ‘‘the best of’’ all Australian chocolate.

During their first day in Sydney, the Rambert dancers had little time to explore the city. They were whisked to the Australia Hotel where Borovansky held a reception for the Rambert dancers, for his own dancers, for Fuller and the press. It was a courageous move on Boro’s part, considering his frustration with the English troupe’s tour to Australia. He may have felt bitter, but in his speech at the reception he showered Rambert with compliments. If it wasn’t for Rambert, he said, there would be no English ballet today. She was ‘‘the first person to say that the English could dance as well as the Russians’’.

Overnight the company travelled by train to Melbourne, where another cluster of reporters scribbled down details of the dancers’ dresses, hats and jewellery, the colour of their eyes and their hair, and their sea voyage adventures. The Age found the dancers exceptionally youthful and charming, while Rambert told the Argus, ‘‘I am glad to see them all looking so nice and slim. I was afraid they would have got so fat with all the good food on the ship. But they have not.’’