MILAN — Prada chief executive officer Patrizio Bertelli does not give up easily and he certainly isn’t disowning his dream of winning the America’s Cup.

Bertelli and plenty of Italians were cheering on as Luna Rossa Prada Pirelli in February won the Prada Cup in the waters off Auckland, New Zealand, sealing a 7-to-1 win over team Ineos U.K. Seven points were required to win the Challenger Selection Series and the right to challenge the Emirates Team New Zealand in the America’s Cup match.

Earlier this month, after 10 hard-fought regattas, Emirates Team New Zealand succeeded in defending the 36th America’s Cup with a 7-to-3 victory over Luna Rossa.

This was the sixth America’s Cup challenge for Bertelli — and he’s already looking ahead to the next competition.

The entrepreneur has confirmed he invested 65 million euros in the latest effort. Luna Rossa is now 100 percent privately owned by Bertelli.

The development of Luna Rossa’s AC75 model, built by Persico Marine, employed more than 90 people, of which 37 were designers, for almost two years for a total of 78,000 working hours. To create the hull, they used 7,000 square meters of carbon fiber and 400 square meters of aluminum in a honeycomb structure. The carbon foil arms, each weighing 500 kilos, are designed to support a maximum weight of 27 tons. A soft wing is another innovation of the AC75, with two parallel mainsails. This latest model was unveiled in September 2019, and Bertelli’s wife Miuccia Prada for the ninth time acted as godmother to a Luna Rossa boat.

Here, Bertelli reveals just how passionate the designer herself is about the sailing effort, his own determination to one day win the America’s Cup and his frustration in not being able to be closer to the races in New Zealand, given the travel restrictions related to the pandemic. 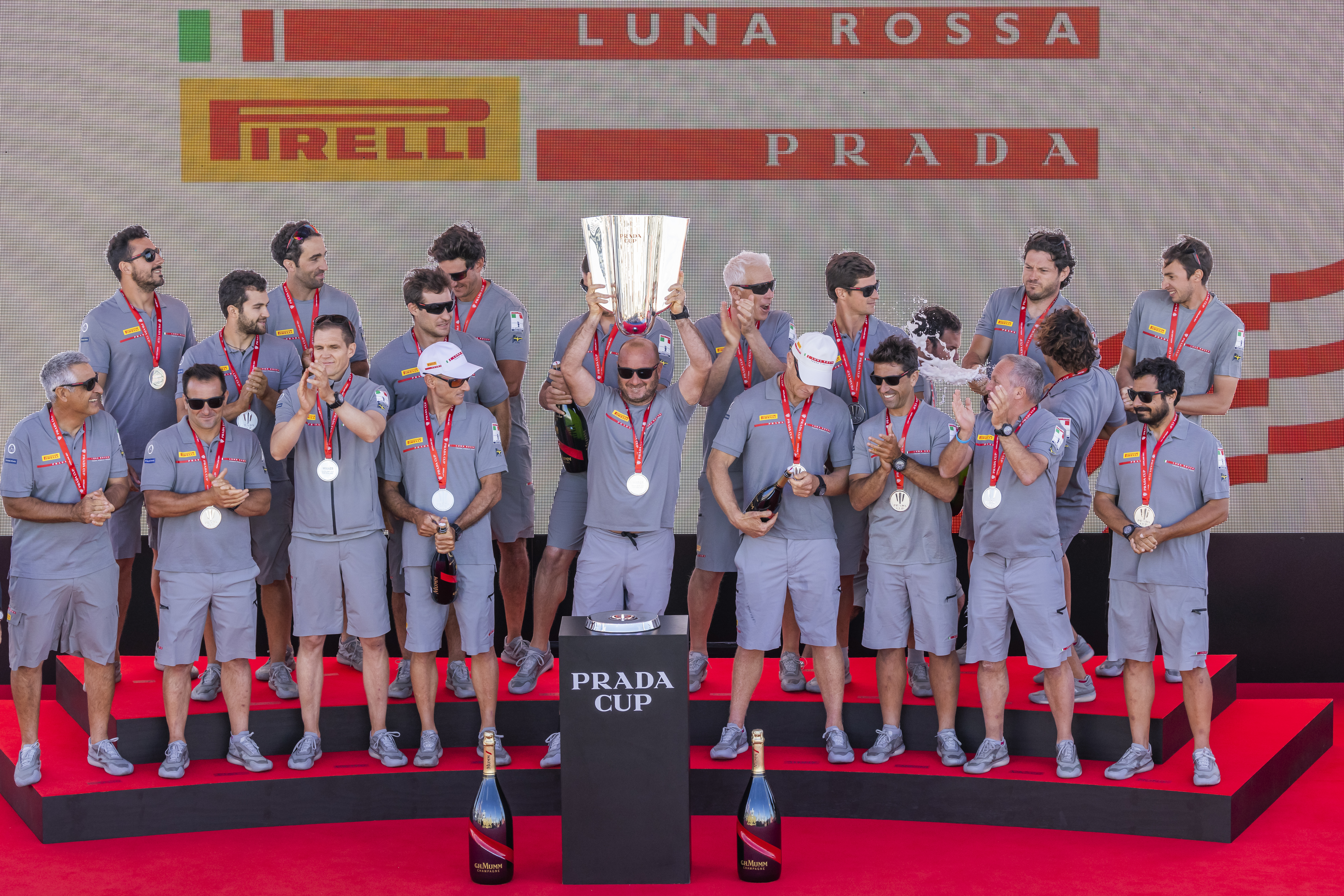 WWD: First of all, congratulations on the results achieved and on succeeding in making many Italians dream with you. Now that all is said and done, how do you view Luna Rossa, the team and the performance? Are you disappointed or satisfied nonetheless?

Patrizio Bertelli: Certainly not embittered, but not completely satisfied either. Our goal has always been, and still remains, to win the cup. The outcome of this challenge is overall positive, and the final score, that is still among the best achieved by a non-winning challenger in the history of the America’s Cup, shows the team’s true value and its ability to have stood up to a very strong defender. Many have judged our crew as being the best in this America’s Cup.

WWD: What most impressed you in watching Team Emirates New Zealand and their boat?

P.B.: Team New Zealand had the option to sail a very low and fast mode, but Luna Rossa had a very effective high mode. I believe that these were the biggest differences.

WWD: Can you confirm your intention to participate in the next America’s Cup? Is it true that you will not sponsor the Challenger’s Cup?

P.B.: I have declared it publicly and I confirm our participation, although we are waiting for more information from the Defender and Challenger of Record. Based on this, we will also evaluate our involvement in the challenger selection regattas.

WWD: What did you personally learn from the latest America’s Cup experience?

P.B.: This event confirmed what I had already learned from previous editions: to grow and develop the performance of boat and crew you have to race and compete with your opponents. In the semifinals, we improved a lot and fine-tuned our maneuvers and on-board communication.

WWD: What was it like to be in Italy and not in Auckland? Did you manage to see the races in real time?

P.B.: Of course I saw them all! It was very frustrating to watch without being there….

WWD: Your wife Miuccia Prada has christened all the different versions of Luna Rossa. How did she experience this edition of the cup?

P.B.: Miuccia is our number-one supporter! She is very passionate, even though she doesn’t express it so openly. She also watched every single race on the live broadcast.

WWD: What will happen now to Luna Rossa? Will the boat sailing in the next America’s Cup be a different version? Do you believe the team will remain the same? Will skipper and team director Max Sirena stay on?

P.B.: The next America’s Cup will be raced with the same boat class, the AC75. In all likelihood, the class rule will be optimized and will undergo some changes, as happens in all new classes, therefore the next Luna Rossa will be an evolution of the boat that participated in this edition.

The team will probably undergo some small changes as well, but the core will remain intact, as is my confidence in Max Sirena.

WWD: Do you think Woolmark and Panerai will continue to sponsor Luna Rossa? Or Pirelli?

P.B.: It is their decision. We have had a very positive feedback from all of them and I believe that, aside from the passion and enthusiasm that [Pirelli CEO] Marco Tronchetti Provera has always showed us, Pirelli can also consider this participation as very rewarding.

P.B.: We have gathered a lot of interesting data and information that we will analyze and evaluate.

WWD: I know that you are motivated by your own passion for sailing in endorsing the America’s Cup, but do you already have any information on the feedback the Prada brand has received thanks to the visibility of the Prada Cup and the America’s Cup?

P.B.: The Nielsen agency has been commissioned a worldwide research that analyzes the visibility of the events and brands, both of the teams and event sponsors, through all media, including social media and the internet. We expect the result of this report in about six weeks, but the first indicators are very positive.

P.B.: We worked in synergy on three channels, each of which amplified the message to a different audience: Prada, Luna Rossa and the America’s Cup. Here again the feedback has been very positive, considering that we brought together worlds that in many cases are very distant from each other. 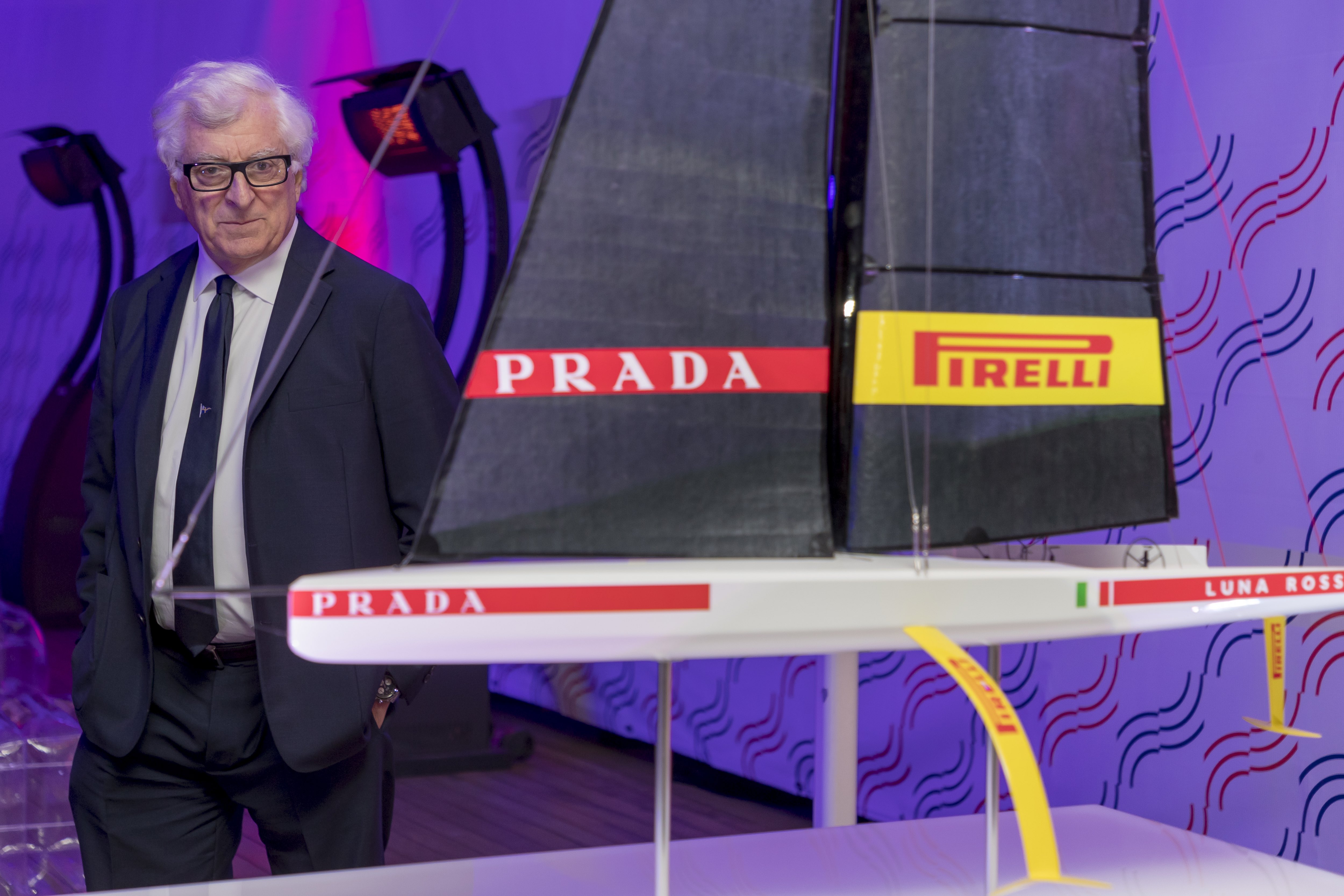