Prince William and Duchess Kate’s Sweetest Moments With Their Kids

Following the memorial service, the late monarch’s coffin was marched to Wellington Arch by members of the royal family including King Charles III, Prince William, Prince Harry, Prince Andrew, Prince Edward and Princess Anne. As Elizabeth was moved from the gun carriage to a hearse vehicle, Charlotte burst into tears alongside her mother, Princess Kate. 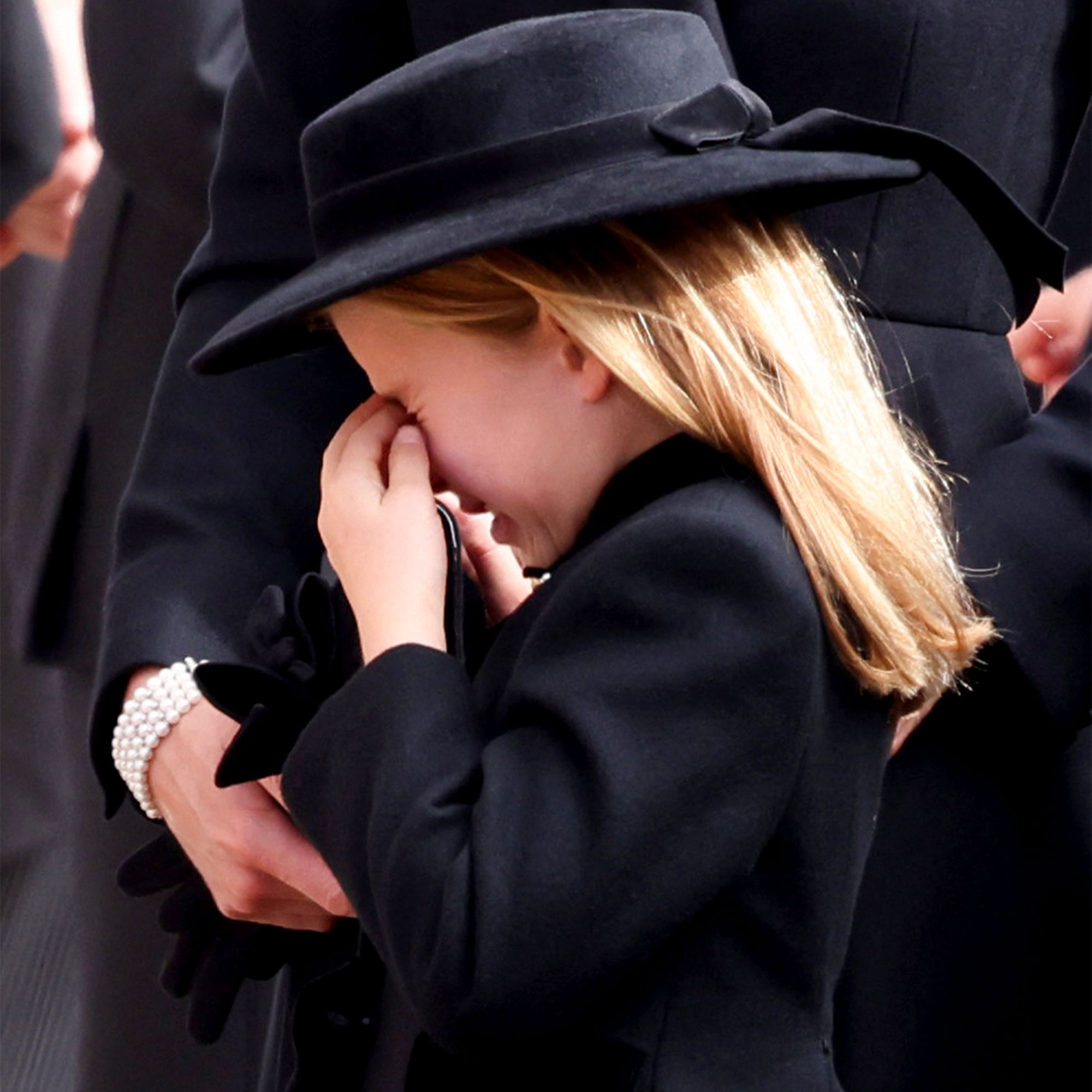 The Princess of Wales, 40, comforted her only daughter amid the emotional moment. Before the public reaction, Charlotte joined her brother Prince George, 9, at the procession. William, 40, and Kate’s eldest kids walked alongside their parents, and in front of Harry, 38, and Meghan Markle, during the traditional service. Charlotte also wore a brooch gifted to her by Elizabeth while paying her respects.

Meanwhile, Charlotte’s youngest sibling, Prince Louis, 4, wasn’t present at the funeral. Ahead of the monumental event, Kate opened up about her child’s response to his great-grandmother’s passing. “[Louis said,] ‘At least Grannie is with Great-Grandpa [Prince Philip] now,’” she told well-wishers on September 10, days after the sovereign’s death.

Following 70 years on the British throne, Elizabeth died on September 8 at her Balmoral Castle in Scotland. She was 96. Her eldest son, 73, ascended the throne shortly after his mother’s passing. Shortly after taking on his new role, Charles granted William his former title of Prince of Wales and bestowed Kate with the Princess of Wales moniker. 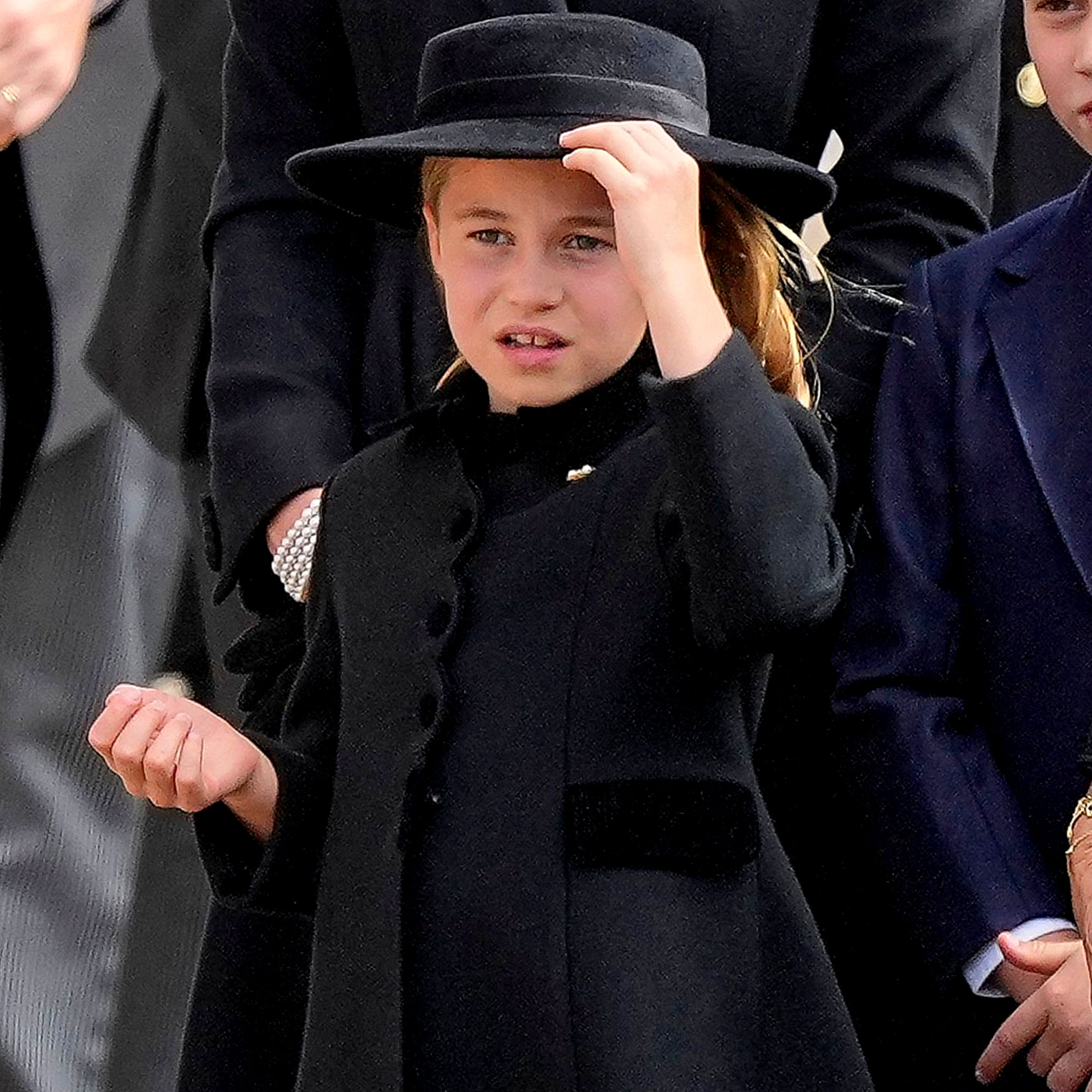 More than a year before Elizabeth’s death, her husband, the Duke of Edinburgh, was laid to rest in April 2021 at age 99.

At the time, a source exclusively told Us Weekly how William and Kate were attempting to explain Philip’s death to their kids. “William told George, Charlotte and Louis that Prince Philip has ‘gone to heaven’ and ‘is an angel now,’” a royal insider shared. “They’re still so young so he and Kate wanted to let them down gently.”

The insider noted that George, Charlotte and Louis felt their great-grandfather’s absence, adding, “Naturally, the children are very upset, particularly George and Charlotte. Louis is still very young and had only met Prince Philip a couple of times.”

According to the source, William and Kate came together with their kids to remember Philip’s memory. “George, Charlotte and Louis helped William choose a photograph of Prince Philip to hang in their home in memory of him,” the insider added.

Elizabeth, for her part, addressed her husband’s death after a mourning period of eight days.

“While as a family we are in a period of great sadness, it has been a comfort to us all to see and to hear the tributes paid to my husband, from those within the United Kingdom, the Commonwealth and around the world,” she said in a statement after his death. “My family and I would like to thank you for all the support and kindness shown to us in recent days. We have been deeply touched and continue to be reminded that Philip had such an extraordinary impact on countless people throughout his life.”