Half term duties! Princess Leonor of Spain, 16, joins her parents King Felipe VI and Queen Letizia and sister Sofia, 15, at a concert in Oviedo as she returns from Wales’ ‘Hippie Hogwarts’

Princess Leonor of Spain has reunited with her glamorously dressed family at a concert in Oviedo today.

The 16-year-old heir to the throne has been studying at UWC Atlantic College in Wales since September 2021 – but she has headed home for a week of down time with her loved ones during half term, which officially starts tomorrow.

Appearing just as stylish as her mother, Queen Letizia, the young royal opted for a flashy hot pink suit to the glitzy event, where she was also joined by her father King Felipe VI and her sister Princess Sofia, 15.

Sofia looked sophisticated as ever in a wrap turquoise dress, while Letizia commanded attention in a black halter neck dress from Teresa Helbig. 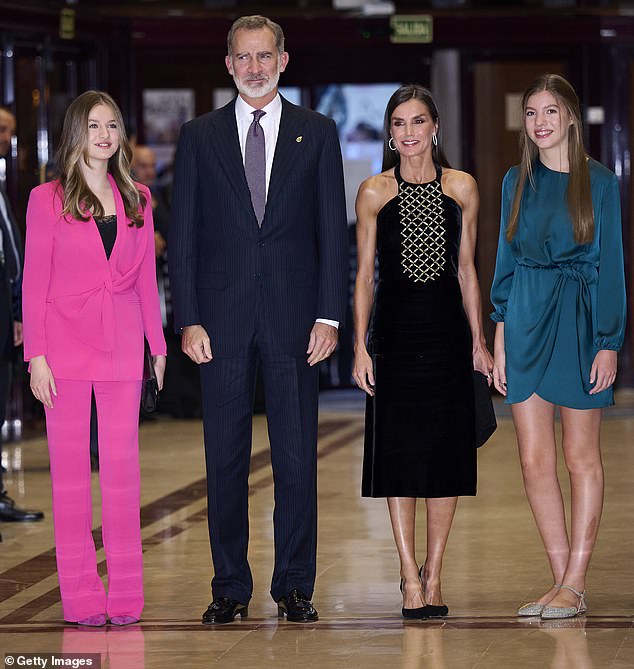 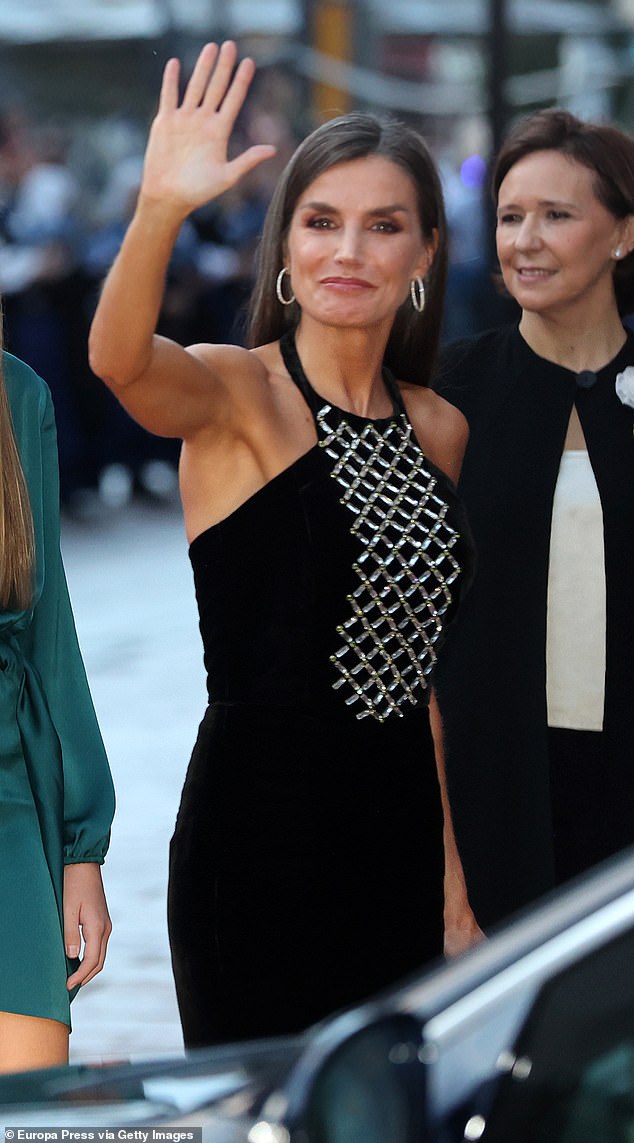 Letizia, 50, stunned in a chic black gown which showed off her muscular arms, accentuated with a halter neck bodice. It featured geometric rhinestone detailing and flowed down just below the knees.

Adding even more glitz to her ensemble, she accessorised with ornate hoop earrings, holding onto a rectangular clutch. She opted for a warm make-up look, featuring pink and peachy tones.

Looking effortlessly elegant, the beaming royal wore her hair straight down, posing for cameras as she waved at the engagement.

Elsewhere Felipe, 54, looked dapper in a navy suit with a mauve tie.

The concert is hosted by the Princess of Asturias Foundation, which, according to its website, aims to ‘contribute to extolling and promoting those scientific, cultural and humanistic values that form part of the universal heritage of humanity’.

It comes as Leonor – the Spanish heir to the throne, who started her second year at the UWC Atlantic College at St Donat’s Castle in Wales, is set to train with all three branches of Spain’s military from September 2023. 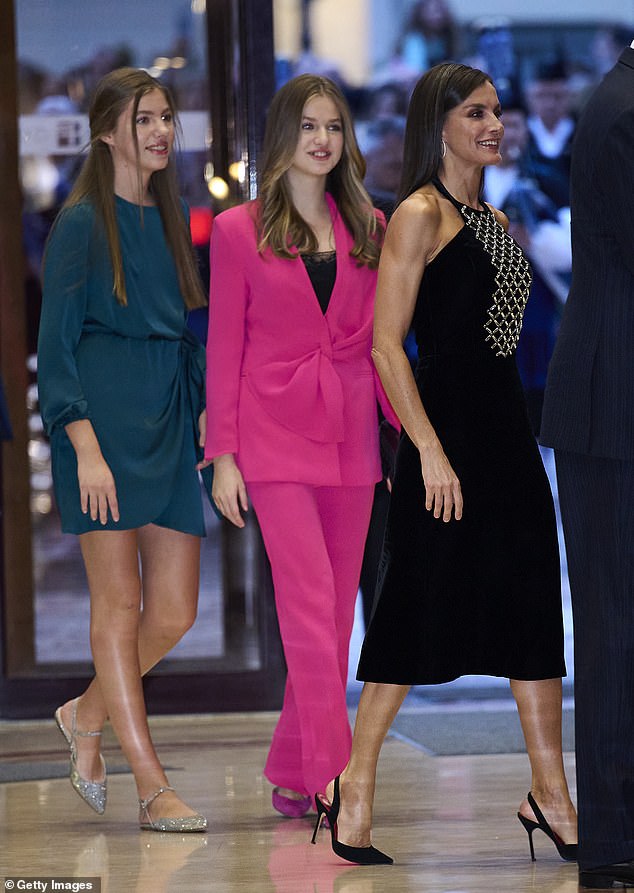 Letizia (pictured right), 50, stunned in a chic black gown which showed off her muscular arms, accentuated with a halter neck bodice 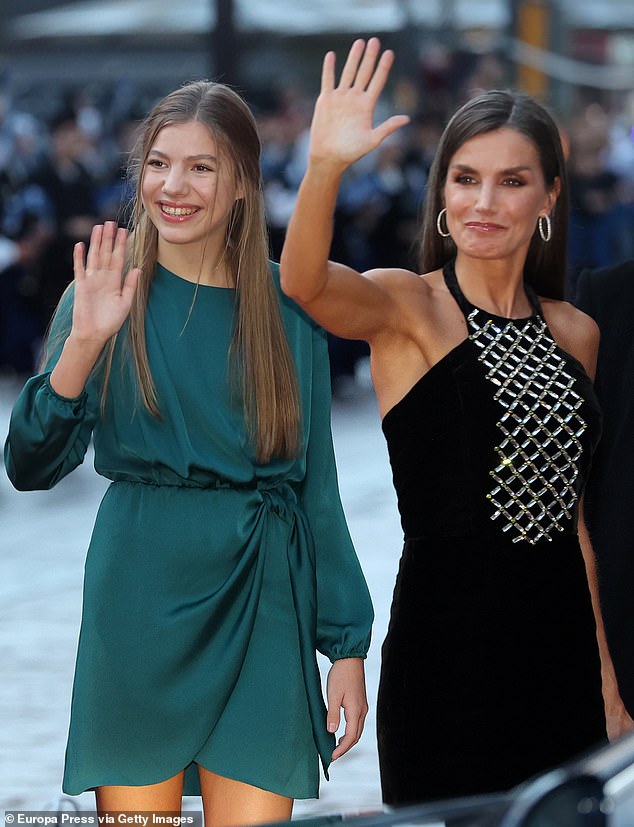 Letizia (pictured with her daughter Princess Sofia) accessorised with ornate hoop earrings, holding onto a rectangular clutch. She opted for a warm make-up look, featuring pink and peachy tones 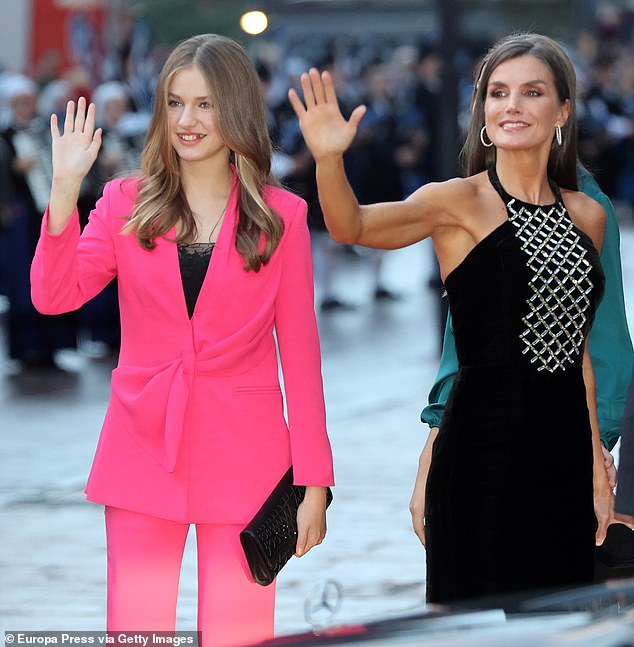 Letizia wore her hair down straight, posing for cameras as she waved at the engagement whereas as her daughter Leonor styled her tresses in waves

The daughter of Felipe and Letizia will follow in her father’s footsteps and will train with the army, the navy and the Spanish air force before moving on to the rest of her university studies.

Last month the Spanish newspaper El Pais reported that Leonor’s military training would culminate with a stint on board the Juan Sebastián de Elcano, a training ship used by the Spanish Navy.

It was also revealed that the young Princess would go on to study law at university once her training with the military is complete.

Her choice of university has not been revealed yet, however, her educational trajectory is extremely similar to her father’s, King Felipe VI. 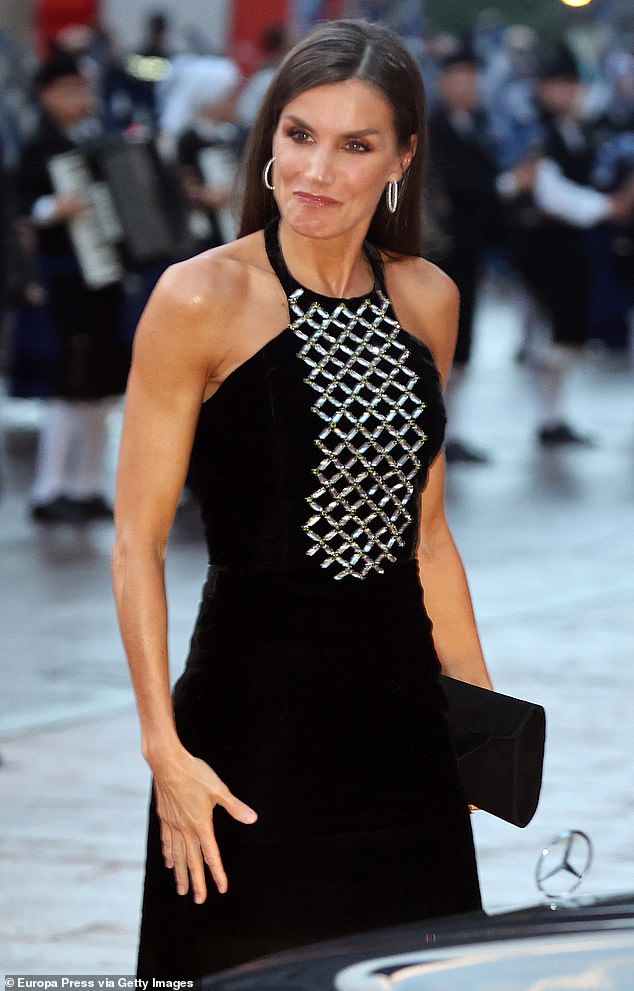 The concert is hosted by the Princess of Asturias Foundation. Pictured, Letizia during the outing today 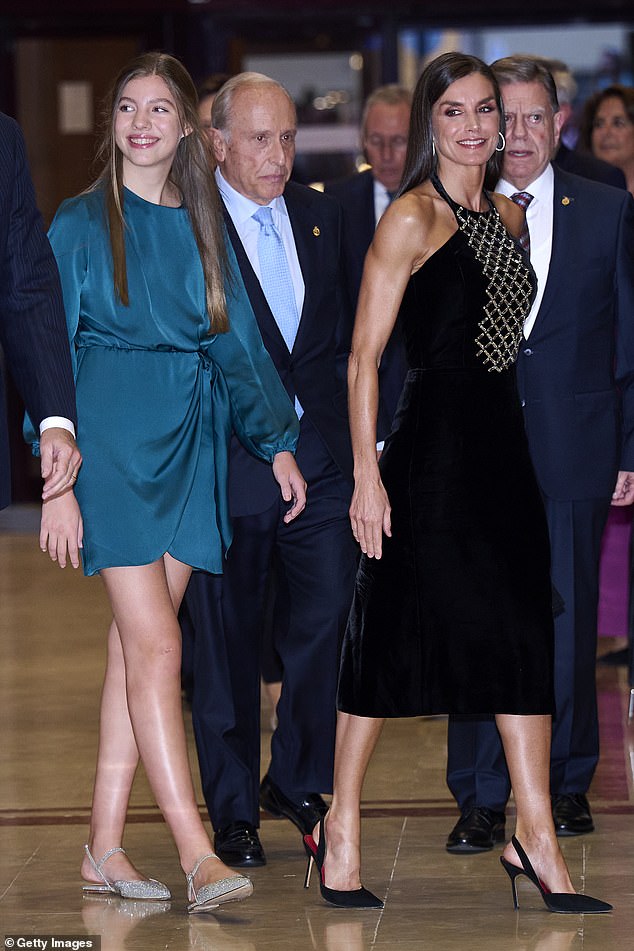 Letizia flaunted her toned shoulders in the dress, teaming the black gown with chic stiletto heels 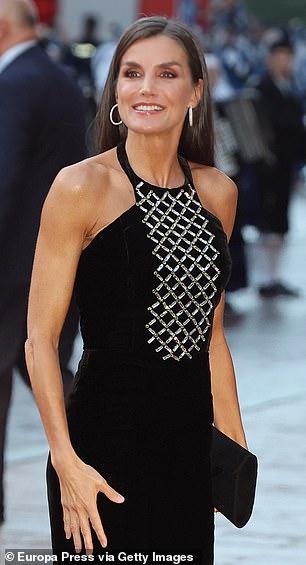 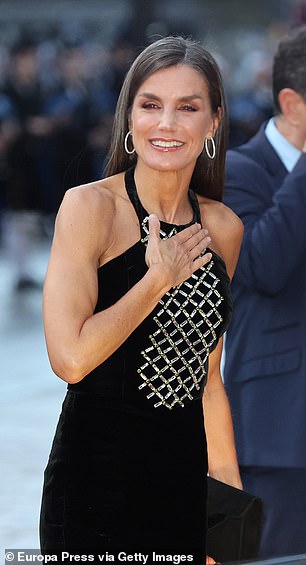 It comes as Leonor – the Spanish heir to the throne, who started her second year at the UWC Atlantic College at St Donat’s Castle in Wales, is set to train with all three branches of Spain’s military from September 2023. Pictured, Letizia 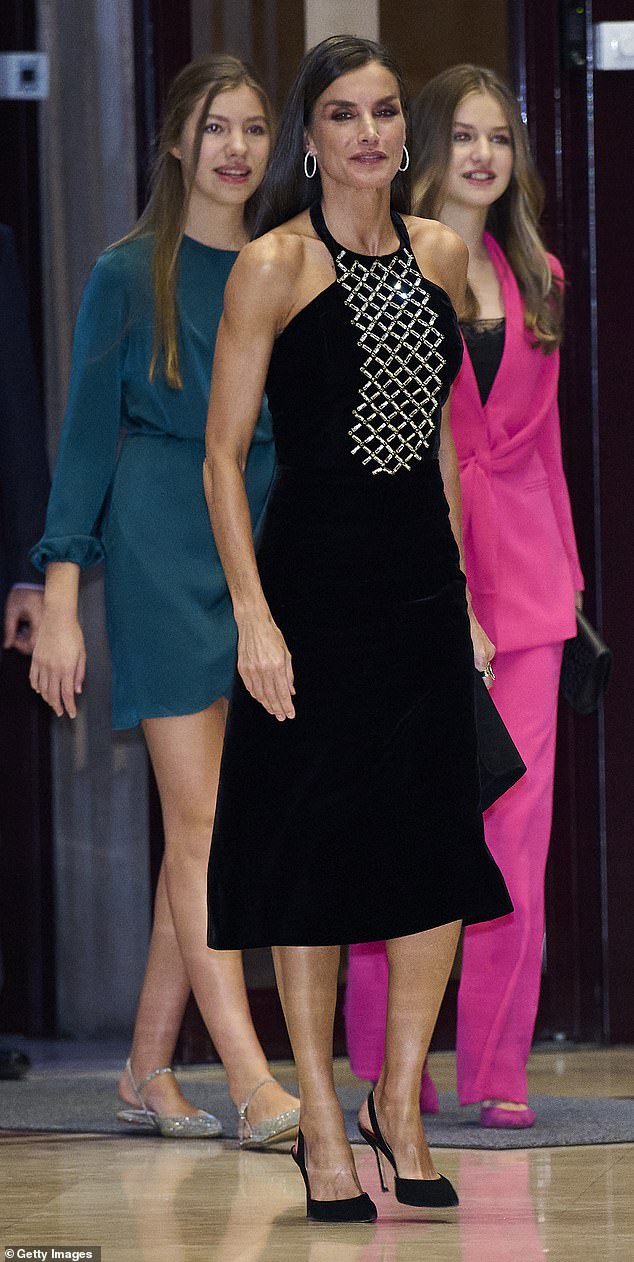 Letizia grinned as she arrived at the event with her daughters Leonor and Sofia, as well as her husband

After graduating from high school at Lakefield College in Canada, Felipe returned to Spain and attended the General Military Academy of Zaragozo, and went on to study at the Naval Military School in Marín.

He ended his training with a stint at the General Air Academy in San Javier.

His also completed his military training with a stint on the shop Juan Sebastián Elcano aged 18 in 1987, and went on to study law at the Autonomous University of Madrid.

Currently, Leonor, who is understood to speak four languages including Mandarin, juggles her life as a young princess with her work as a student at the Welsh boarding school, dubbed ‘Hippie Hogwarts’ thanks to its progressive approach to education and picturesque castle setting.

During the school holidays, Leonor returns home to Spain where she carries out royal duties. She has carried out a number of solo engagements, as well as ones undertaken alongside her parents and beloved sister.

The talented teenager, who has inherited her mother’s polished sense of style, is also understood to be an accomplished cellist, and has honed her skills in tennis, sailing and gymnastics at an American summer camp.