Making your own prom dress can save you money, but making your prom dress out of duct tape can win you a scholarship.

That’s what happened when Larissa Leon won Duck Brand’s 21st annual Stuck at Prom Scholarship Contest with her stunning folklorico-inspired dress – all of which was made from Duck brand duct tape.

Larissa, 17, told Fox News her colorful gown was made with 47 rolls of duct tape and weighs about 20 pounds. 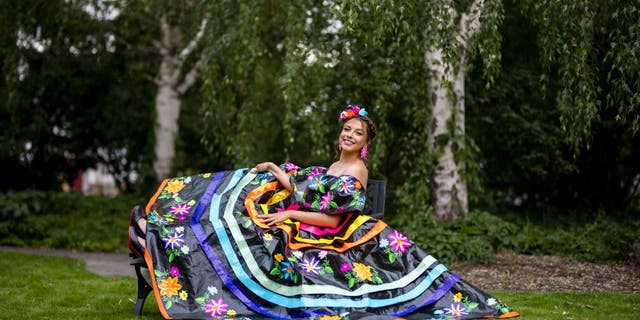 Every single part of the dress is made out of duct tape, including its striped ribboning, embroidered flowers, flowy sleeves and intricate lacework.

She also crafted a matching duct tape purse, flower crown, earrings and shoes. Duck Brand duct tape prices range from roughly $4 to $7 per roll depending on size and color.

In total, Larissa says it took her 163 hours to put the whole look together, and her hard work certainly seems to have paid off considering she won Duck Brand’s grand prize for “Best Dress” – a $10,000 scholarship.

“I knew that I wanted to do something really big, something very colorful, not only a dress I wanted it to like represent me and be a part of me because I didn’t just want to do a regular old prom dress,” Leon said during a phone interview. “I wanted it to be a part of me. So, with that, I took a lot of inspiration from my Mexican culture with folkloric dance and those types of dresses.”

While Larissa demonstrated to the world that she has some serious duct tape-based fashion skills, her dream career is to become a dermatologist.

When asked how she learned about the Duck Brand scholarship, Larissa said she found out about the company’s Stuck at Prom Scholarship Contest when duct tape crafting surged in popularity during the 2010s.

As someone who has liked to crochet, sew and work on DIY projects from a young age, Larissa says she told herself she’d apply for the scholarship when she became old enough. Before that day came, though, she got plenty of practice in designing duct tape wallets and other accessories.

“Larissa has always been very creative and artistic since she was very little. She has always been doing some sort of art project, designing or doing a science experiment, so when she started doing this project I was like, ‘Oh no, here we go again,’” Larissa’s mother, María Perez, told Fox News.

According to Perez, her daughter worked on her entry for around three months and their home was covered with duct tape during that time. Some nights Leon hardly got any sleep while she balanced school work and designing.

“I was amazed [with] how nice it had turned out and how from a distance it looked like real fabric,” Perez said of Larissa’s final product. “It makes me really happy and proud to know that all her hard work paid off and that people recognize the beautiful dress she created. I know this means a lot to her, and as her mother, I’m so proud of her for setting goals [for] herself and achieving them.”

Larissa, who is from Sunnyside, Washington, told Fox News she wants to thank her community for their support.

Aside from community votes, Duck Brand’s Stuck at Prom Scholarship Contest had a panel of judges ranked entries based on five categories all worth 20% of their final score, including workmanship, originality, use of color, accessories and use of Duck Brand duct tape. 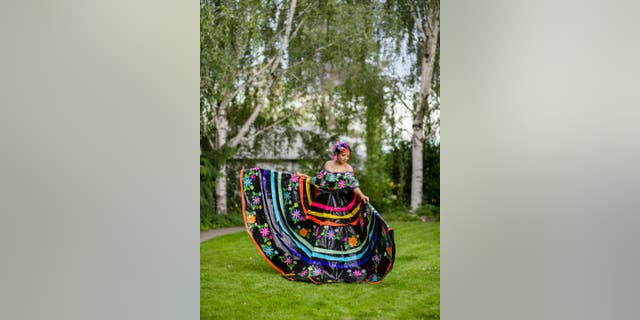 Larissa Leon says she’s grateful to everyone who showed her support and voted for her Duck Brand Stuck at Prom Scholarship Contest entry. She plans to use her scholarship to pursue her dream of becoming a dermatologist.
(Ob Cruz / Ob Cruz Photography)

“Each of our participants pushed the boundaries with their designs to enter this year’s contest and we’re beyond impressed by their determination and skill to make never-before-seen looks out of Duck Tape,” said Ashley Luke, a senior product and global brand manager for Duck Brand’s parent company, Shurtape Technologies.