While Labor’s refashioned campaign rolled on without its leader, Scott Morrison went fishing for votes without subjecting himself to scrutiny on Saturday.

After Labor leader Anthony Albanese was struck down with COVID-19 on Thursday, Morrison hasn’t taken the opportunity to rest. 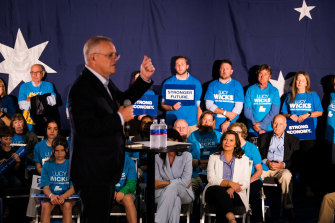 Scott Morrison addressed a campaign rally on Saturday as his wife Jenny looked on, but he didn’t face reporters.Credit:James Brickwood

The prime minister, along with his wife, Jenny, visited the NSW Central Coast on Saturday to campaign in two marginal seats, where he visited a camping and fishing equipment store before making a fiery speech at a campaign rally.

But for the second time during the campaign, Morrison refused to front the media at a press conference. He also refused to be grilled on Good Friday, when he made only brief remarks.

Morrison visited the BCF store in the Liberal-held marginal seat of Robertson, alongside incumbent MP Lucy Wicks, to trumpet a $20 million announcement to upgrade boat ramps, jetties and campground facilities. The package is an extension of a similar announcement made during the 2019 campaign.

Asked there why he wasn’t doing a press conference, Morrison said: “I look forward to seeing you at [the campaign rally].”

An hour later, Liberal members crowded a recreational centre dressed in blue shirts with slogans like “Strong Economy. A Stronger Future” and “Unemployment is 4%” – in reference to the Labor leader’s infamous gaffe on the first day of the campaign. Political rallies in Australia are increasingly looking more like something out of America, and this one was no different.

The rally was in the electorate of Dobell, which is held by Labor on a 1.5-point margin and is being heavily targeted by the Liberals to offset losses elsewhere.

Morrison focused on border protection and the economy, as he accused Albanese of not having the experience to manage either and criticised him for not supporting temporary protection visas for refugees.

“There were three components, Anthony if you’re paying attention, three components to stopping the boats. One, don’t get rid of temporary protection visas. Two, make sure you have offshore processing that works. And three, you turn back the boats and you know how to do it,” he said. 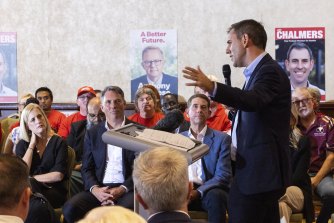 A cheer squad of red-clad supporters descended on the Logan Diggers RSL in his safe seat of Rankin where, after the club’s PA system had finished announcing the winners of the meat raffle, Chalmers officially launched his re-election campaign.

In a function room next to the pokies, adorned with faux-Grecian columns and a carpet resembling an LSD fever dream, the man who may be treasurer in four weeks told his supporters: “We’ve a distance yet to travel.

“The forces of a stale status quo always fiercely resist change in this country,” Chalmers said.

“This is not easy. Having a leader who is forced into seven days at home makes it a little bit harder. Let’s be honest about that. That is not usually what happens in a federal elections campaign.”

Chalmers also delivered a message on behalf of Albanese, who he had spoken to the previous evening: “He wanted you know to he is feeling ok. He’s a little bit knocked around. He will back amongst it, back in the fray as soon as he can.”

The Labor campaign, still minus Albanese, is expected to head to the Northern Territory on Sunday for an announcement about training Indigenous health workers and a commitment to spend $15 million improving the water supply in remote communities so up to 30 new dialysis units can be used to treat people with chronic kidney disease closer to their homes.

Cut through the noise of the federal election campaign with news, views and expert analysis from Jacqueline Maley. Sign up to our Australia Votes 2022 newsletter here.