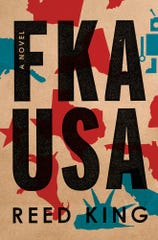 This novel starts with a map. It looks sort of like the United States, if someone took a baseball bat to it. California is lopped off, the Great Lakes region has been smooshed into something called the Soviet Federated Frontier, and “Floridia” is an island off the coast.

Welcome to the world of Reed King’s “FKA USA” (Flatiron, 463 pp., ★★ out of four), a futuristic U.S. that has splintered into territories ruled by corporations and bandits. Sixteen-year-old Truckee Wallace works the assembly line in the Crunchtown 407 factory (“I was one-thousandth responsible for every cargo load of Flavor Blast Cheez Dust™ that blew out of the factory doors and chugged on to another production department”). He has few goals in life beyond maybe persuading a girl to have sex with him someday and making enough from his meager paychecks to upgrade his VR headset.

This humdrum existence is upended when the company president calls Truckee into his office and tasks him with escorting a mysterious talking goat across the lawless middle of America. Truckee’s story becomes a sort of “Mad Max” reimagining of “The Wizard of Oz,” complete with its own version of the Yellow Brick Road. Truckee has his own versions of Dorothy’s friends, too, including Sammy, an android freed from a lifetime working as a pleasure bot, and Tiny Tim, who’s got a case of bad head wiring.

King, the novel’s pseudonymous author, takes infectious joy in his imagined world; its impressive layers are the best reason to read the book. “FKA USA” is riddled with footnotes and digressions and interludes and commentaries. This avalanche of minutiae makes it feel as if King is talking at us more than telling us a story, however, and the storyline, already on the wispy side, soon suffocates.

If taken less as a novel than as an encyclopedia of an imagined future, “FKA USA” has a lot to offer. King explores ideas of humans who “transspeciate” to a cat form, Monsanto-style fast-cycling crops that eventually kill their farmers, a virus that grants outsiders neural control of a person and a PTA run by literal clones. The book’s not afraid to ask big questions, like “why, if God created the universe, he couldn’t invent endless oil fields and soil that didn’t turn irradiated and an ozone layer that didn’t vanish like a cloud of vape smoke.”

For such a futuristic world, though, “FKA USA’s” sexual politics are decidedly retrograde. Women are either lavishly hot (“Her cleavage, I felt, warranted a real hard look-see”) or grotesquely unattractive. Granted, our protagonist is a sixteen-year-old boy, but after spending nearly five hundred pages in his mind, his limited view of women starts to feel squeamishly like “FKA USA’s” instead.

Richly textured but curiously shapeless, “FKA USA” is a wander through a strange and fascinating future, nudged along by weak currents of story.