Australians applying to leave the country are increasingly planning to stay overseas for more than three months to improve their chances of getting permission from the federal government.

The Australian Border Force commissioner's guidelines and operations directives, recently published for the first time, confirm that a person who "has a compelling reason and will remain overseas for at least three months" is likely to be approved for outbound travel. 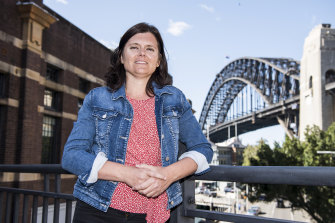 Melanie Krauss is heading back to Germany where she grew up for a few months to take care of her father after an operation. Credit:Steven Siewert

Adam Byrnes, the principal lawyer at Visa & Citizenship Lawyers in Sydney, said he had long been advising clients that "the longer the duration of travel, the higher the chance of success". He found that within the past few weeks, Border Force had started demanding more evidence this was true.

Since March, citizens and permanent residents have had to apply to Border Force for permission to leave the country, under a policy intended to contain COVID-19. Meanwhile, temporary residents and visitors need an exemption to enter the country, even if they hold a valid visa.

At the start of this month, 40,833 Australians had been permitted to travel overseas and nearly half were approved on the basis of "personal business including those departing for more than three months". In August alone, 11,278 people were granted exemptions on this basis, up from 675 in March and April.

Mr Byrnes, the visa lawyer, said applying on compassionate grounds was an "extremely high bar" and he had seen multiple refusals where the medical evidence described critical illness and limited life expectancy but the application was still refused.

The ABF has refused permission for 13,311 Australians who applied to travel overseas. There were 116,522 requests in total, with a large number of requests neither approved nor rejected because the same person had made multiple requests or were already in an exempt category and did not require permission.

Last week the department also published guidelines and operations directives used to determine whether applications to leave the country get approved, which showed people with "a compelling reason and will remain overseas for at least three months" are likely to be approved.

Previously, the public guidelines did not mention anything about longer trips being viewed more favourably, but it was widely believed to be the case among thousands of people sharing advice and information on Facebook groups dedicated to navigating the travel ban.

Some people have received an exemption to travel with the official reason cited on the document as "relocating overseas more than three months" and shared this with the groups.

Australians travelling overseas are also preparing for longer trips because of a shortage of flights due to the government-imposed caps on international arrivals. Airlines are restricted to 30 passengers a flight and are routinely bumping economy passengers for those willing to pay more. About 27,000 citizens and permanent residents are stranded overseas and have registered their desire to return home with the Department of Foreign Affairs and Trade.

Sydneysider Melanie Krauss, a German citizen and Australian permanent resident, has received permission to travel to Stuttgart in October to take care of her elderly father after a knee operation. He lives alone and she is a physiotherapist.

Ms Krauss, 44, said she would prefer to be away for two or three months but applied for four to five months, knowing it would increase her likelihood of getting approval. She hopes to return to Sydney after four months but is prepared to stay up to a year if she can't get a flight home.

"It really messes with your mind when you can't plan," Ms Krauss said. "I've always been a planner and I can't plan any more because so many other people are making decisions that affect my life."

Ms Krauss said her situation was not unusual and she did not want pity but the travel ban made her anxious because it stripped away the comfort of knowing she was only a day's flight from her family.

She understood the reasons for it but believed it went too far, given a high proportion of the Australian population had family overseas and no other democratic country had such a restriction.