Like any inner city residence undergoing renovation, the Australian Museum – home to Australia’s and one the world’s largest Pacific Island Collections – has challenges when it comes to storage space.

Finding a temporary home big enough for over 60,000 precious objects from the Pacific Islands while the museum undergoes a $57. 5 million extension was hard enough. Let alone bringing in a six-strong curation team to crate and cart them, a transport team to move the precious cargo, and gaining the blessing of Sydney’s Pacific Islander communities who were initially opposed to the idea. 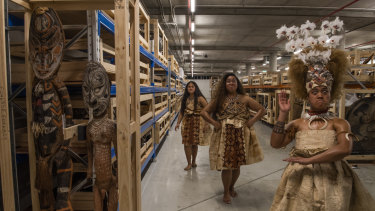 Nani Crichton, Miracle Temareti and Ashleigh Malama Pritchard of the Matavai Cultural Dance group view some of the 40,000 objects from Pacific collection in storage in Rydalmere.Credit:Louise Kennerley

Some items contain human remains – bones, teeth and hair – so the ancestral spirits needed to be treated tenderly too; according to tradition each item had to be spoken to before it was boxed and bolted down. While it was only a 22 kilometre journey from College Street to the storage facility in Rydalmere, the move entailed six months of packing from last November until May.

On Tuesday, Dr Mel, a native of Papua New Guinea, blew the conch shell to reawaken the spirits – the original owners of the objects in their new temporary home at Upjohn Park, Rydalmere. The artefacts will reside for the next five to 10 years in western Sydney, while the museum welcomes the blockbuster exhibition Tutankhamun:Treasures of the Golden Pharaoh, in the former ground floor storage space that housed the Pacific Collection.

"We needed the space, the collection was constantly crammed together in College Street, it was like going to Bunnings it was so stacked to the hilt," he said.

About 40,000 cultural objects are now cared for in a temperature controlled 4600 square metre storage space; the other 20,000 larger objects have gone to a Castle Hill facility. They include a vast array of objects from children’s toys to musical instruments, hunting tools, weapons, beads, bilum bags, carved posts and totem-poles sculpted in wood.

Even silk pillows were made to cushion the move of the intricate masks and Papua New Guinean head dresses, many from the museum’s Frank Hurley collection. Director and CEO of the Australian Museum, Kim McKay said the objects required not just specialist care but welcome rooms for easy access for the people from the Pacific Island communities who want to visit them until they are returned to a newly remodelled Pacific Gallery.

"Like anyone moving home, the move to Rydalmere has not been without its challenges. But we want this to be used by the entire Pacific Island community who can now access these precious objects in western Sydney rather than have to come into the city," she said. 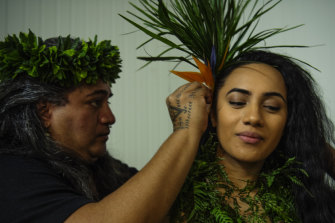 Jason Paulo and Danica Ta’ala of the Matavai Cultural Dance group welcoming some of the 40,000 objects from the Pacific collection to Rydalmere. Credit:Louise Kennerley

Dancers from western Sydney’s Matavai Cultural Dance performed a dance on Tuesday to symbolically set the objects free in their new home. The director of the dance troupe, Mary Jane Schwenke, said many in the community felt unsettled while the objects were in transit.

"For us this is a stepping stone to bringing the objects closer to our communities, it is a very emotional experience for us as many of these artefacts are over 100 years old and many of our own people have never set eyes on them," she said. 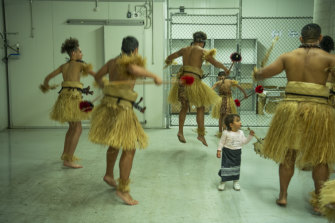