Loose Women panelist Saira Khan has provoked a furious debate, after coming out in support of a couple who refused to reveal their baby’s gender – even to family members.

Hobbit Humphrey, 38, and Jake England-Johns, 35, who live on a houseboat in Keynsham, Somerset, appeared on BBC One’s Inside Out last night to explain their decision, saying it’s the only way to stop people treating their child differently based on gender.

They have asked their family and friends to refer to their child Anoush, 17 months, as ‘they’ or ‘them’, and Saira said on today’s episode of the ITV panel show that she understands their decision.

‘A lot of us are doing this in today’s society anyway, we’re just not making a big deal out of it,’ she explained.

But those watching were far from impressed, with one tweeting: ‘I’m sorry! Each to their own, but that child is just going to be confused when they are older.’ 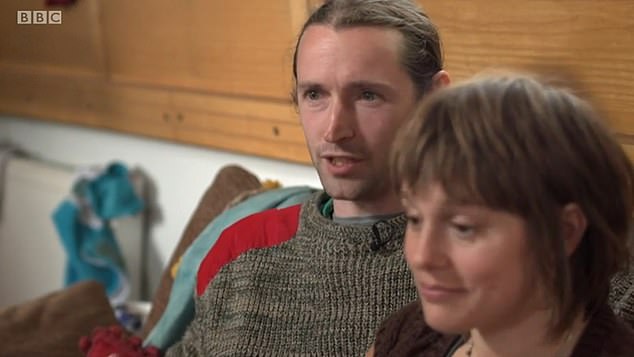 Viewers of Loose Women were stunned to learn of parents Hobbit Humphrey, 38, and Jake England-Johns, 25, from Somerset, who are keeping their child’s gender a secret 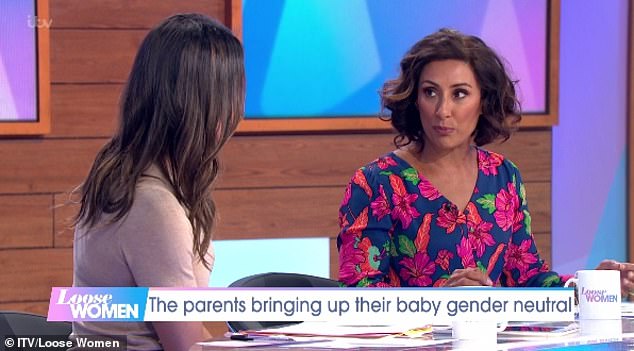 Saira Khan on Loose Women defended the couple, saying she had ‘essentially’ raised her children gender neutral, and suggesting that ‘a lot’ of parents did the same

Another tweeted: ‘You’re a boy or a girl. That’s decided before you are even born. It doesn’t matter how you bring your child up, you can’t change science.’

The panel were discussing mother Hobbit Humphrey, 38, and father Jake England-Johns, 35, who live on a houseboat in Keynsham, near Bath, who say they are currently dressing 17-month-old Anoush in both boys’ and girls’ clothes.

The married couple, both members of the Extinction Rebellion climate action group, are also asking friends and family to address the toddler using the gender-neutral pronouns, ‘they’ and ‘them’.

One of the child’s grandparents said they only found out the baby’s gender after 11 months, when changing a nappy.

But viewers were stunned by the story, with some slamming the parents on Twitter as ‘obnoxious’ and ‘just ridiculous’

They said the baby, whose name was changed to Charlie in the programme, will be allowed to decide at a later age on its gender and preferred pronoun.

Jake said: ‘Gender neutral refers to us trying to behave neutrally towards the child, rather than trying to make them neutral.

‘We’re not trying to make them be anything. We just want them to be themselves.’ 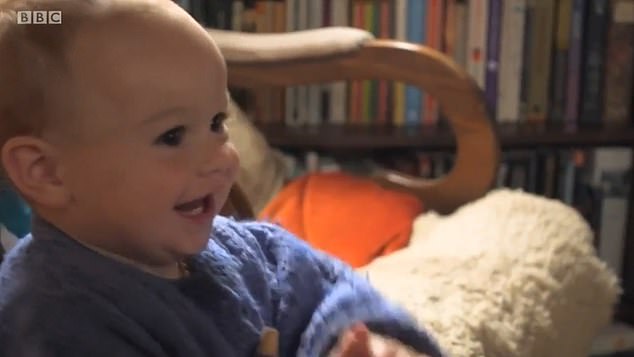 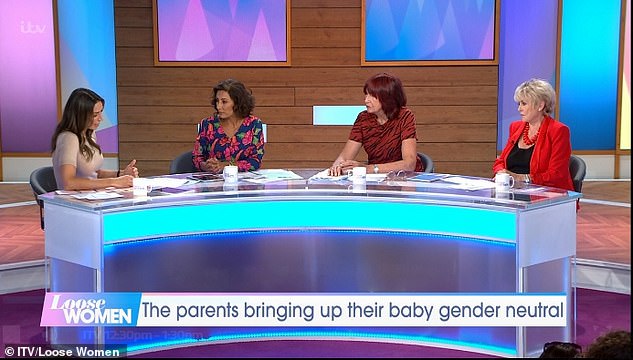 Saira Khan told the panel she could empathise with the choice to hide a baby’s gender, saying ‘a lot of us are doing this in today’s society anyway’

Saira noted that she couldn’t understand how people ‘got their knickers in a twist’ over the issue, and said that it shouldn’t matter as long as nobody as being harmed in the situation.

‘Essentially what this couple are saying is what I kind of did,’ the mother-of-two said.

‘When Zack and Amera were born, I didn’t automatically go and buy pink things and blue things, I just let them gravitate to whatever they wanted to.’

She added: ‘I didn’t choose to give them a “they” pronoun, or whatever.’

But while Saira said she was supportive of those who wanted to keep their child’s gender private, fellow panellist Gloria Hunniford slammed the idea.

Gloria said: ‘Every parent has a right to bring their children up however they want. I’m a million percent behind people being who they are in life. 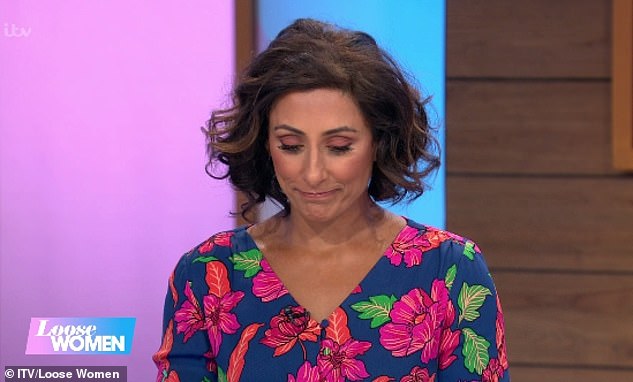 Saira defended the couple’s decision to keep their baby’s gender secret, and said she couldn’t understand how people ‘got their knickers in a twist’ over the issue

‘I do have my knickers in a twist, as you put it, about a baby. The boy has his bits, the girl similarly.’

‘But for me, and my grandchildren, I would never want to call it “they”.’

Meanwhile Janet appeared to agree with Saira, saying: ‘A baby isn’t aware of it’s sexuality anyway. I’m quite tolerant of this couple.’

‘I was very thrilled to get Meccano and I was very angry when I got a doll. Children have to decide for themselves. 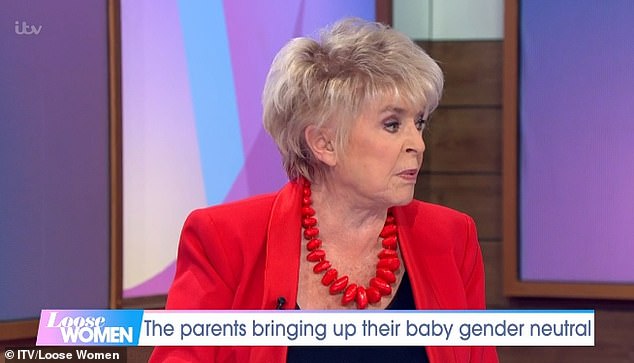 Saira clashed with Gloria on the programme however, who deemed it ‘ridiculous’ and ‘a bit odd’ to raise children without a gender

She added that she had found gender neutrality ‘really interesting’, noting: ‘And that is a gradual thing. Boys who might wear dresses and go back…

‘We are getting far more accepting of people who say, “I don’t know what my gender is”.’

But Gloria couldn’t hold herself back, retorting: ‘But they are taking that decision, they’re calling the baby they!’

She added: ‘To me, it’s slightly ridiculous. I just think it’s very odd.’ 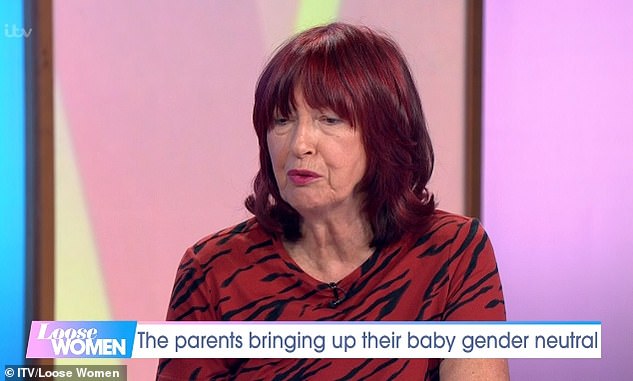 Janet agreed with Saira, saying that she found the evolution of gender ‘really interesting’, and saying that children ‘have to decide for themselves’ 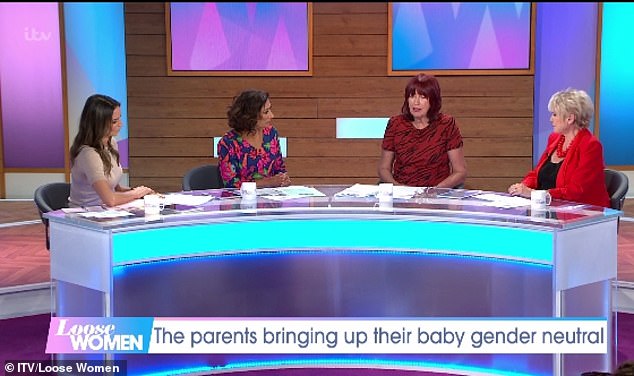 The panel clashed over their opinions on the topic, with Saira and Janet defending the couple, while Gloria said she was shocked by it

Viewers appeared to agree with Gloria, with one commenting: ‘What is so wrong with letting boys be boys and girls be girls? Will these bonkers parents not allow their son/daughter to call them mummy and daughter? I feel so sorry for this child.’

Another wrote: ‘This is obnoxious parenting, projecting their beliefs onto the child. Whilst they may try to hide the gender, the child’s DNA won’t hide it.’

Another commented: ‘I am all for being who you want to be but this is just ridiculous.

‘This child was born a girl/boy, whether they want to remain that gender as they grow older is up to the child – the child’s choice. The child is not genderless, they have a gender.’