School leavers who spend a gap year picking fruit could get a discount on their university loans under a plan put forward by a bipartisan parliamentary inquiry.

Other options proposed by the committee include letting unemployed people keep welfare payments and extending international students' visas if they agree to go bush to help address a rural labour shortage that threatens to see fruit rot on trees. 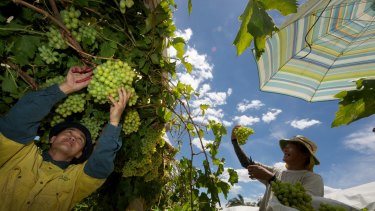 School graduates could take the work left behind by backpackers in agriculture and horticulture.Credit:Justin McManus

The parliamentary committee on migration is looking at ways to replace the 70,000 backpackers who typically pick up to 60 per cent of some fruit and vegetable crops but are missing from Australia's farms and youth hostels because of coronavirus travel restrictions.

Liberal, Nationals and Labor members of the committee endorsed proposals in its interim report including the idea of a "Gap Year at Home" program that would encourage school and university graduates to spend time doing agricultural and horticultural work.

Committee chair Julian Leeser, a Liberal MP, said with far fewer jobs available in industries such as hospitality, following the harvest trail was a good alternative.

"We have too many people who have seen Berlin before they've seen Bundaberg," Mr Leeser said. "You get to meet people from overseas … and bridge the city-country divide."

Agriculture Minister David Littleproud said the government was aware of the severity of the problem and had already extended backpackers' visas. "The government is also considering a number of domestic programs for Australians to participate in, some of which are detailed in the report," Mr Littleproud said.

For the next year, the committee recommends, unemployed people who move to the country should be given one-off payments to help with accommodation and moving expenses and be allowed to keep their JobSeeker benefits even as they are being paid for farm work.

Previous efforts to get people on welfare to move to the bush had failed, Mr Leeser said, adding "the key priority here is to get the fruit off the tree".

The report noted, but did not endorse, a proposal backed by some MPs on the committee to give refugees a pathway to permanent residency if they worked in the sector.

Labor's Julian Hill, who is on the committee, said the refugee plan should be part of the solution to the labour shortage but that the report offered a range of "pieces of the puzzle" in its other suggestions.

The Australian Workers' Union, which represents workers in agricultural sectors, called the plans "cute schemes" that did not address what it considers to be a core problem deterring locals from taking up farm work: unethical operators underpaying staff.

"But we've got to be mindful of the realistic numbers we'll get out of a program like that because there are real barriers to people moving to the regions," Ms Germano said of the committee's plans to have Australian graduates and unemployed people do harvest work.

Any emergency measures taken during the pandemic should not replace the regular migrant labour force the industry relied on, said Ms Germano, who grows cauliflowers and potatoes.

Get our Coronavirus Update newsletter for the day’s crucial developments at a glance, the numbers you need to know and what our readers are saying. Sign up to The Sydney Morning Herald’s newsletter here and The Age’s here.