Hospitals are being told to seek more cash from state and territory governments to handle a surge in coronavirus infections as Prime Minister Scott Morrison declares he will not give in to “shakedown politics” by spending more federal money.

Doctors fear hospitals could be overwhelmed by rising COVID-19 admissions and a growing load of elective surgery that must be delayed until the case numbers ease, ensuring the pressure lasts well into next year. 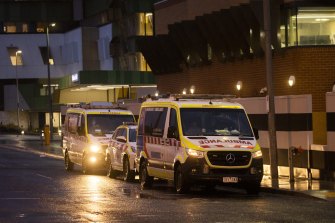 Doctors fear hospitals will be overwhelmed with COVID-19 admissions and a growing load of delayed elective surgeries.Credit:Paul Jeffers

But with federal funding on public hospitals on track to reach $25.5 billion this year, Mr Morrison said it was up to states and territories to spend the extra money needed to deal with a problem they knew would come.

Mr Morrison said there had been a lot of talk about the responsibilities of the states and one of them was to “run your public hospitals and get them ready to deal with any surge” that would come from rising coronavirus case numbers.

“There has been a lot of opportunity to prepare for this. And, I must say, it’s been a high priority item of the national cabinet,” he said.

“But I don’t think the pandemic should be used as an excuse for shakedown politics. They just need to get on with the job, get their hospitals ready.”

Mr Morrison said the government had “showered the states” with money during the pandemic as well as boosting outlays on hospitals by 70 per cent since 2013 compared to an increase of 40 per cent in state spending.

The flat rejection of the demand for more money came after Queensland Premier Annastacia Palaszczuk said her state could not open up without dealing with the load on the hospitals and that this meant more federal funding to help with the surge.

“There’s another big part to this story and that is to make sure that the hospitals can deal with the capacity because when Delta comes in, it will spread like wildfire,” Ms Palaszczuk said.

“The hospitals need increased capacity and that requires additional federal government funding for the growth that we will see. This will be unprecedented.”

Victorian Premier Daniel Andrews warned on Friday the state hospital system was under “immense pressure” even before the lockdown rules were relaxed, although he said there was no system-wide decision to halt elective surgery.

The federal budget estimates assistance to the states and territories to run public hospitals will rise from $22.6 billion last year to $25.5 billion this year before reaching $29.9 billion in 2025.

Australian Medical Association vice president Chris Moy said hospitals could be overwhelmed in the coming weeks and would need a new funding approach to overcome a federal cap that limits spending growth to 6.5 per cent per year even in the pandemic.

“The Commonwealth will try to get away with just some surge funding for intensive care units but this misses the point and they will not be picking up their true responsibility with the ongoing needs that ‘living with COVID’ will entail,” he said.

Dr Moy said the immediate pressure on hospitals from patients with COVID-19 was only part of the problem because the system would also have to catch up with elective surgery that had been delayed as well as the medical conditions that had grown worse in some patients while the virus took priority across the health system.

“They’re going to have to deal with the surge as well as the additional care in the aftermath,” Dr Moy said.

“We’ll hit a perfect storm of COVID, normal care, delayed care and having to keep vaccinating.”

”What the states want, and the AMA backs them, is a true 50:50 split, a removal of the cap per admission, better Commonwealth funding for vaccination and increased capacity,” he said.

“Although the states need to pitch in, they already have, and so more federal money is needed.”