Officials from key AUKUS working groups provided confidential briefings last month to US congressional leaders on the progress of the submarine negotiations, according to sources familiar with the briefings. 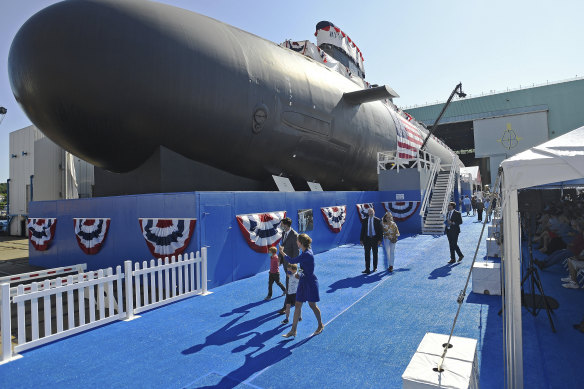 US senators have warned against supplying Australia with US Virginia class submarines before the US Navy is at full capacity.Credit:AP

These briefings spurred the top Democrat and Republican representatives on the Senate Armed Services Committee to write an alarmed letter to US President Joe Biden saying they were increasingly concerned about the implications of the AUKUS pact between Australia, the US and United Kingdom.

Specifically, the senators explicitly warned against any plan to sell or transfer Virginia-class submarines to Australia before the US Navy meets its current requirements.

Sources familiar with the briefings who were not free to talk on the record said an optimal solution for Australia’s fleet of eight nuclear-powered submarines was taking shape ahead of the March deadline for an announcement, but the discussions were still fluid and subject to change.

“We believe current conditions require a sober assessment of the facts to avoid stressing the US submarine industrial base to the breaking point,” Democratic Senator Jack Reed and Republican Senator James Inhofe wrote in their December 21 letter.

“We are concerned that what was initially touted as a ‘do no harm’ opportunity to support Australia and the United Kingdom and build long-term competitive advantages for the US and its Pacific allies, may be turning into a zero-sum game for scarce, highly advanced US [nuclear-powered submarines].”

Reed is the chair of the Senate Armed Services Committee and Inhofe was the top Republican on the committee at the time.

Former prime minister Malcolm Turnbull said news of the letter was rightly continuing to resonate in Australia days after it was revealed by specialist publication Breaking Defense.

“Almost completely overlooked in Australia is the fact that nuclear-powered submarines to be acquired from the US will not be able to be operated or maintained without the supervision of the US Navy,” Turnbull said on Twitter, describing this as an “abdication of Australian sovereignty”.

“AUKUS is a worthwhile and natural enhancement of already intimate security and intelligence relationships but the submarine element of the agreement delays vital capabilities and diminishes Australian sovereignty,” he said.

Tom Corben, a defence and foreign policy research fellow at the United States Studies Centre, said the letter provided an important reality check about the difficulties of turning AUKUS from a vision into reality.

“This is a good example of the different ideas out there within and between the AUKUS countries about what AUKUS is, what it should do and how,” he said.

“There’s not really consensus among the US, UK and Australia about what exactly AUKUS should do.” 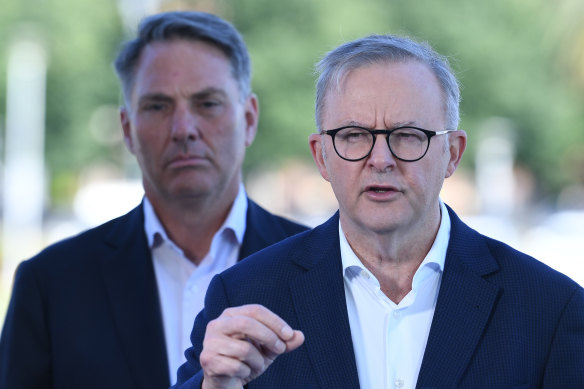 Prime Minister Anthony Albanese (right) and Deputy and Defence Minister Richard Marles held a press conference about the submarines after the US senators’ letter leaked. Credit:AAP

Corben said it was clear American shipyards were currently too overburdened to supply vessels to Australia while meeting the US Navy’s needs.

That would change, he said, if US shipyards received a “substantial capital injection” – including by an offer from Australia to help maintain and sustain America’s industrial base.

Opposition Leader Peter Dutton, who was defence minister when the AUKUS pact was struck on September 21, said on the weekend there was “no question” in his mind that buying a small number of submarines off-the-shelf from the US was still a possibility.

“I hope that the prime minister is able to continue to press the case,” Dutton said.

Defence Minister Richard Marles said the government was still on track for a March announcement of its submarine plans, but added: “There are lots of challenges and there’s no doubt that the pressure this places on the industrial base of the United States – also, the United Kingdom – is really significant. We’re very aware of it.”