And just like that … they’re back on the Upper East Side.

The stars of HBO Max’s “Sex and the City” revival, “And Just Like That…,” were spotted filming at hotspot The East Pole on Monday, spies tell Page Six.

We’re told that leading ladies Sarah Jessica Parker, Cynthia Nixon and Kristin Davis were all there, though Davis’ character, Charlotte, was accompanied by a pooch that wasn’t her famed King Charles Cavalier named Elizabeth Taylor. 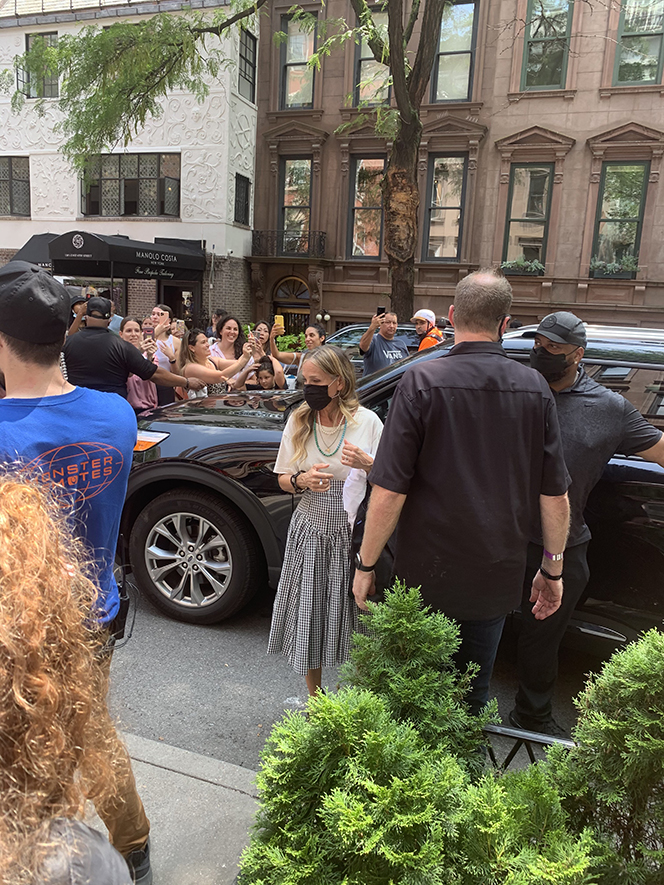 Instead, Davis was spotted filming with an English bulldog that, of course, came with a Burberry waste bag container — only the best for her pooches!

On Friday, HBO Max shared the first official images of the trio hitting the streets of the Big Apple. Parker wore the same outfit for Monday’s shoot that she wore in the promo pictures.

The new series is set to tell the stories of the three best friends as they now navigate the complicated journey of life and friendship in their in their 50s.

Unfortunately, the group will be embarking on their self-discovery journey sans original co-star Kim Cattrall, 64, who isn’t returning as the beloved, raunchy PR guru Samantha Jones.

The 10-part series has, however, confirmed the return of many characters, including leading men Chris Noth, John Corbett, David Eigenberg and Evan Handler, as well as fan-favorite besties Mario Cantone and Willie Garson.

“And Just Like That…” has added new characters as well, including Sara Ramírez as “a nonbinary, queer stand-up comedian.”

Garson recently dished to us about reuniting with the cast, describing the experience as “weird” but exciting.

“I think the feeling was, ‘Oh, my God, this is so weird, right?’” Garson, who plays Carrie Bradshaw’s campy best friend Stanford Blatch, told Page Six.

“And also, ‘Oh, my God, this is so completely normal.’ So at the same time, this is the weirdest thing ever and this is literally just like, ‘Oh, here we are again. Another terrific episode.’”