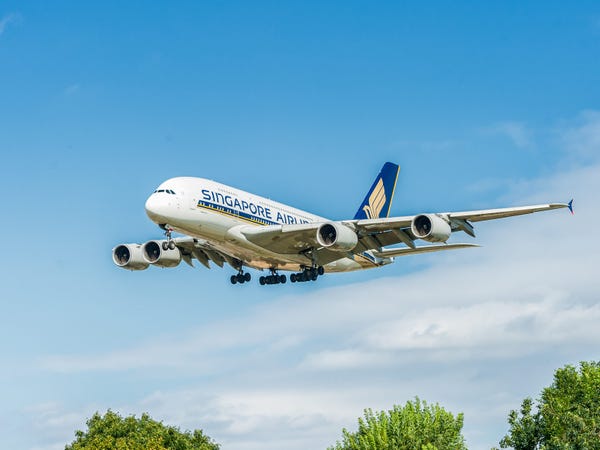 Singapore Airlines (SIA) has made a U-turn on its proposed no-destination flights.

In September, Business Insider's Evan Sully reported that the airline was planning to offer three-hour sightseeing trips that would both take off from and land at Singapore's Changi Airport.

SIA has now released a statement saying the plans will not come to fruition.

"An idea for a one-off short tour flight, or a 'flight to nowhere,' was also initially considered but not pursued after the review," the statement sent to Insider reads.

"We currently have no plans to revive the idea."

The group said in a statement: "We do not agree with the proposed 'flights to nowhere' initiative for two reasons: First, it encourages carbon-intensive travel for no good reason and second, it is merely a stop-gap measure that distracts from the policy and value shifts necessary to mitigate the climate crisis.

"This initiative is symptomatic of a culture that makes consumers responsible for deep-rooted, structural problems.

"In reality, the onus should be on SIA executives and policymakers to pivot towards more sustainable and equitable alternatives for its customers and staff."

With Singaporeans banned from traveling to all destinations bar a select few, instead of the flights to nowhere, SIA has launched a fleet of new experiences for those keen to get their travel fix.

"Discover Your Singapore Airlines" includes the opportunity to experience in-flight dining on the ground, thanks to a parked A380 superjumbo jet which has been turned into a restaurant.

Those who really miss airline food can even recreate the experience at home, thanks to the launch of [email protected], which allows people to order from 10 menus including First Class and Business Class meals served with wine or champagne, on limited edition dining-ware.

In November, travel fans will have the opportunity to attend a behind-the-scenes tour of SIA's training facilities too.

"The Discover Your Singapore Airlines experiences are the result of a market study and a comprehensive review conducted by SIA, which also took on board feedback from customers and members of the public," SIA told Insider in a statement.

"With the COVID-19 pandemic drastically reducing the number of flights operated by the SIA Group, we have created unique activities that would allow us to engage with our fans and customers during this time.

"These experiences offer something for everyone – from frequent flyers who miss our world-class in-cabin products and service, to couples and families who want an exclusive dining experience, and parents who are after an enjoyable activity-filled day with their children during the November school holidays.

"Factors such as the attractiveness of these initiatives to customers and members of the public, environmental implications, and the financial viability, were considered."

SIA isn't the only airline to have faced a backlash for creating no-destination flights.

In September, Australian airline Qantas released tickets for a seven-hour "flight to nowhere," and they sold out in just 10 minutes.

Tickets for the scenic flight, both taking off from and landing in Sydney, ranged from $575 to $2,765 depending on the class of ticket.

But campaigners were highly critical of the news.

"We're often told that we can't live without flights because of what they give us in terms of experiencing and understanding other places and cultures," Anna Hughes, director of Flight Free UK, told The Independent.

"But all these flights give us is a shedload of emissions — something we can well do without at this crucial time for the climate."