Australia's clean energy fund is being primed to pump up the Morrison government's plans for a gas-led economic recovery from the coronavirus pandemic, with proposed rule changes to fuel investment in gas power plants and infrastructure.

Energy and Emissions Reduction Minister Angus Taylor introduced a bill to Parliament on Thursday that would change laws that bar the Clean Energy Finance Corp from investing in fossil fuels and remove a rule that prevents it from investing in loss-making projects. 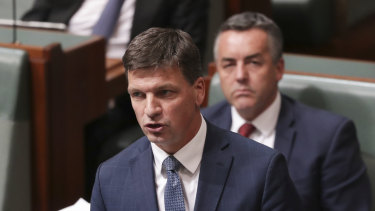 The proposed changes will apply to the CEFC's $1 billion Grid Reliability Fund, making it responsible for an underwriting scheme to encourage private companies to build new power supply.

Mr Taylor told Parliament the bill would "not divert the CEFC's existing $10 billion allocation" but would create a "trusted counter-party to investments, allowing the CEFC to support private sector involvement" in energy generation.

The underwriting program, which is open to all energy sources, is currently considering five gas, one coal and six renewable energy projects.

The CEFC is prevented from investing in fossil fuels and must invest at least 50 per cent of its funds in renewable energy. Mr Taylor's bill would remove these restrictions for the $1 billion in the Grid Reliability Fund.

Independent MP Zali Steggall asked during question time on Thursday if the government would "commit to a clean recovery", arguing renewables delivered more than twice the number of jobs as coal or gas investment.

Mr Taylor said more gas power generation was a necessary back-up supply for the energy grid, which had seen record levels of renewable investment in recent years. Affordable gas and electricity supply was "crucial" for manufacturing in particular.

Labor's climate change and energy spokesman, Mark Butler, said the Opposition was considering the proposed changes but criticised the government for its track record.

"We are conscious the government has form on trying to abolish and undermine the CEFC on a number of occasions over the last seven years," Mr Butler said.

Richie Merzian, the climate and energy spokesman for left-leaning think tank the Australia Institute, said Mr Taylor's bill revealed the government's ideological preference for gas over renewables by "changing CEFC from an explicitly profit-making investor of renewable energy projects for the Australian people, to a potentially loss-making underwriter of fossil fuel projects".

"These amendments pave the way for dud taxpayer investments in gas power generation," he said.

Chief scientist Alan Finkel this week defended criticism of his advice to government that natural gas would remain an important energy source in the medium term.

The $10 billion CEFC was founded by the Gillard government in 2012 with a legally binding investment mandate to promote renewables, low emission technology and energy efficiency.

In the past financial year, it received a record $942 million through repayments, sales and redemptions and made investment commitments of more than $1 billion into 23 clean energy investments.

CEFC chief executive Ian Learmonth said this year the agency's focus would be dominated by hydrogen projects under a new $300 million fund to promote the nascent technology.

Get our Coronavirus Update newsletter for the day’s crucial developments at a glance, the numbers you need to know and what our readers are saying. Sign up to The Sydney Morning Herald’s newsletter here and The Age’s here.