“I didn’t really know why [Farrah] was like here,” said Amber, who added, “But everybody deserved to be there.”

“Teen Mom Family Reunion” is like an Avengers event for Teen Mom fans — and with some of the stars from all around the franchise meeting up in person for the first time, there were fireworks to be had.

Premiering Tuesday night on MTV, “Teen Mom Family Vacation” reunites “Teen Mom OG” stars Amber Portwood, Maci Bookout and Cheyenne Floyd with “Teen Mom 2” stars Leah Messer, Jade Cline, Briana DeJesus and Ashley Jones for one helluva trip to San Diego, California. While she doesn’t appear in the premiere, Farrah Abraham will also be popping up to surprise the ladies — some of whom she’s really gotten into it with in the past. 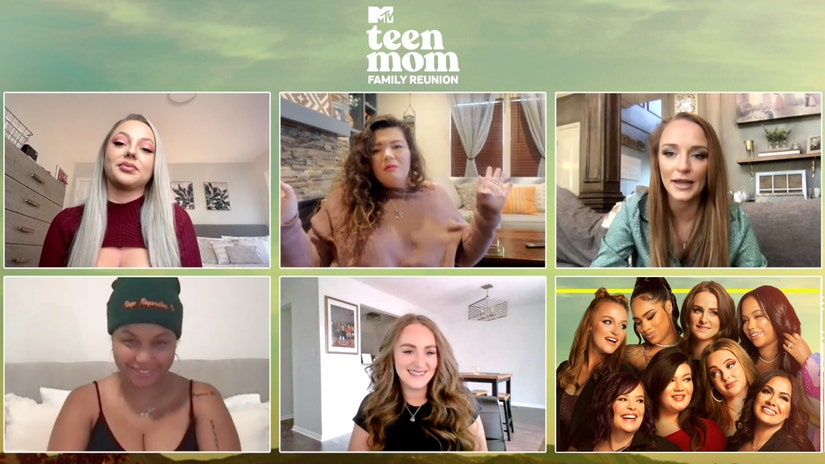 It doesn’t take long for some serious drama to go down, but all the young women involved went into the show 1.) Not knowing who else would be there, 2.) Hoping to get some resolution on issues they may have with any frenemies who did show and 3.) Just having a good time after getting past said drama.

“I think I was nervous about the whole thing,” said Cheyenne, who came up with the vacation idea with Maci, before leaving the casting up to MTV. “Everyone has such big personalities and I had never met anybody from ‘Teen Mom 2,’ I didn’t know what they thought about me. I was nervous to meet everyone, I wanted to get along with everyone and I didn’t know all the dynamics between everyone, so there were a lot of moments where I just sipped my wine. But I honestly felt like I was watching TV doing it, it was so much fun.”

While Portwood has had some volatile moments on “Teen Mom OG,” some as recent as this past reunion, she said she signed on in a better — and less confrontational — headspace than she’s been in previously.

“Today, I’m more relaxed, more zen, it didn’t matter who came in, whatever new was thrown at me because I knew that I could control myself better,” said Portwood, who promised there were still “so many kind of insane things that happened” during filming.

“When I knew that somebody was coming in, I’d be like, ‘Oh, okay,’ I didn’t really quite understand why this person’s right here but that’s okay, I’m just going to relax and it was pretty good though,” she continued. “I think the majority of us — I think all of us by the end — I feel like we are still connected. I know that I am with all the girls and I’m pretty sure they are too. it was a great experience. It also was, I guess for you guys [the viewers], it’s gonna be entertaining, because you got a lot of really big personalities in there. Be ready for it, though, honestly.”

One of the first explosive moments of the season actually happens the very first night, as simmering tension between Jade, Briana and Ashley comes to a head. Security is called to break them all apart, after Jade and Briana confront Ash for talking smack about them on social media, while being “fake” to them in person in San Diego. The confrontation comes thanks to a life coach’s drill for all the girls, a drill which was meant to get all their frustrations with each other out in the open so they could tackle them head on.

“Surprise! I honestly was going, ‘Ooo, it’s about to be juicy’ and then come to find out it’s me getting it juicy on the first night,” Cline told TooFab. “I think there was a lot of stuff that had really been unsaid. I’m not an Internet person, I’m not going to go on the Internet and argue with you and go back and forth. I’m more like I want to see you in person, let’s talk about all this stuff in person instead of going back and forth on the internet or on your phones.”

“On the internet, I feel like it’s so much drama and then other people get involved and I feel like there was a lot of thing that happened and I’m glad now that everything got out and everything got more resolved,” she said of the heated moment in the premiere. “I think it was just a lot of different, I don’t know, there was so much going on. I was in a really good headspace going into it and I think there were a lot of things that were on my mind and I think on a lot of other people’s too.”

For Jade, she said a lot of her issues with Ash stemmed from the fact that the two haven’t seen each other in person for years now, thanks to Covid. “The last interpretation we had of each other was what we’d seen of each other when we were younger,” she added — saying the two had “grown so much” in the time between that they were able to come to some resolution and move forward. “We come to realize me and her are more alike than we realized,” she added.

Noting all the “different personalities” on the show, Jade also said she knew it wasn’t going to be “rainbows and butterflies” the whole time and expected “weird, awkward times” as well — something Maci was excited to try and get out of the way right off the bat.

“I was actually really glad that all of s— came out in the beginning because if there’s one thing about every one of us, we’re not fake at all and I don’t like passive aggressive stuff like that. It just makes everybody feel uncomfortable,” said Bookout. “I was glad that, alright, let’s just lay it all down there and we can sort through it as we go type of thing.”

“By the end of the trip, we learned so much about each other and understood each other so much that if one of us, if people weren’t getting along or somebody got their feelings hurt, we knew how to communicate with each other,” she added. “I think the respect was built for each other so much that it wasn’t going to be ugly or fake or disrespectful. It was like, ‘No, we’re grown women, I love you, you’re my sister, but you pissed me off, let’s talk about it.’ I was glad it got out on the first day.”

Of course, with Farrah showing up at some point, don’t expect that tranquility to last. She’s seen stirring the pot in the trailer and, according to Amber, she’s not the only unexpected surprise from production.

“I sat down with her the first night when she first came in. I didn’t really know why she was like here, but it was okay,” said Portwood, who has had some explosive moments with Farrah in the past. “We had got done with a really nice toast together — of course mine was lemonade — and all of a sudden it’s just like a little bit of a surprise. But I got to sit down with her and chillax and talk for a minute.”

“I hope I’m not giving too much away. It didn’t matter anyway, because there was still drama,” she added. “But there were so many other people … they would just throw people at us whenever they felt like it! it could be 11:30 at night or 2 in the afternoon. It was fun though. It was kind of like, no hard feelings because like Maci said, everybody deserved to be there in some way.”

“If you brought drama, okay, whatever, we can bring the drama too. We always do. But everybody deserved to be there,” she added. “Everybody deserved to have some sort of voice. Whatever happened happened and you guys are just gonna have to watch. This will be the first time I’m going to watch the show, seriously!”

Cheyenne added she’s “never been this excited” to watch the show either — while Leah said that because this venture was “different” from “Teen Mom 2,” she was really looking forward to it too. The change in format, however, was hard for Maci to shake off when she returned home.

“When y’all came home, were you all like me, literally thinking you have to take a mic off before you get in the shower?” she asked the group. “You can only get all the way naked in the bathroom with the doors shut because cameras are everywhere. I literally had like PTSD from filming like that, that was crazy. Way different!”