The aspiring chef who will never eat again: Woman, 29, is unable to consume as much as a ‘drop of water’ due to Ehlers-Danlos syndrome which left her crippled with pain and forced her to drop out of culinary school

A woman with Ehlers-Danlos syndrome who needs to be hooked up to a feeding tube for 18 hours a day has revealed she will never be able to eat again – with even the smallest sip of water causing her agonising pain and nausea.

Loretta Harmes, 29, from Poole, had hoped to become a chef but was forced to drop out of her course when she began experiencing symptoms at the age of 19 and could barely get out of bed.

Ehlers-Danlos syndrome (EDS) is the name for a group of rare inherited conditions that affect the connective tissue. In Loretta’s case it affects her digestive system.

Her weight dropped to just 4st and she attempted suicide several times but it was four years before she was officially diagnosed.

The passionate chef says despite not being able to eat food, she is still determined to pursue a career in food, telling BBC: ‘The reason I don’t go stir-crazy over not being able to eat is because I’m so relieved to be free from the pain after so many years… Cooking is a creative outlet for me.’ 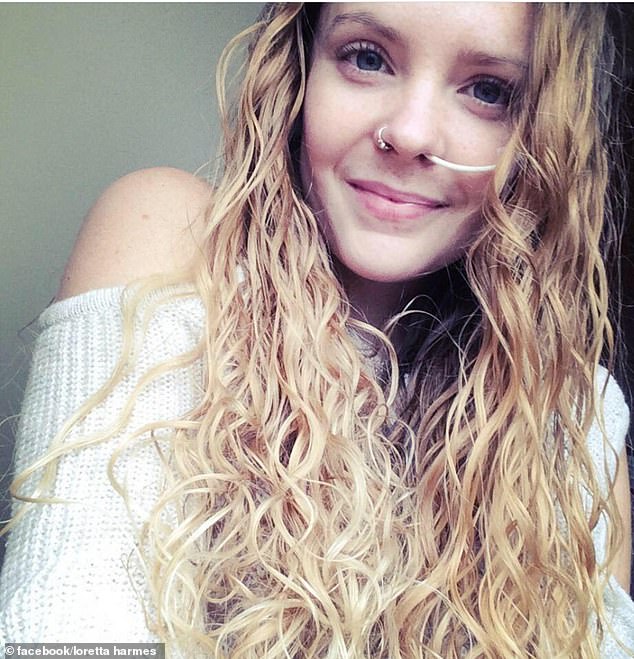 Loretta Harmes, 29, from Poole, has  Ehlers-Danlos syndrome and needs to be hooked up to a feeding tube for 18 hours a day 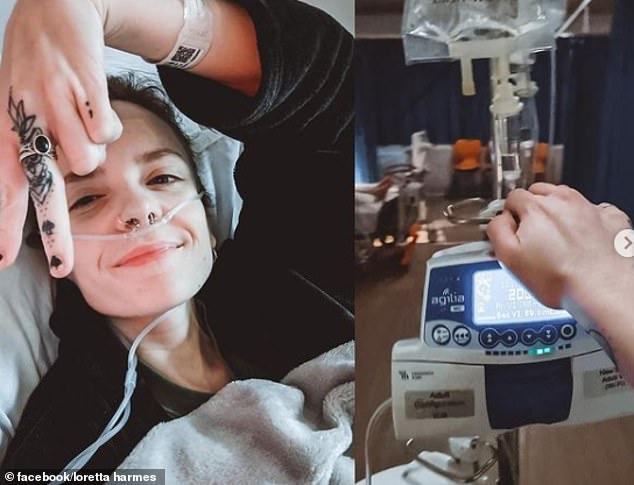 Loretta’s passion for cooking goes back to childhood, when she would join her grandmother Mavis in the kitchen to replicate meals from Ready Steady Cook.

Every Thursday, her family would go to Mavis’ house for a meal, dining on roast dinners and raspberry mousse.

By 11, she was cooking dinner for her family every week while her mother, who was a hairdresser, worked late.

She started by replicating her mum’s tomato pasta bakes, before taking on pies and stews. 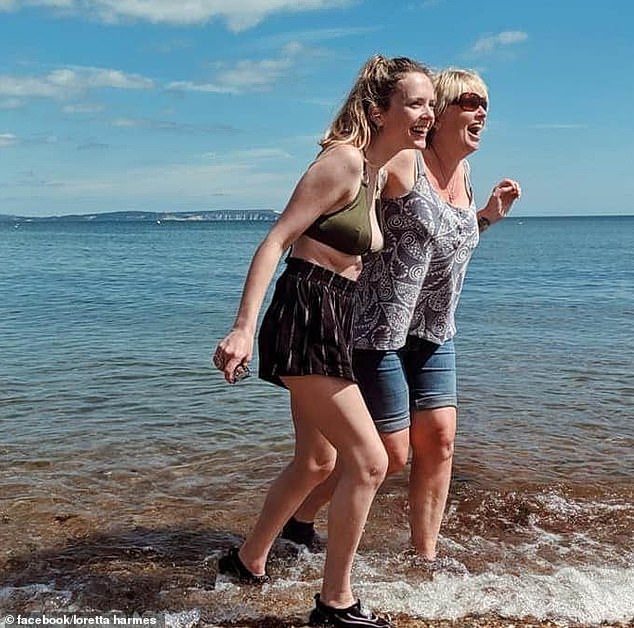 What is Ehlers-Danlos syndrome?

Ehlers-Danlos syndrome (EDS) is the name for a group of rare inherited conditions that affect the connective tissue.

Different types of EDS are caused by faults in certain genes that make connective tissue weaker.

Depending on the type of EDS, the faulty gene may have been inherited from one parent, or both.

EDS can affect people in different ways. For some the condition is relatively mild, while for others their symptoms can be disabling.

Some of the rare severe types can even be life-threatening.

As she grew older, her passion for cooking grew and in secondary school she won cookery competitions and even made regional heats.

When she was 15, Loretta had anorexia, which she estimates lasted less than 12 months.

At the end of school she was awarded a place at a top culinary arts college in London, and dreamed of following in the footsteps of TV chefs like Jamie Oliver and Ainsley Harriott.

But she only managed to complete one year of the three-year course because of her health and, at just 19, she found she was bed-bound with pain.

She explained: ‘Things went downhill dramatically – I couldn’t eat or go to the toilet at all, and then the next five years became a nightmare I couldn’t wake up from.’

Doctors became convinced her rapid weight loss and discomfort around eating was caused by the return of her anorexia, and she spent the next two years in eating disorder units.

Her weight dropped to just 4st, and she was sectioned under the Mental Health Act three times, for a total of 18 months, to stop her leaving.

When she complained of having bowel and stomach difficulties ‘delusional psychosis’ was added to her medical notes.

Feeling hopeless that she wasn’t receiving any help for her pain, she attempted suicide several times.

When Loretta was 23, she and her mother Julie visited a bowel consultant, who wanted to understand why Loretta was in such agony after eating.

She travelled to St Mark’s Hospital in London and was diagnosed with Ehlers-Danlos Syndrome (hEDS). 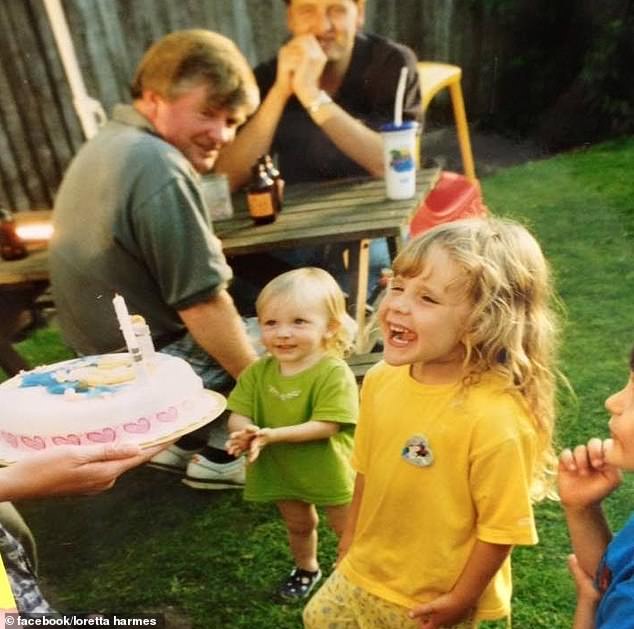 Loretta’s passion for cooking goes back to childhood, when she would join her grandmother Mavis in the kitchen to replicate meals from Ready Steady Cook (pictured, as a youngster

The test showed Loretta’s stomach was partially paralysed and couldn’t empty itself properly.

Her other symptoms include migraines, fatigue, a racing heart when she stands up or sits down and a neck pain she will eventually need surgery for.

Six years on, she  is now hooked up to a feeding tube called a total parenteral nutrition (TPN) for 18 hours of the day, which bypasses the digestive system and infuses directly into the bloodstream.

Meanwhile she also has a Hickman line going through her chest and into a large vein that drains into her heart. 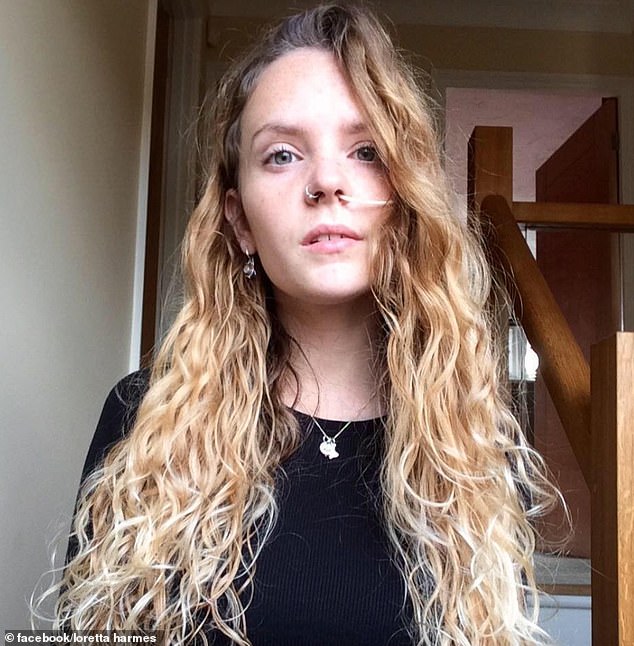 Despite the challenges that come with having a feeding tube, Loretta feels it has given her ‘energy’ and she can now ‘wear normal clothes again’

Even a speck of dust can cause contamination on the line, and several times Loretta has had to fight for her life after contracting sepsis.

Despite that, she feels her feeding tube has given her ‘energy’ and she can now ‘wear normal clothes again’.

The improvement to her health also revived her interest and passion for cooking, despite the fact that she is unable to actually eat the food.

She said she spends lots of time methodically planning and prepping meals, and relies on her ‘eyes, nose and gut instinct’ to help her craft a tasty dish. 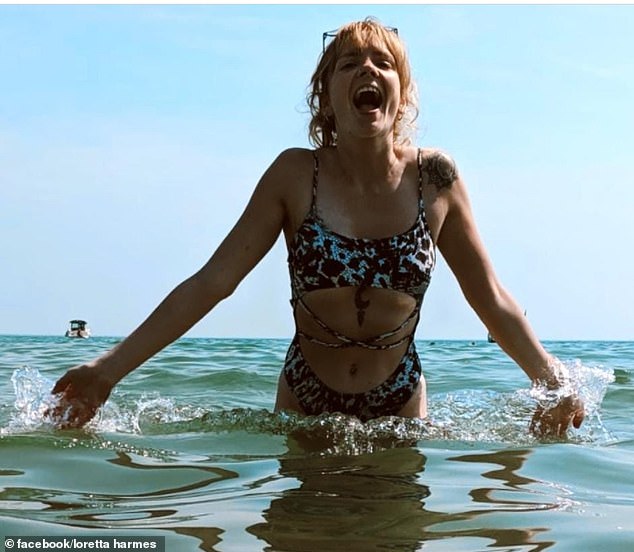 The 29-year-old is determined to live life to the full, and her feeding tube has revived her excitement about cooking 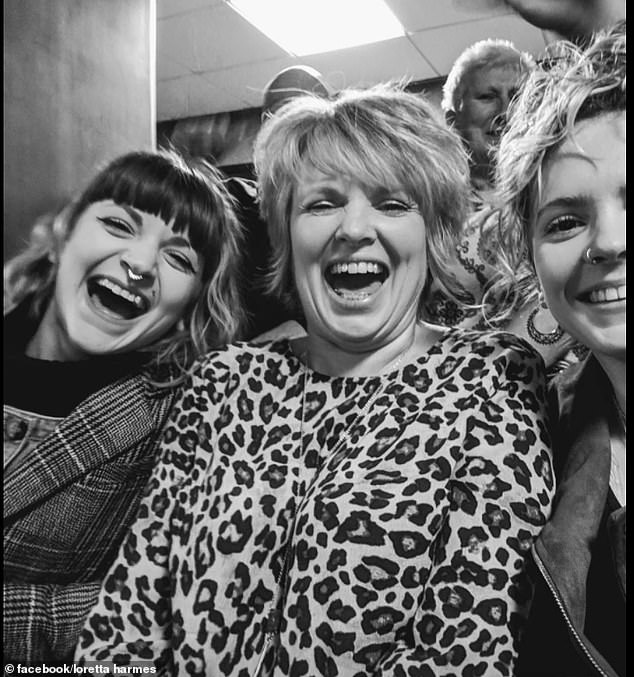 Two years ago, the family were struck by further heartbreak when Loretta’s sister Abbie, then 23, was killed in a car crash after visiting her in hospital (pictured together)

And while some people with a feeding tube will chew food and spit it out to taste flavours, she has never been drawn to the habit.

Two years ago, the family were struck by further heartbreak when Loretta’s sister Abbie, then 23, was killed in a car crash after visiting her in hospital.

But Loretta insisted she is going to keep on living and creating new recipes in her sister’s memory, saying: ‘She made so much difference to the lives of others and her own life was just beginning to blossom.’