The loneliness of having NO ONE who needs you: No children to bring up. No parents to care for… thought the ‘sandwich generation’ of women had it hard? The alternative is just as tough

We’ve all heard of the Sandwich Generation — those women in their 50s worn down by the pressures of having dependent children while also caring for elderly parents. It’s a difficult position to be in, as anyone living it will attest.

But, recently, I received a message from a woman whose situation is the precise opposite. And yet her burden seems so much heavier.

Cathy is both childless and parentless. She describes a nebulous sense of passing through life untethered — with nothing to properly connect her to the Earth. ‘I’ll never have children now, and with my parents gone, I am without roots,’ she writes. ‘It’s almost as though I could float up from the ground and disappear. Some days I feel that, if I did, then nobody would notice.’

Cathy, who is 54 and single, explains that this crisis was triggered at her great-niece’s christening. Overwhelmed by memories of her mother’s funeral, at the same church last summer, she stepped outside to compose herself and to visit her parents’ grave. 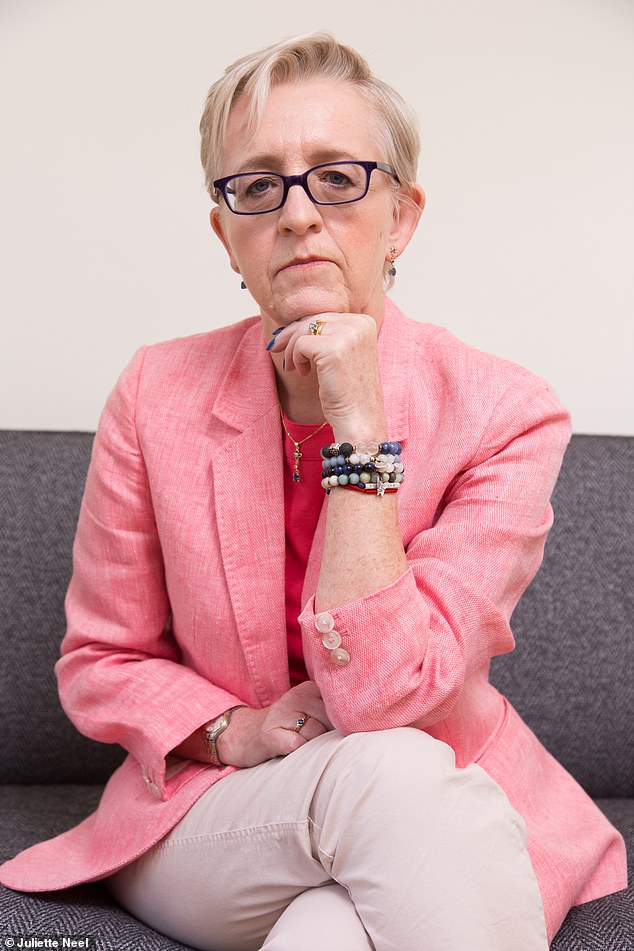 Psychotherapist Jody Day, spoke to women whose bloodline have been cut off from above and below them, including Lesley Pyne (pictured), 57, who struggles with the fact that her parents died without her being able to give them grandchildren

As she wandered through the pretty churchyard, she inadvertently began reading the inscriptions that marked where other people’s loved ones lay.

‘What a mistake that was,’ she tells me. ‘One epitaph after another paid tribute to loving mothers and dearly missed grandparents.

‘I found myself comparing the graves that were cared for with those that were overgrown, and a terrible sadness came over me.’

Since then, Cathy, a medical secretary, has been tormenting herself with the same soul-destroying question: ‘Who will tend my grave when I’m gone?’

She says she feels the agony of being a childless orphan — albeit a middle-aged one — more keenly than ever. ‘I don’t know what I’m supposed to do with myself,’ she says. ‘When Mum was alive, I’d help with her shopping and cleaning. When she became ill with cancer, there were hospital appointments and lots of stuff to manage at home.’

All this gave Cathy a sense of purpose outside of her full-time job. ‘Now Mum’s gone and there’s nothing left for me to do,’ she says. She finds herself grieving for her parents while mourning her dreams of having a family, which didn’t happen because she never met the right person.

Meanwhile, her friends and colleagues complain of being run ragged by recalcitrant teenagers and increasingly dependent elders. ‘I listen,’ says Cathy. ‘I nod my head, but I’m unable to relate. Their stresses leave me wondering: “What’s the point of me?” ’

What desperately sad words. And, as I told her in my reply, she is not alone in feeling like this.

Time and again, I speak to women who would give anything to be stuck in the familial responsibilities that burden their Sandwich Generation counterparts. 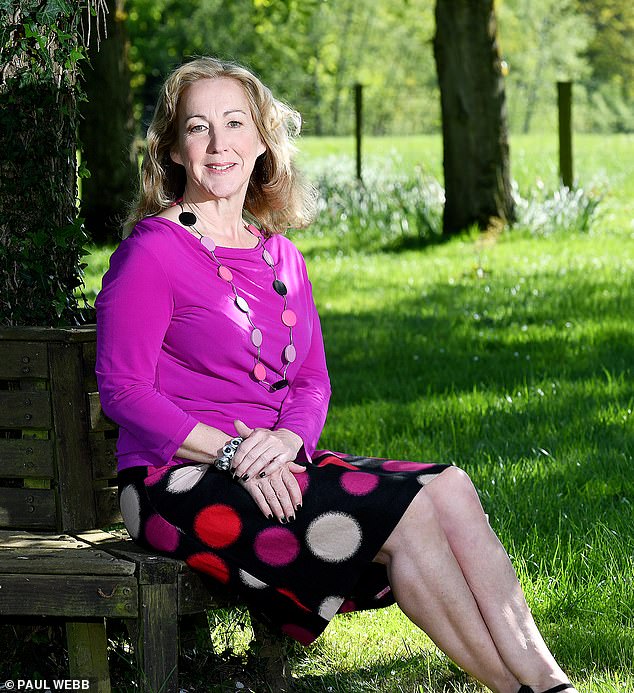 Ann Morgan (pictured), 56, from Kent, revealed that she still cries out for her parents and catches her breath every time she holds a newborn baby

Instead, they feel horribly out of step with their peers: alone, untethered and lost.

It’s such a basic human instinct to want to be part of an on-going family chain — but these women feel themselves to be the Solo Generation, their bloodline cut off both above and below them.

Cathy’s grief is what psychologists call ‘disenfranchised’ — that means it isn’t particularly acknowledged by society. This is because her circumstances can be misinterpreted as a dream ticket of sorts, especially in our freedom-focused modern world.

Some assume women like Cathy are lucky to be utterly unencumbered, while still young enough to enjoy the liberty that brings.

But that’s losing sight of just how much a woman’s identity is tied up with caring roles.

I appreciate that might sound a little trite, or even an old-fashioned view of womanhood in the 21st century. But, as a psychotherapist, I recognise it as an intrinsic element of most women’s psyche, and a deep-rooted, if subconscious, societal belief.

And thus, if you’re a woman who has neither children nor ageing parents depending on you, then whatever else you do with yourself is seen as being ‘less than’. Having a husband doesn’t make you immune to that, since they don’t usually need your care in the same way.

It means that, no matter what a woman does with her life, she is still somehow defined by her parental status more than her accomplishments. Haven’t we all read the plaudits about an impressive professional woman that start by pointing out how many children she has? 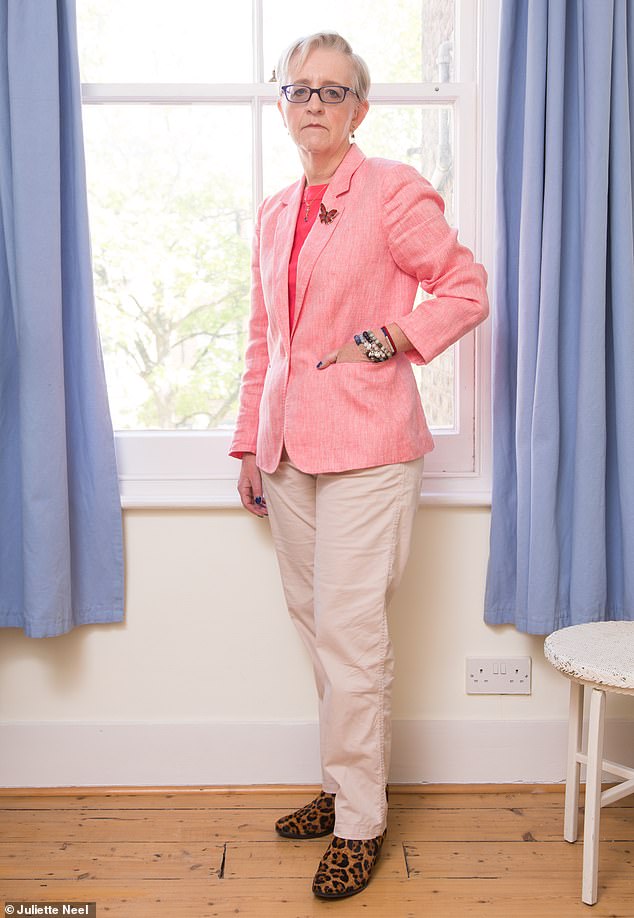 Lesley (pictured) who is the author of Finding Joy Beyond Childlessness, endured six rounds of IVF in the hopes of having a child

Elizabeth, a 51-year-old radio producer, who is childless due to her husband’s infertility issues, say: ‘We coped relatively well as a couple, up until my late 40s when my parents died within a year of each other,’ she explains.

‘Since then, I’ve carried a deep sense of sadness that I no longer have blood relatives to share my life with. I’m an only child, so there aren’t nieces or nephews.

‘By the time I hit my 50s, I expected to have more in common with my peers, because their children would have grown up. But all the talk has moved on to grandkids, or what it’s like to have an ailing parent. I can’t join in and say: “I know what you mean,” because, the truth is, I don’t.’

Side-stepping the Sandwich Generation is far from rosy. As tough as it is being pulled between children and parents, not feeling needed can be incredibly hard for women, too.

As the founder of the childless women’s network Gateway Women, I have worked with thousands of women coming to terms with the heartbreak of not becoming mothers. Through our workshops, and private meet-ups we host, I’ve been privy to countless stories of the grief that goes hand-in-hand with childlessness.

For many of us, not being heard is incredibly difficult to deal with. If women express their sorrow at not having children, they’re met with platitudes — we call them ‘bingos’, as they’re so common. ‘Well, at least you’ve been spared the pain of parenthood’, is a frequent one we hear.

Similarly, trying to explain to someone exhausted by the demands of their elderly mother, how you desperately miss being needed by your own is likely to fall on deaf ears. No wonder women like Cathy and Elizabeth feel that they don’t have a voice.

Lesley Pyne, 57, is the author of Finding Joy Beyond Childlessness, and says that, alongside her grief, she’s also had to come to terms with complicated feelings of guilt and even shame.

‘I’m an only child,’ she explains. ‘And so I struggle with the fact that my parents died without me making them grandparents. Dad, especially, loved babies and, until I realised I couldn’t have children, I would watch him playing with my cousins’ little ones and really look forward to the day he’d do the same with mine. 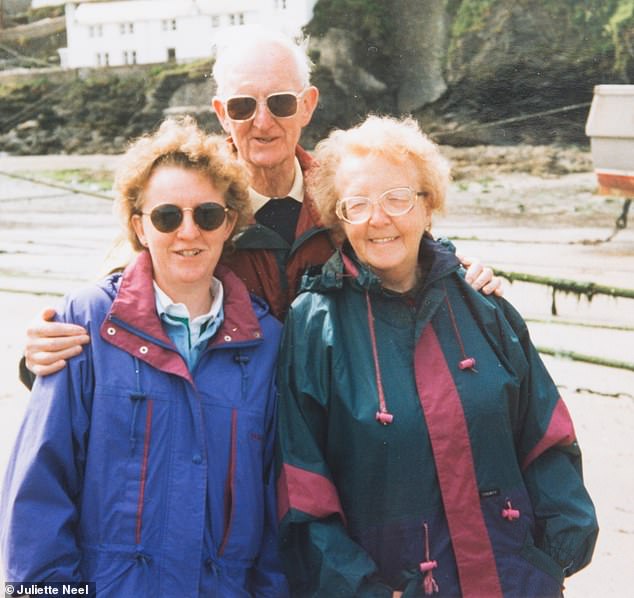 Lesley (pictured with her parents in 1995) revealed that she began spilling out her emotions after her dad passed away, she’s spent many hours in therapy

‘Even though I know it’s not my fault — having endured six rounds of IVF, I couldn’t have tried any harder for a baby — it’s taken many hours of therapy and buckets of tears for me to work through the fact he didn’t get to be a grandfather.’

‘When we lost Mum, I remember that Dad didn’t cry, and so I followed his example, holding back my own tears and carrying my grief deep inside of me. I put that pain in the same box that held my sense of loss over not having had children.

‘When Dad passed away, all the feelings I’d internalised began spilling out, and the pain of childlessness seemed to intensify.

‘At first, I couldn’t articulate how it felt to be orphaned, and not to have children to give a sense of a continuation of life. But therapy has helped — more than I ever imagined it would.

‘It can often feel like I’m a rudderless ship bobbing up and down on the ocean, at the mercy of the waves.

‘My husband is a wonderful man and we have a great life together. But, even so, there’s a sense of loneliness that I’m still coming to terms with,’ says Lesley, from London, whose husband Roger, 59, is in property management.

‘I’m working hard at finding a way to keep myself anchored without my parents. Acknowledging my pain and talking to women in the same situation is how move forward.’

Lesley finds solace in communities of similar women online. It was through one such network, More To Life, which is part of Fertility Network UK, that she met Ann Morgan, 56, from Kent. Despite eight years of fertility treatments, Ann miscarried her only resulting pregnancy. 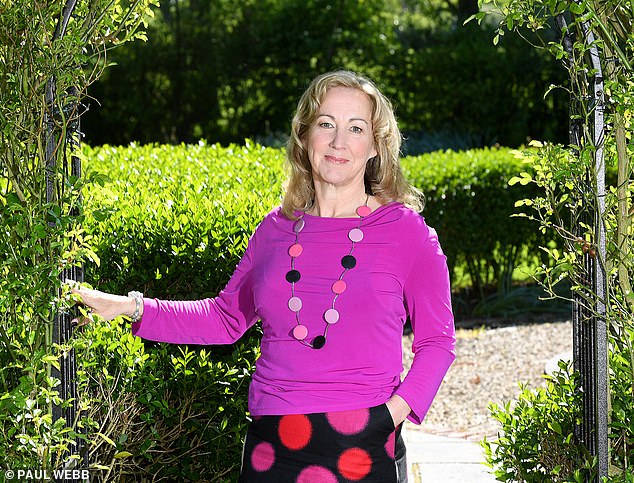 Ann (pictured) and her husband make the most out of their opportunities to travel, socialise and pursue hobbies

‘Lesley understands how infertility, combined with the loss of your parents, is incredibly hard, in a way that only someone who is also living this life can,’ says Ann, a semi-retired education consultant.’

‘Like her, I find not having my parents around the hardest thing. My mum died in 2016 — three years after my father — and, even now, I still cry out for them when I feel overwhelmed. Just as I still catch my breath every time I hold a newborn baby in my arms.

‘But I also embrace my life as it is, as opposed to what I can’t help but wish it could have been — surrounded by children, grandchildren, perhaps, and, of course, my wonderful, dearly missed parents.

‘My husband and I travel and make the most of the opportunities we have for hobbies and socialising. We immerse ourselves in enjoying those things, acknowledging they wouldn’t be possible if we were sandwiched between the needs of children and parents. And that helps.

‘That’s not to say that I wouldn’t give anything and everything for just one more hug from my parents, or the chance to hold a child of my own. But I know that, if they were still here, they’d tell me to work hard at being happy, in spite of my situation.’

Jody Day is the author of Living The Life Unexpected and is founder of Gateway Women: gateway-women.com