Rihanna stans, you’ve been waiting for this moment for a year which, in Rihanna time, really isn’t all that long — but that doesn’t change the excitement. Savage X Fenty’s Vol. 2 show is dropping on Amazon Prime on Oct. 2, and there’s so much to look forward to. Not only will the show feature a ton of amazing music acts, hot new lingerie, and flashing lights like you’ve never seen, Savage x Fenty boasts a wildly star-studded cast. You’ll get to see all your favorite celebs, from Willow Smith to Lizzo to Normani to Paris Hilton, all supporting the queen herself, Rihanna, in size-inclusive lingerie you’ll be dying to buy.

The 2019 Savage X Fenty show was already a life-altering experience, but this year’s event is, somehow, even better — other-worldly almost. It’s so much more than just a runway show. Parris Goebel opens the show to a spoken word passage with pointed dances moves before Cara Delevingne struts down the runway in a chained black bra and bottoms, complete with a bleach-blonde mullet. She’s followed by the first musical act Rosalía, who rocks a robe that just touches the ground; sheer, bedazzled, lace bike shorts; a matching bra; some impressive, gem-covered nails; and two diamond-encrusted cross necklaces. 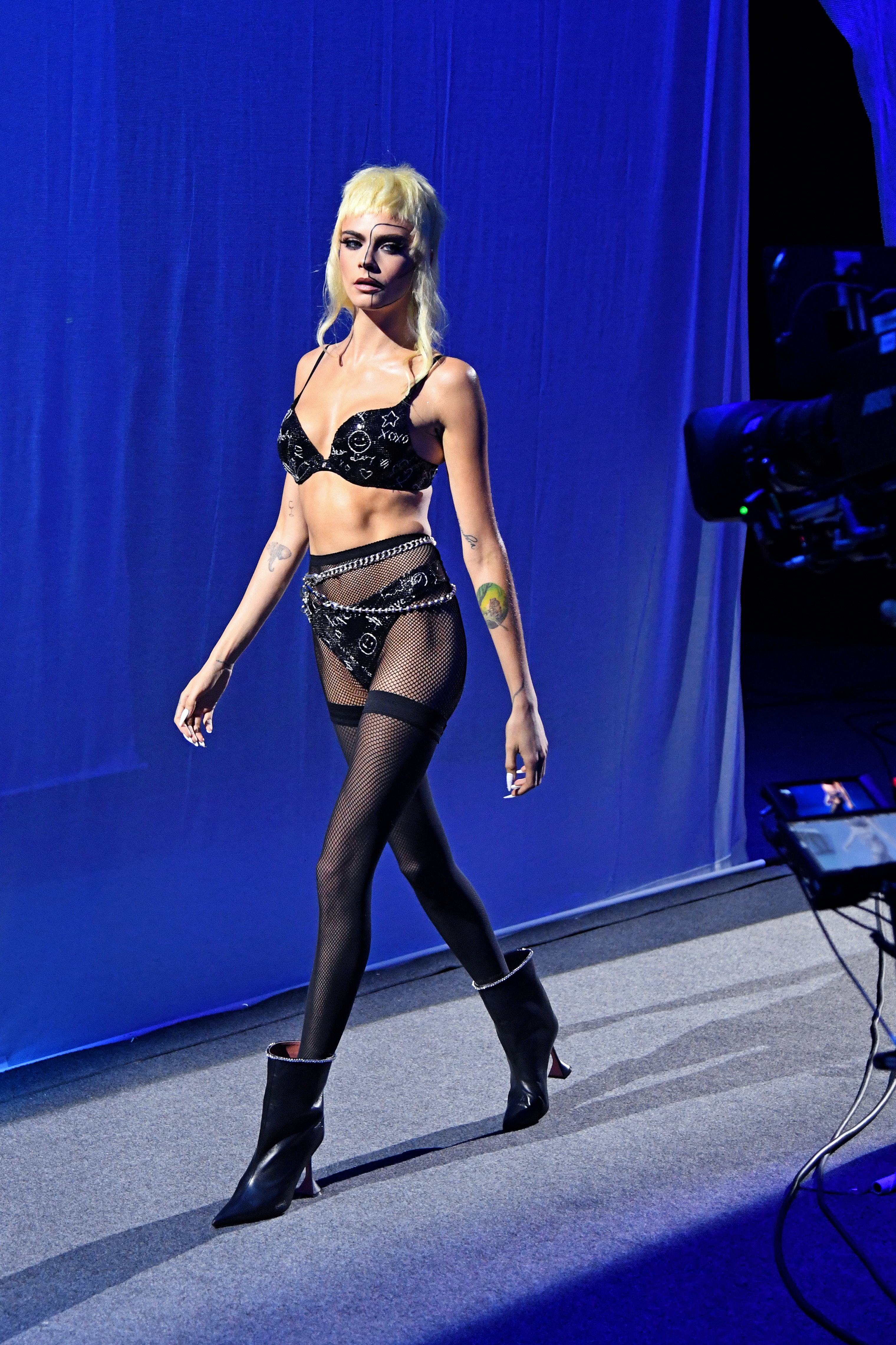 This opening sequence is followed by an interlude where Delevingne, Rihanna, Normani, Erika Jayne, and Jazzelle talk about childhood diaries (don’t go in the diary); viewers get a glimpse at what went into making this innovative, new line. "Inspiration can come from anything. What makes it unique is your own interpretation on that message," Rihanna says. "Everything I do is going to be personal to me, when it comes to Savage especially."

The next celebrity entrance is from Indya Moore in a sultry black lace bodysuit and fishnets. For her second Savage X Fenty show, Bella Hadid lays on a couch in an all-black, two-piece lingerie set with a beehive-style hairdo and thigh-high latex. On the other side of the couch is a stunning Demi Moore wearing a black teddy and all the crystal-studded jewelry any person could ever want. 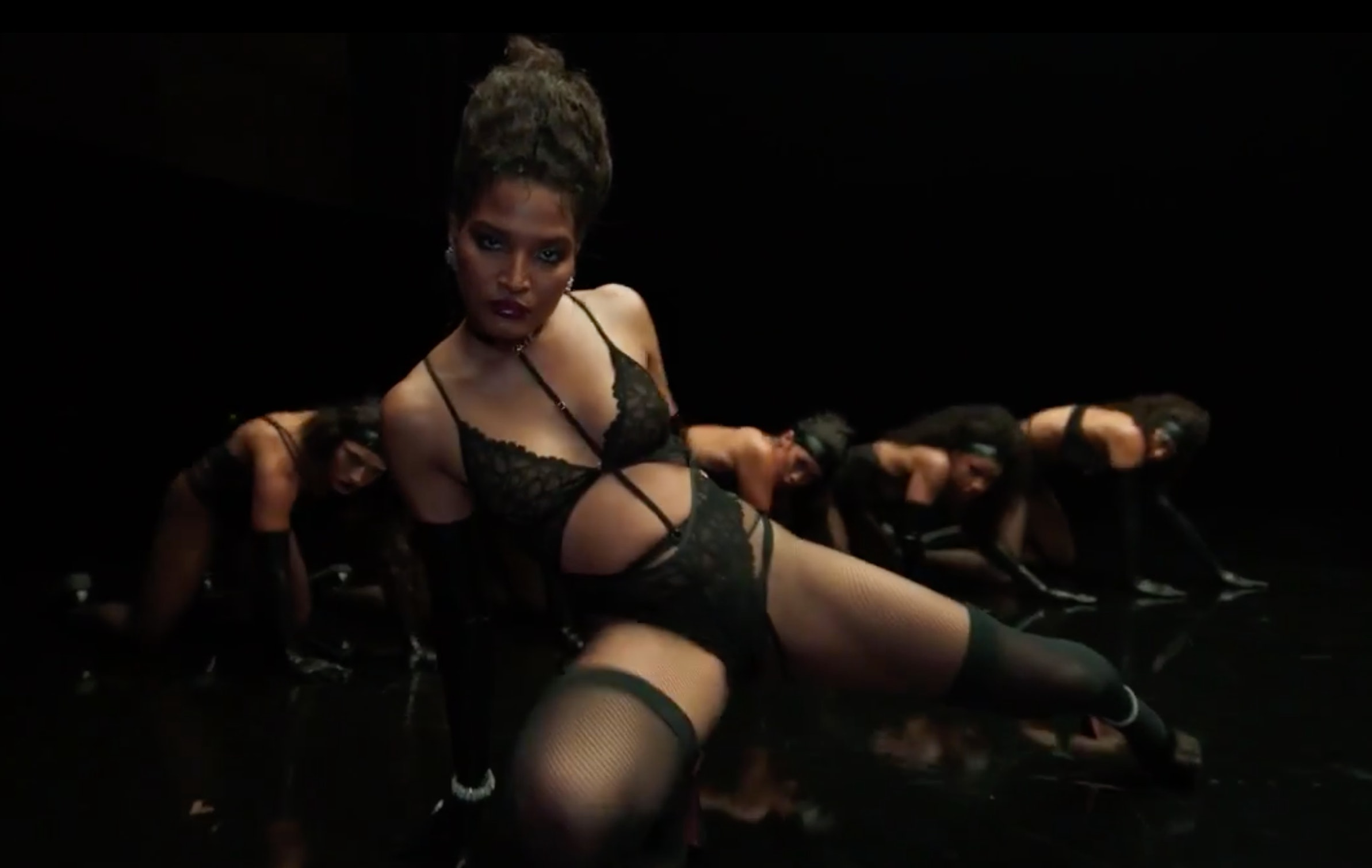 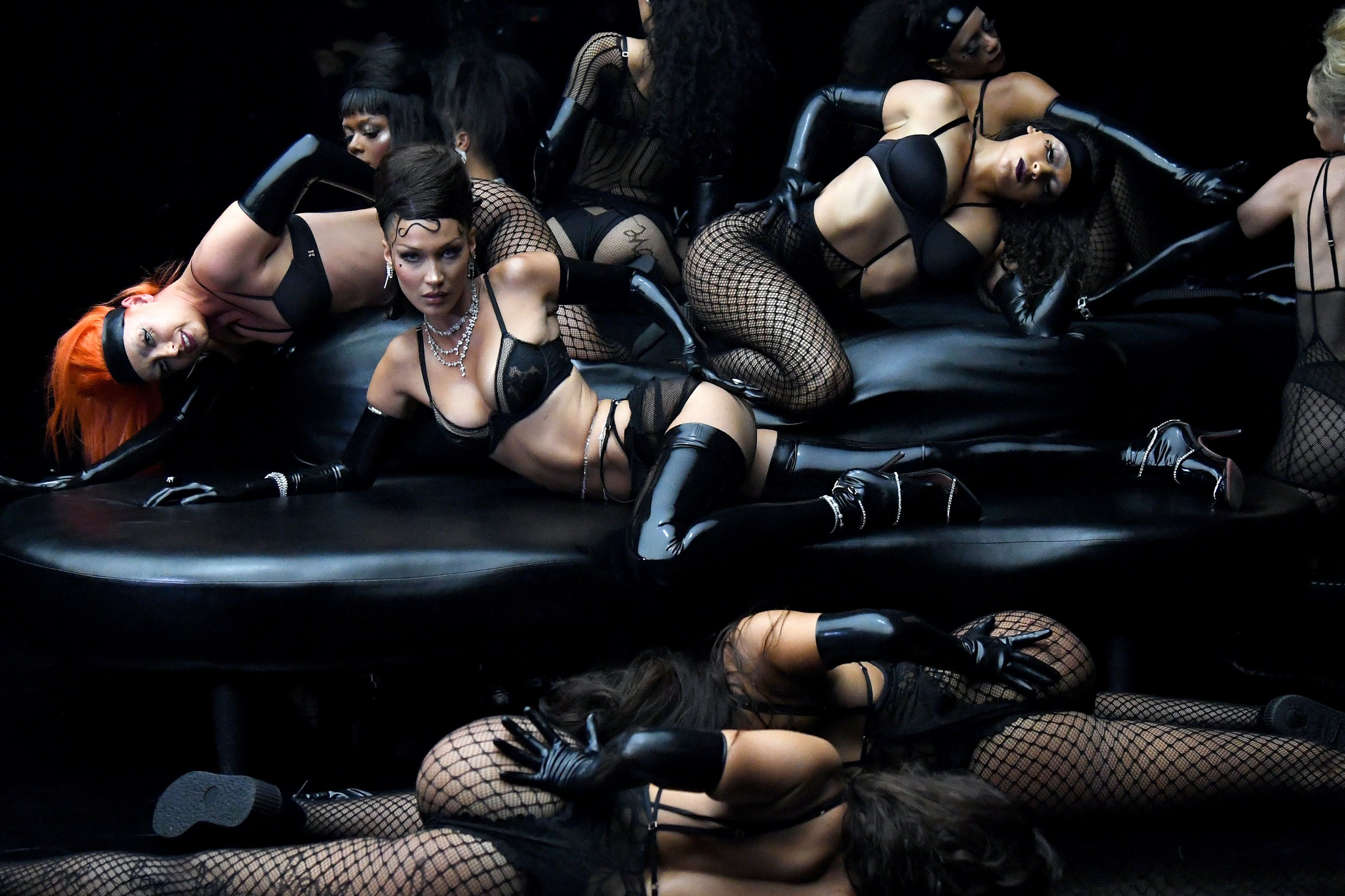 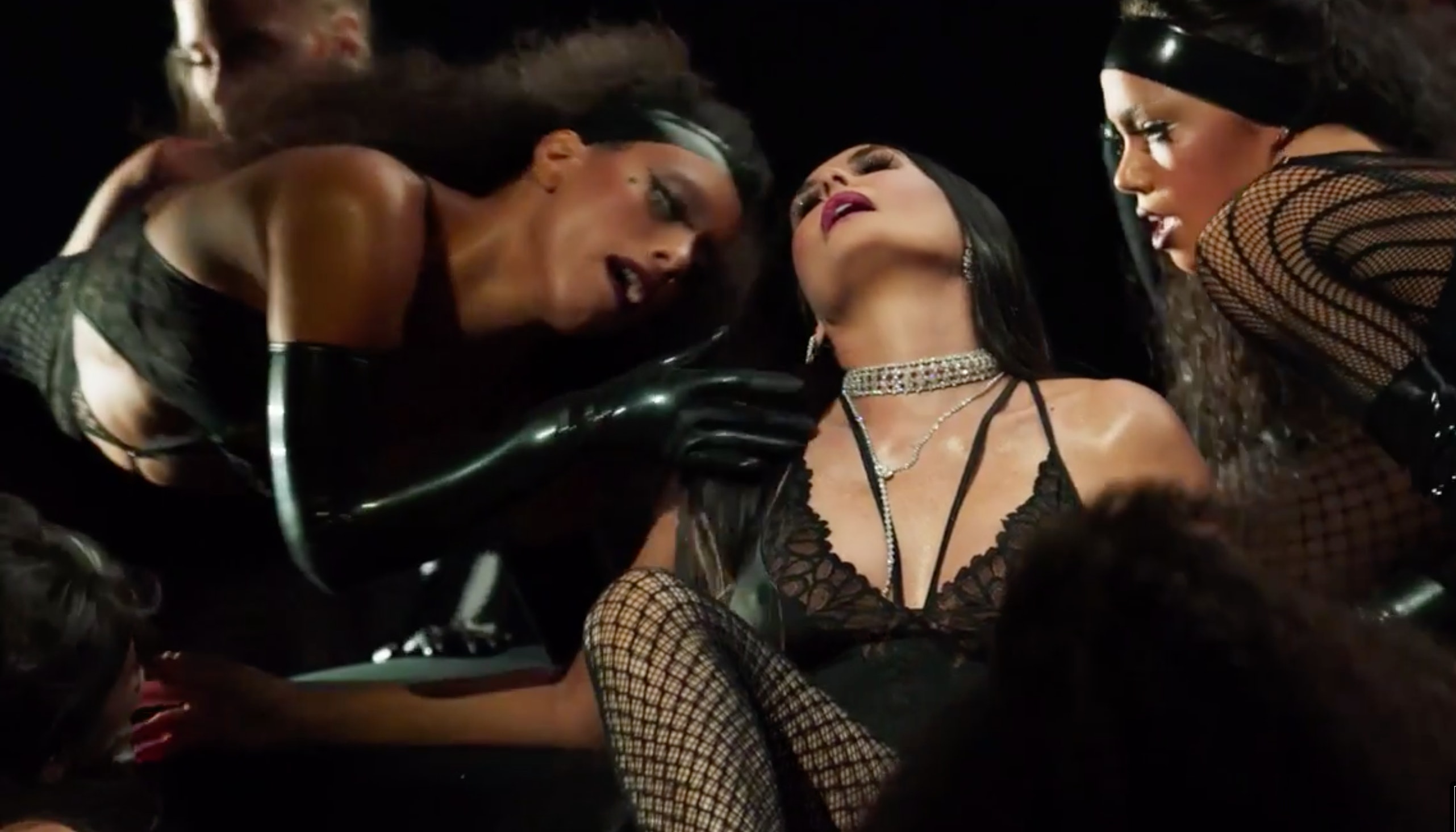 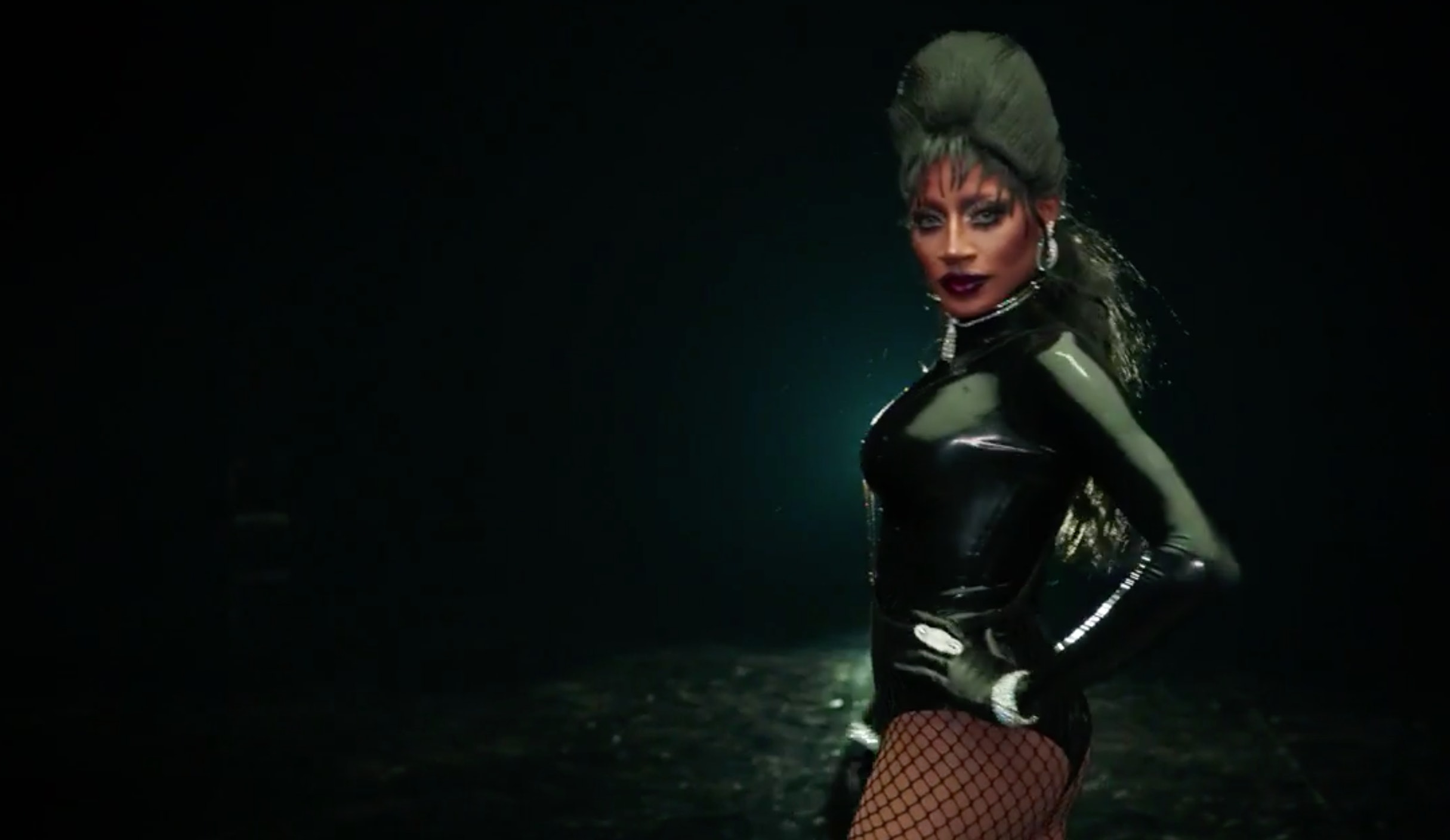 In a shiny, vinyl one piece, Jada Essence Hall appears serving so much attitude. Showing off Savage X Fenty’s first men’s capsule collection, Big Sean walks out surrounded by dancers. Then, Normani absolutely eats up the runway in an all-white, bridal ensemble that includes a veil, a mini skirt, thigh-high stockings, and a garter belt.

Introducing the next two music acts is Mustard. Ella Mai comes out in a trailing robe for a gorgeous performance of "Not Another Love Song," followed by Roddy Rich singing "Ballin" and "High Fashion." Viewers also get to see an unbelievably gorgeous Shea Couleé putting on her drag makeup with Fenty Beauty. In an interlude about fashion, Rico Nasty, Willow Smith, Ciadra Hall, Precious Lee, Miguel and Soo Jong Park talk about what fashion means to them and Rihanna. 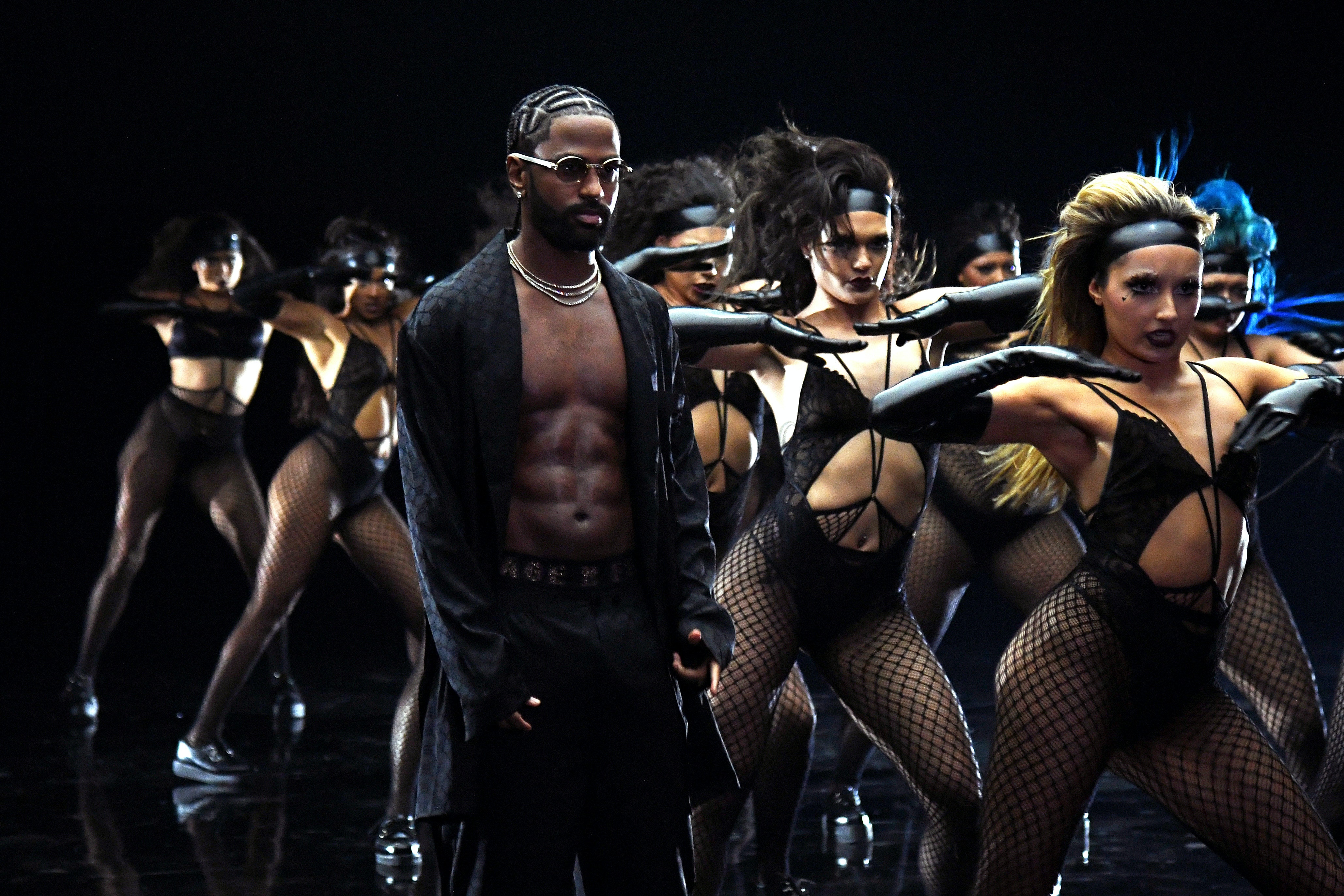 Prepare yourself for the next act: Lizzo. She dances in a royal blue bodysuit with fishnet pants, all while feeling herself to D’Angelo’s "Brown Sugar." Bad Bunny, surrounded by red flashing lights, sings his hit "Yo Perreo Sola," and into the next scene we go. As if this wasn’t all too much to take in, the likes of Laura Harrier, Paloma Elsesser, and Irina Shayk pose in a jungle-esque set — it has serious Garden of Eden vibes — while Frank Ocean’s "Self Control" plays.. And then, Rihanna comes out of a giant flower in a glittery bodysuit like the goddess Venus herself before disappearing back into her flower. 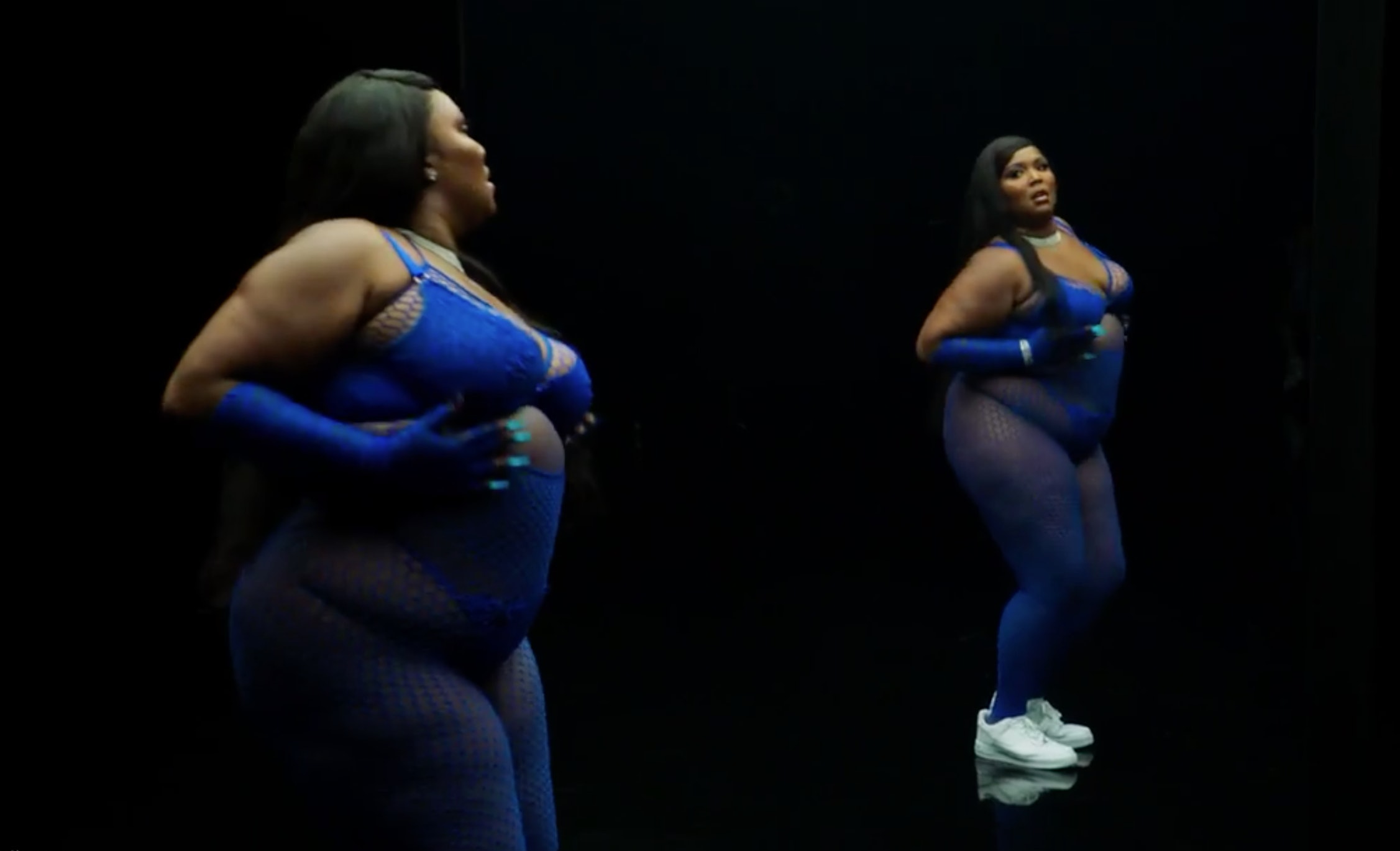 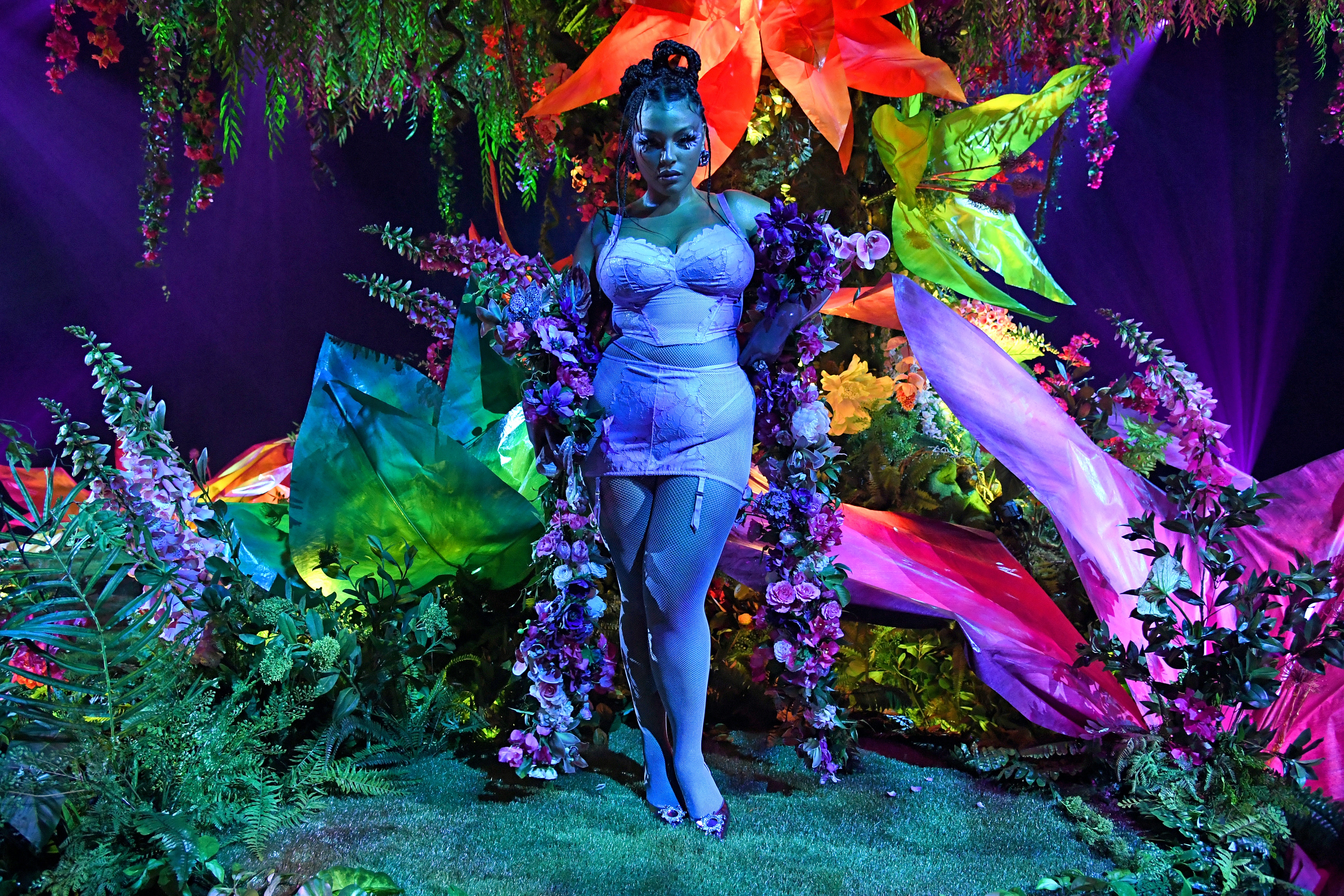 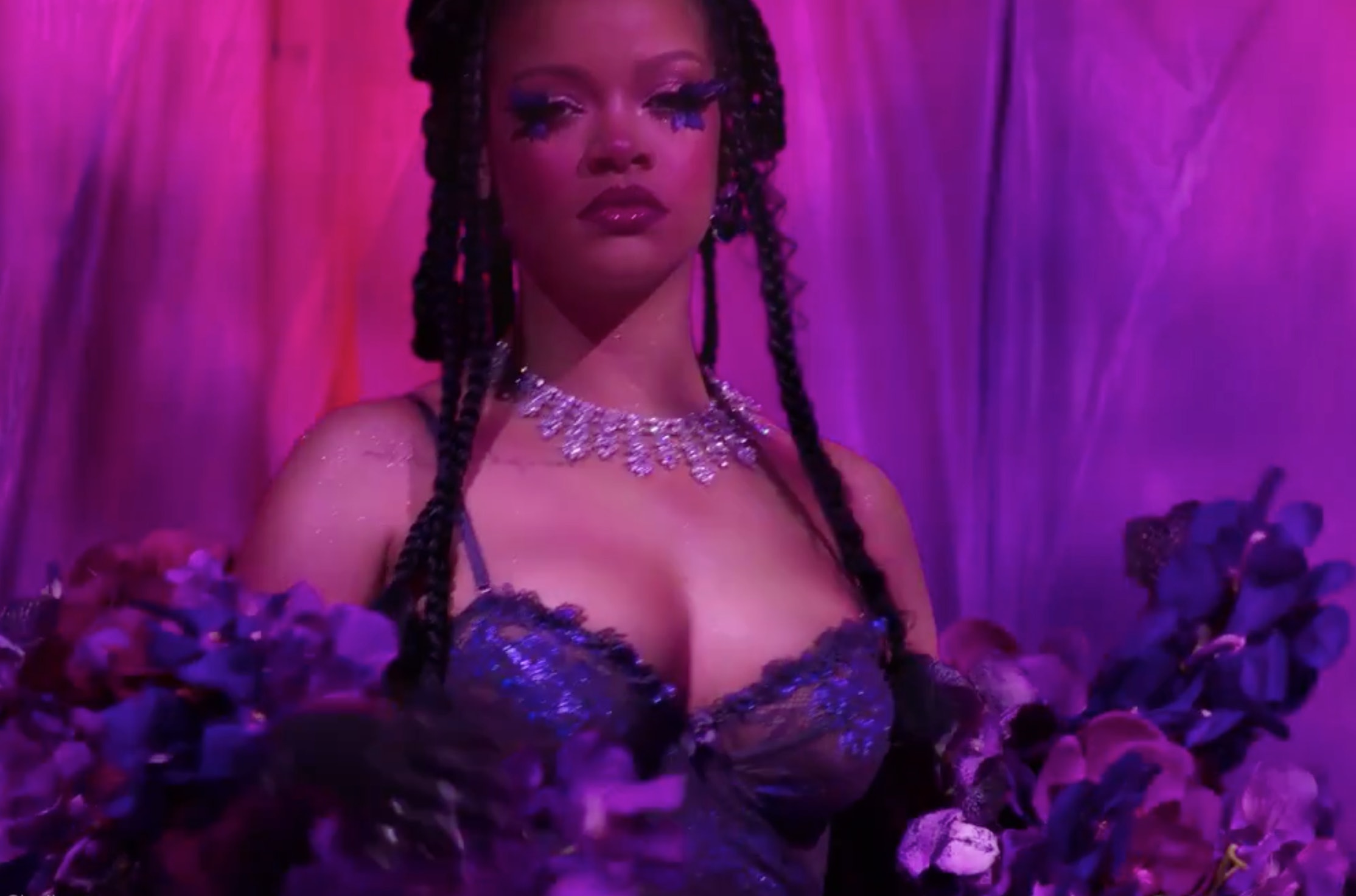 Miguel sings a soulful rendition of "Adorn" and then launches into "Waves." And suddenly, the garden is gone, and the show is in a slime green factory setting. Chika sits powerfully on a staircase, staring down the camera, as dancers frolic around her. Paris Hilton and Margie Plus lounge on tables in hot pink ‘fits. Willow Smith, a newcomer to the Savage X Fenty family, dances in slow-mo while wearing an all-black outfit that includes a long-sleeve shirt tied at the waist. 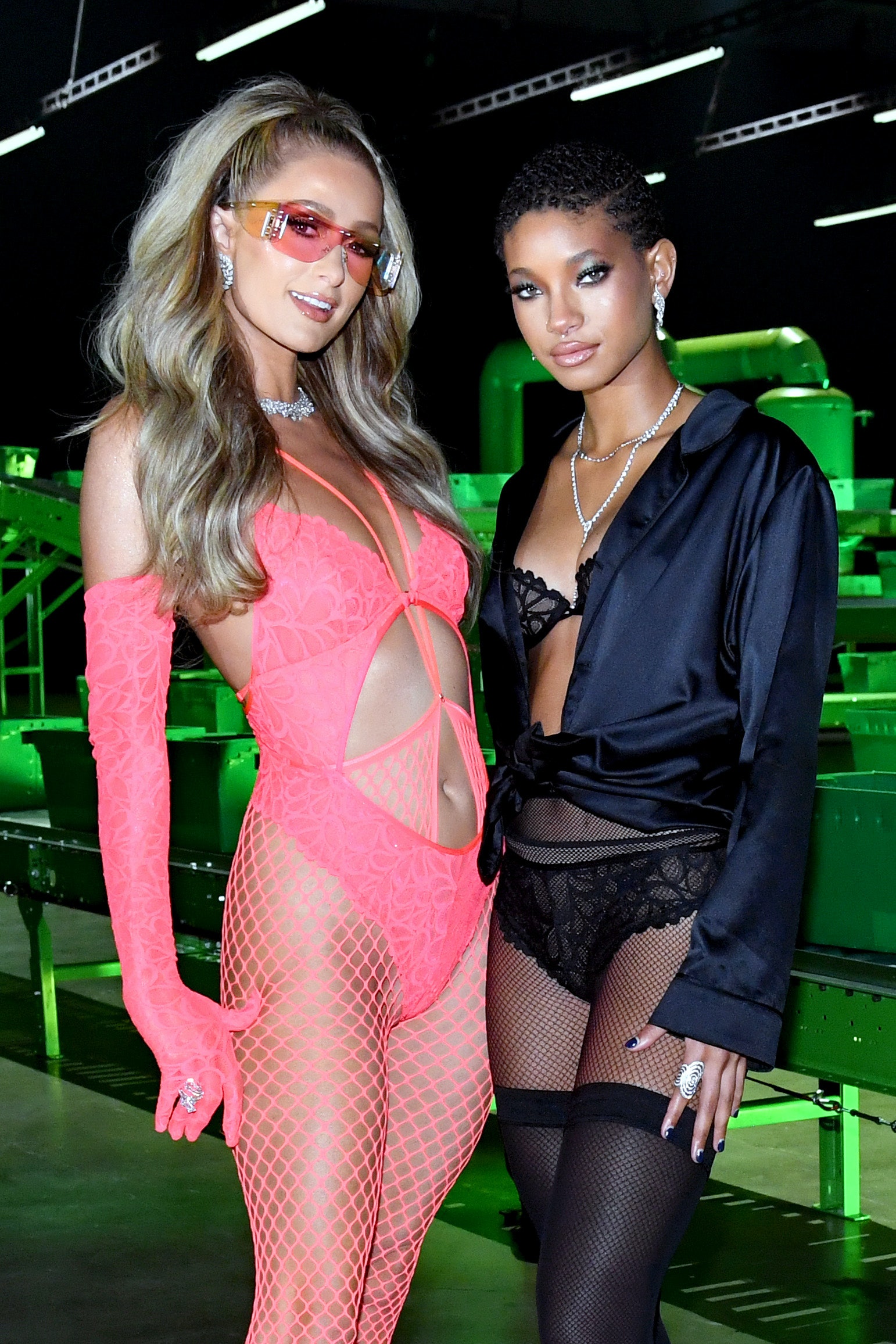 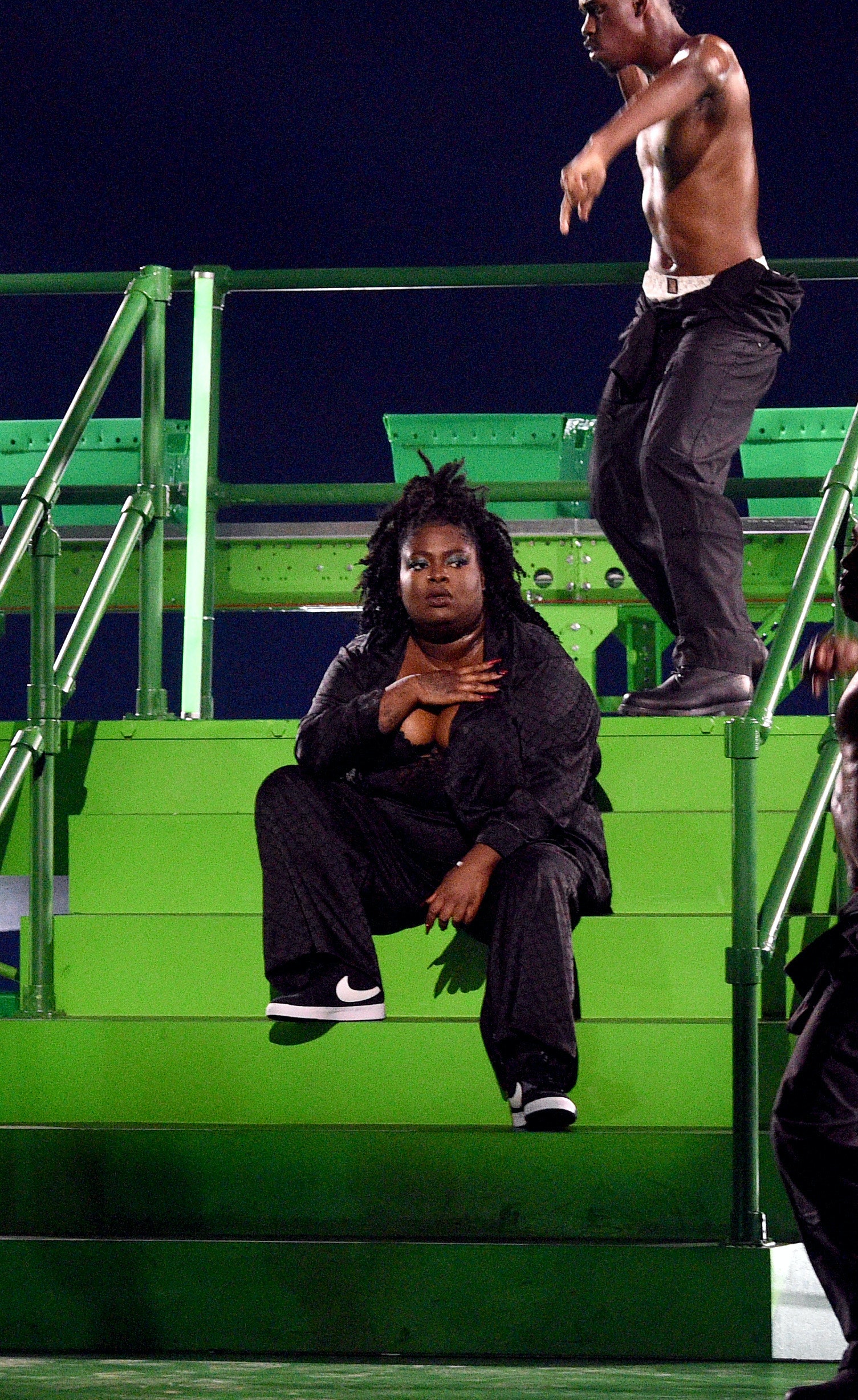 As if you weren’t already overwhelmed, Shea Coulee, in a black bodysuit, and Gigi Goode, in blue, then strut the assembly line floors Rico Nasty makes an appearance. Walking right across the table, Jayne rocks nipple pasties, a sheer robe, and stockings. Displaying more of the men’s line, Savage X Fenty veteran Christian Comb strolls down the stairs. 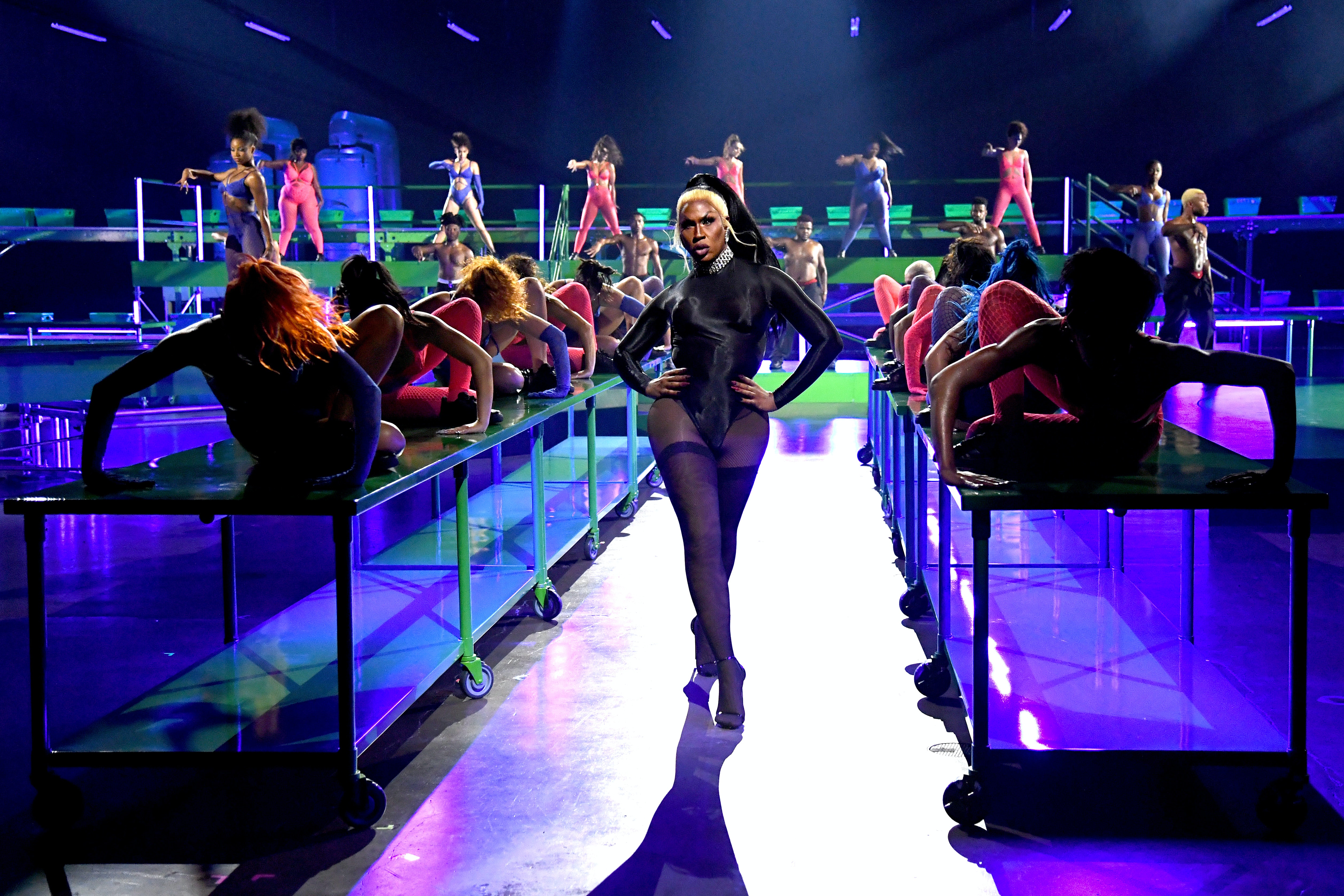 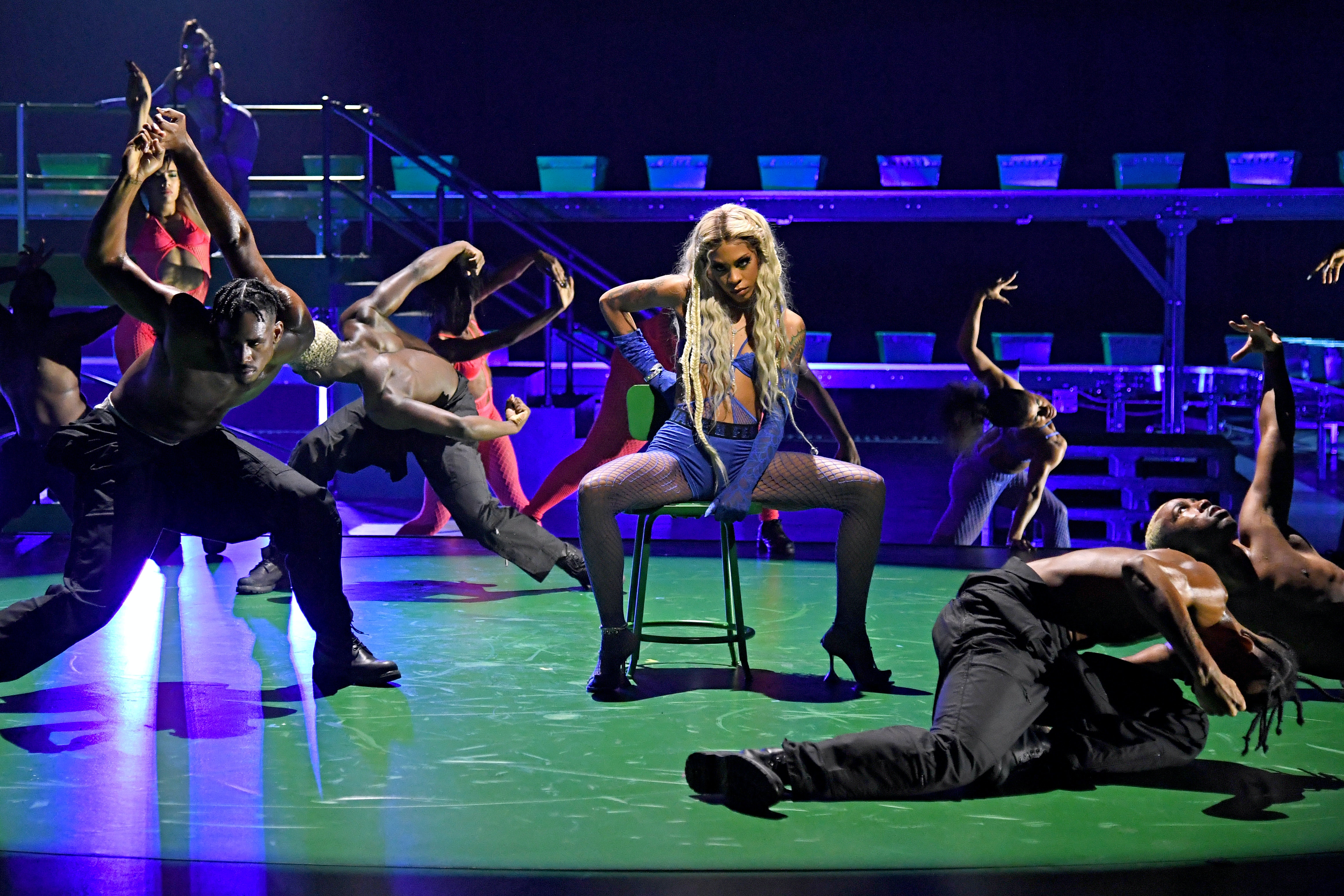 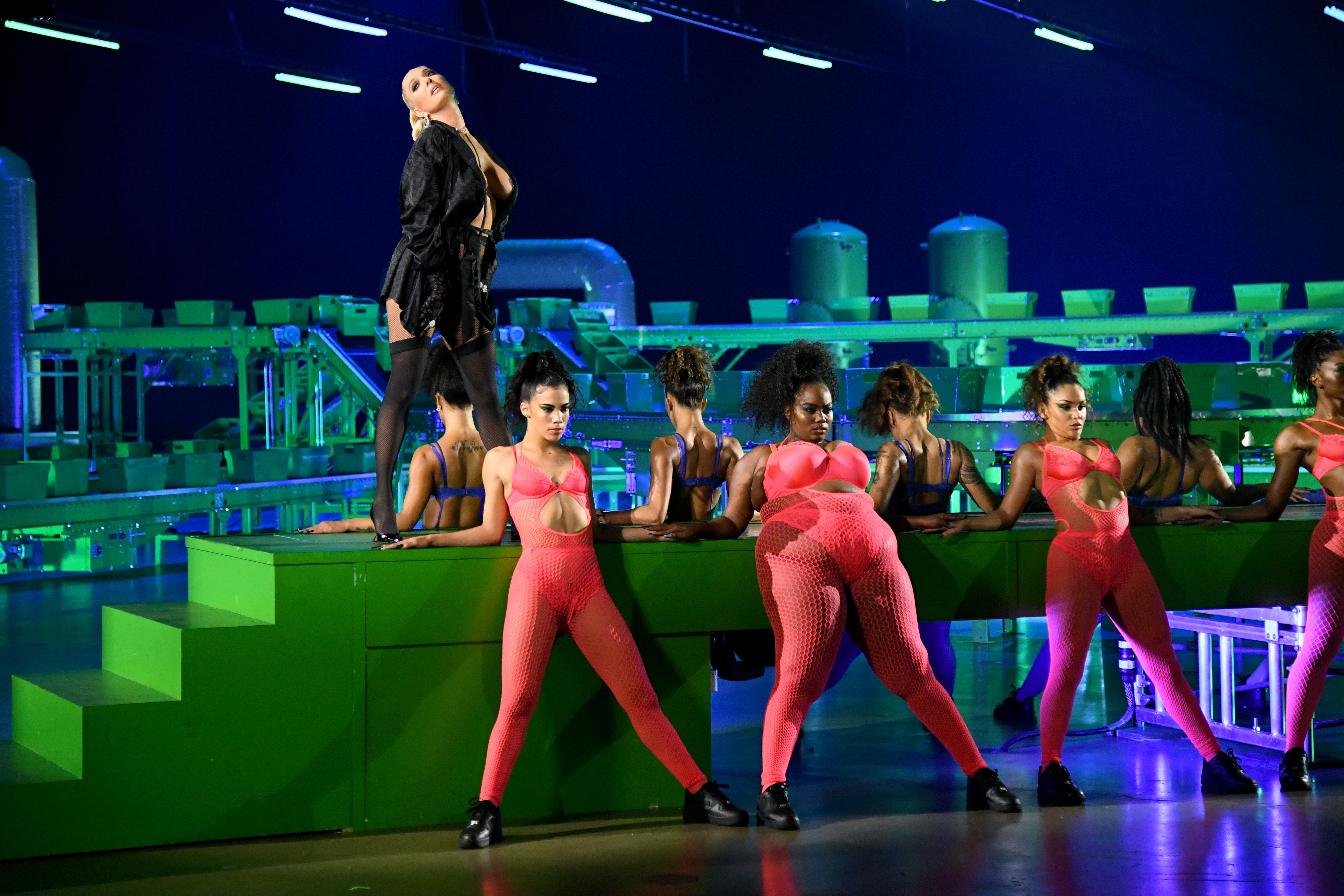 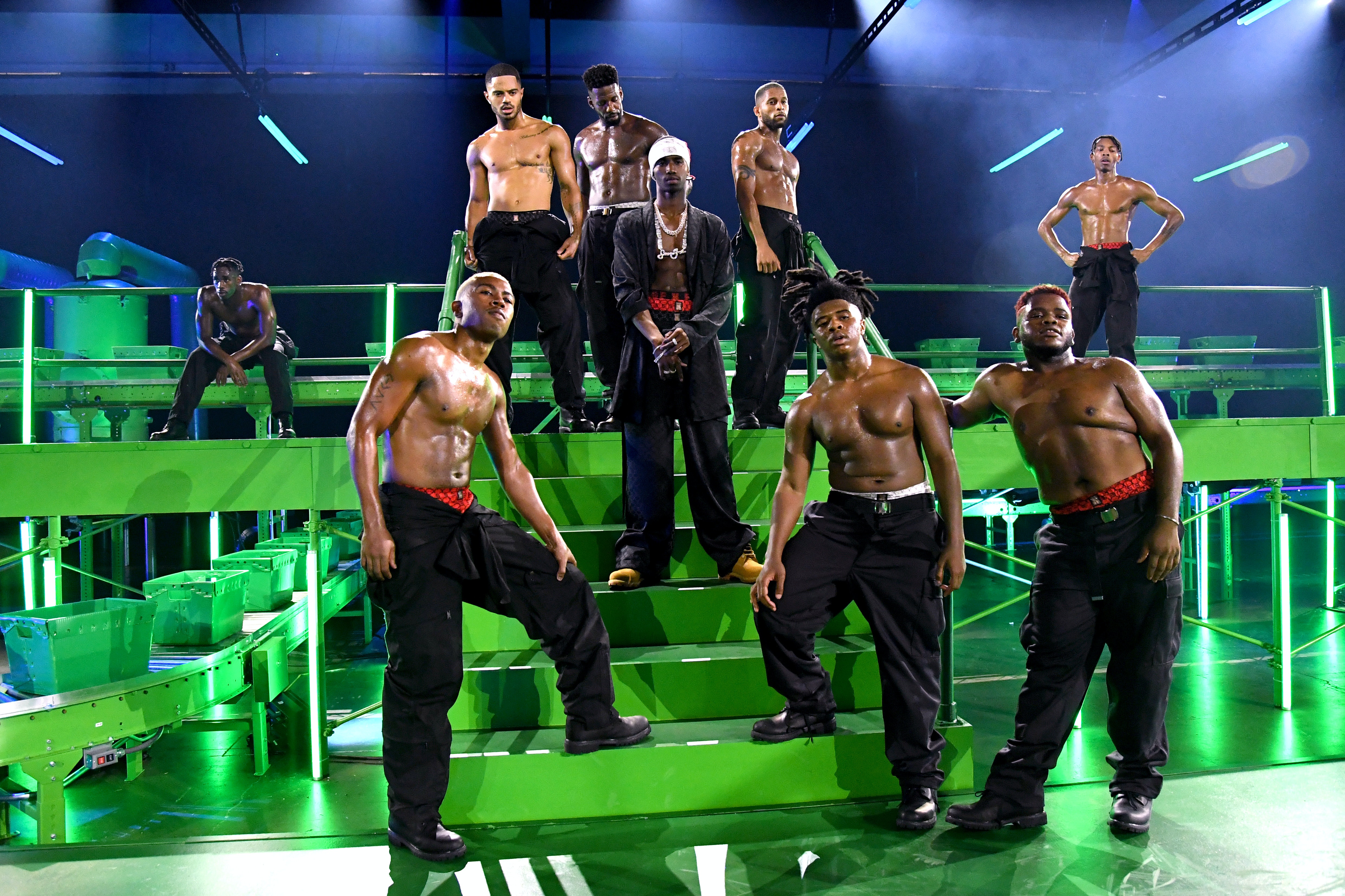 At almost the end, Rihanna graces fans with another appearance in a voluminous, ruffled top and leather shorts ensemble before all the cast applauds what was an incredibly successful, inclusive, and, quite frankly, indescribably runway. But make sure you keep watching past the ending sequence for Travis Scott and Young Thug to finish the show with "Franchise." 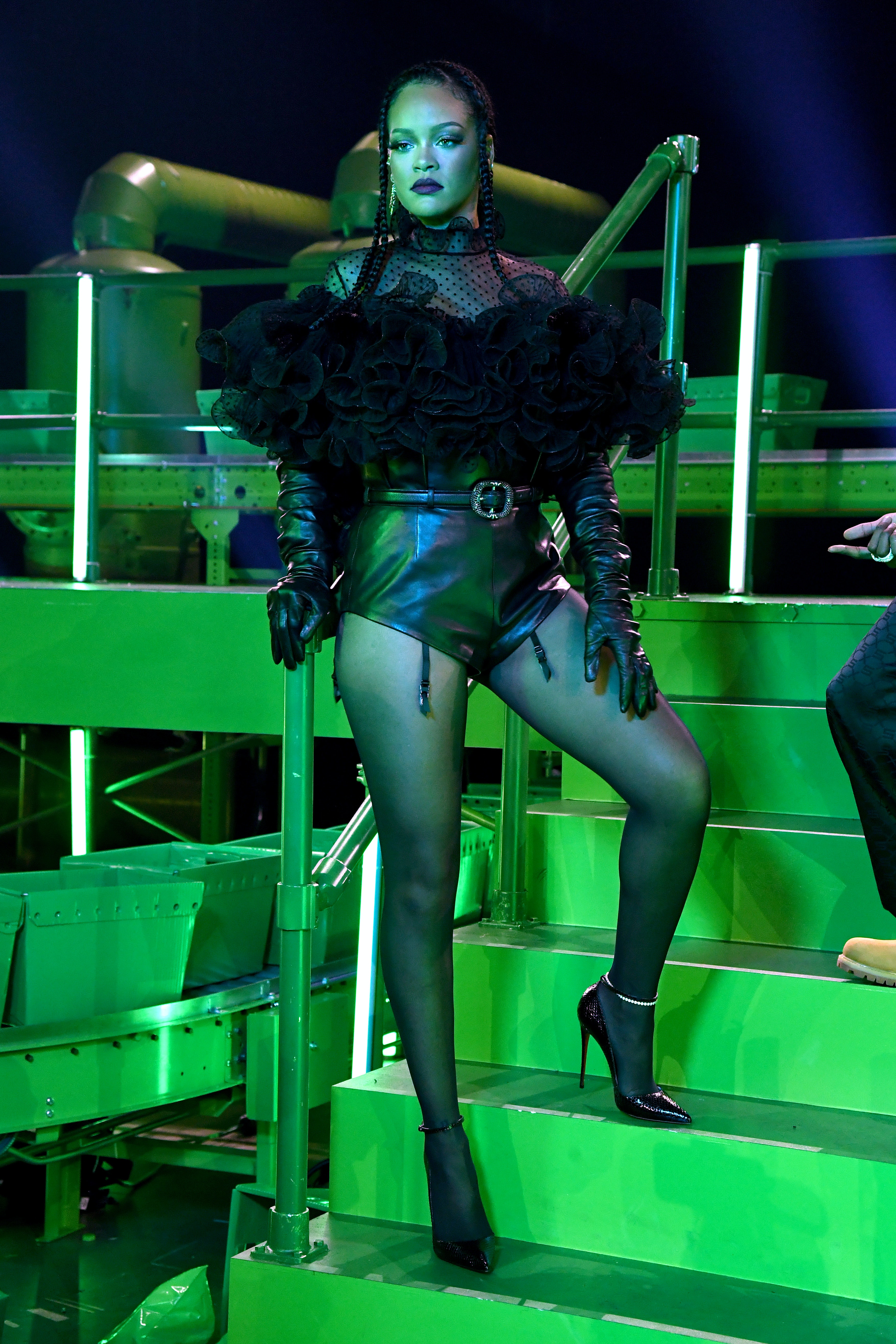 Having gotten to watch a sneak preview of the entire thing, I can safely say that the Savage X Fenty show Vol. 2 is everything you want and a million things more. With the celebrity appearances, music numbers, sexy lingerie, and so much more, it’s an entire experience that’ll transport you to a different dimension. You can check it out on Oct. 2 on Amazon Prime Video.