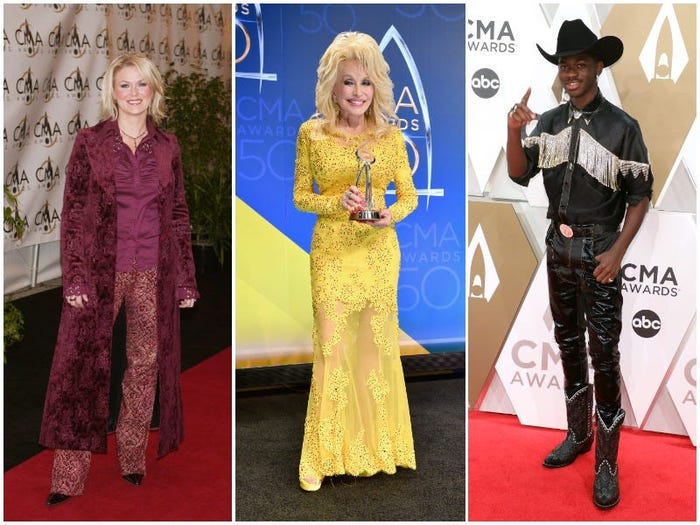 The Country Music Association Awards were broadcast on TV for the first time in 1968, making them the longest-running annual music awards program on network television, and through the years, country stars have walked the red carpet in a variety of eye-catching styles.

Ahead of this year's awards, which will air on Wednesday, November 11 at 8 p.m. EST on ABC, here are 25 showstopping looks from the CMA Awards.

Loretta Lynn attended the 1972 CMA Awards in a navy gown with a sparkly silver top. 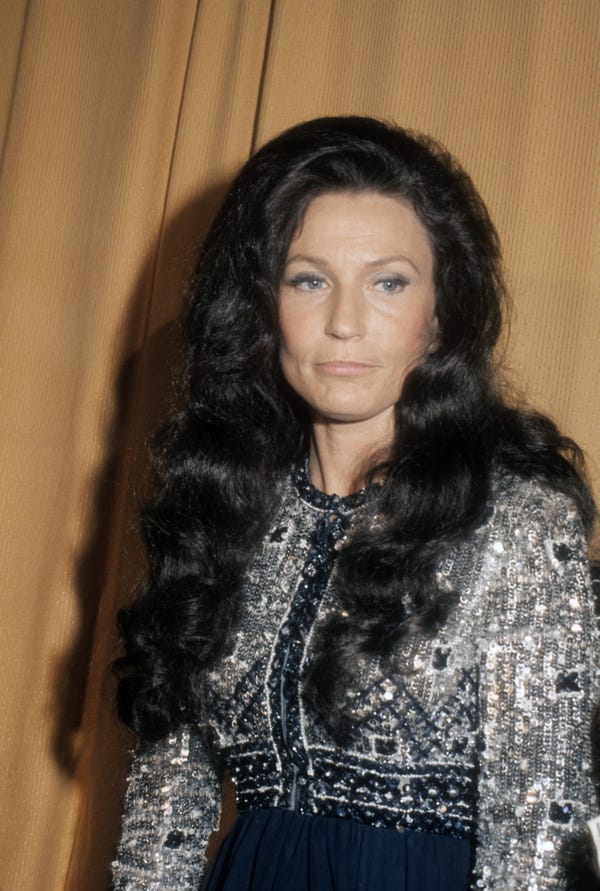 Lynn was the first woman to win Entertainer of the Year at the CMA Awards in 1972.

Johnny Cash looked dapper in a black tuxedo in a promotional still for the 1975 CMAs. 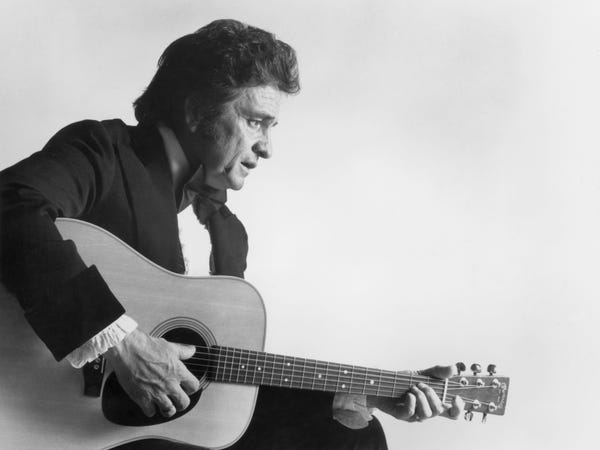 Barbara Mandrell co-hosted the CMA Awards in 1981 in a silver sequined dress. 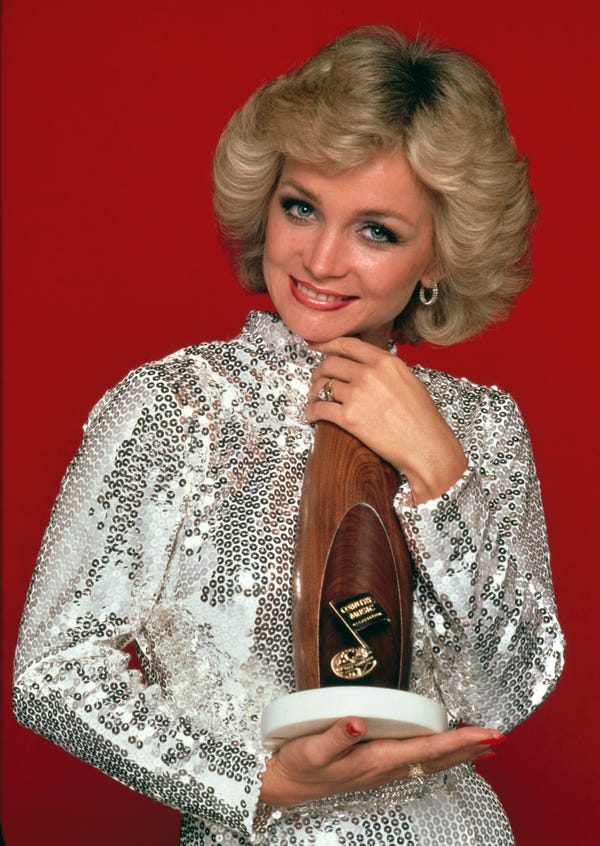 Mandrell won Entertainer of the Year both in 1980 and in 1981, making her the first artist to win the award twice.

Charly McClain paired a pale pink dress with a striped belt and statement necklace in 1982. 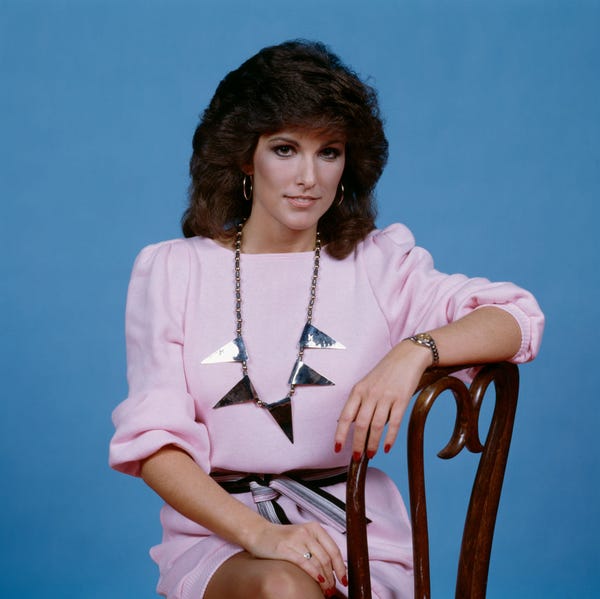 Among McClain's biggest hits are "Who's Cheatin' Who," "Sleepin' with the Radio On," and "Radio Heart." 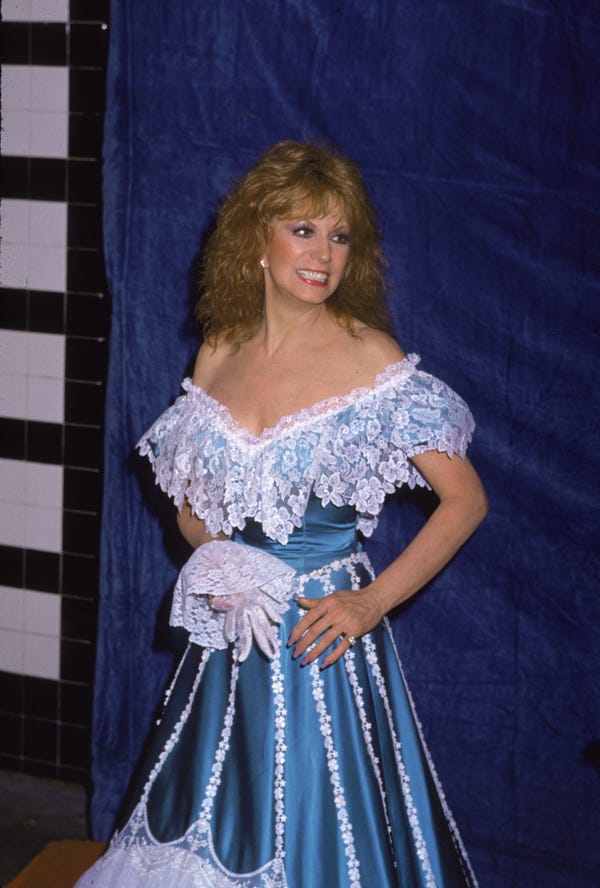 West was known for hits such as "Here Comes My Baby," "Would You Hold It Against Me," "Paper Mansions" and "Like a Fool."

Reba McEntire wore a blue dress in a similar shade with cutouts and fringed sleeves to accept the Entertainer of the Year award in 1986. 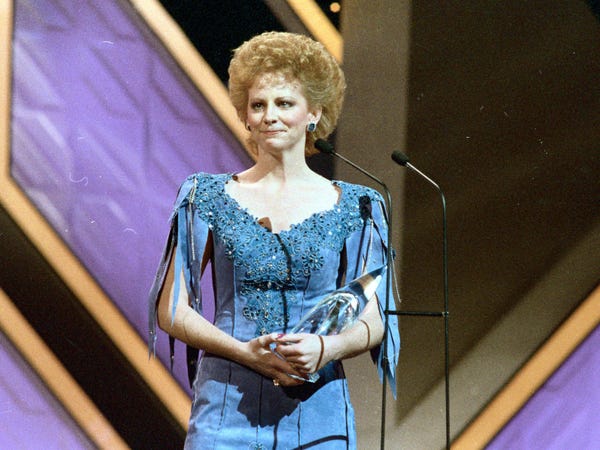 In addition to winning Entertainer of the Year in 1986, McEntire also has three Grammy Awards and won CMA Female Vocalist of the Year four times. She was inducted into the Country Music Hall of Fame in 2011.

In 1988, Lorrie Morgan wore a black halter dress to the CMAs. 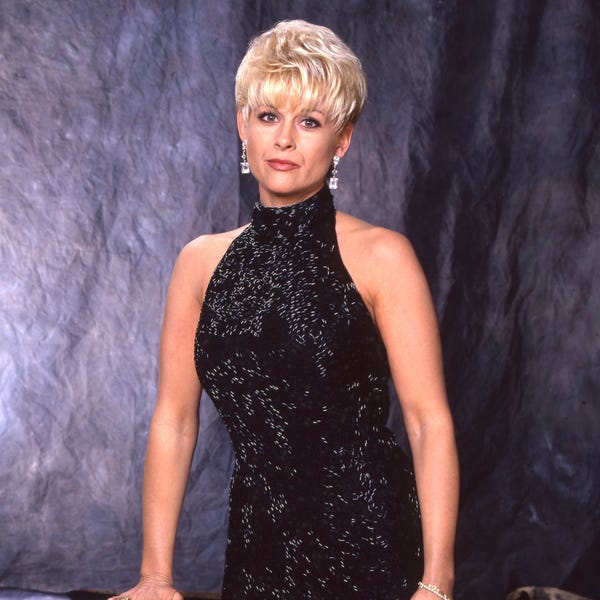 Vince Gill wore a gold brocade vest under his suit jacket while hosting the 1996 CMA Awards. 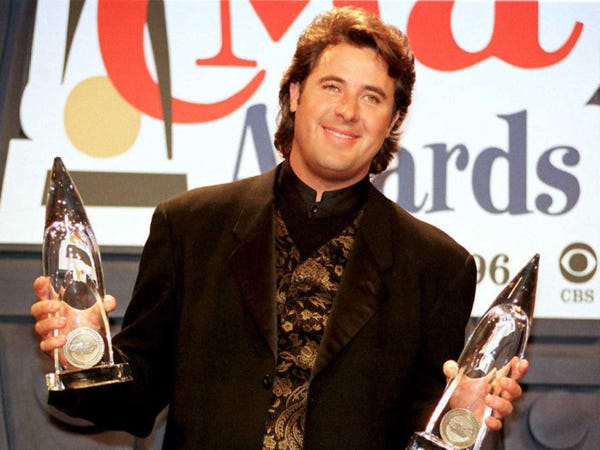 Gill won Song of the Year for "Go Rest High On That Mountain" and Vocal Event of the Year with Dolly Parton for "I Will Always Love You."

The Chicks (then known as the Dixie Chicks) coordinated in sequined dresses. 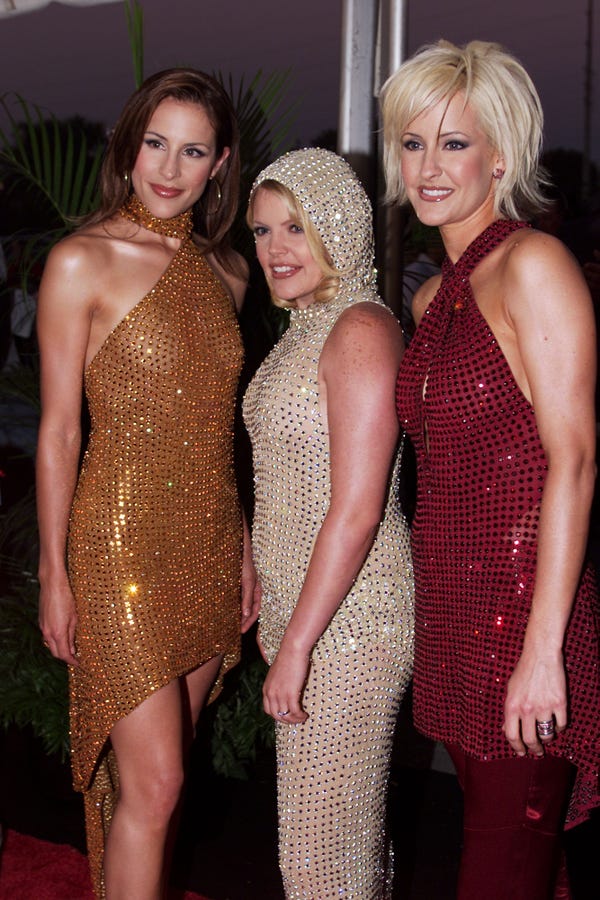 In 2020, The Chicks dropped "Dixie" from their name to distance themselves from the Confederate South and released a new album called "Gaslighter." 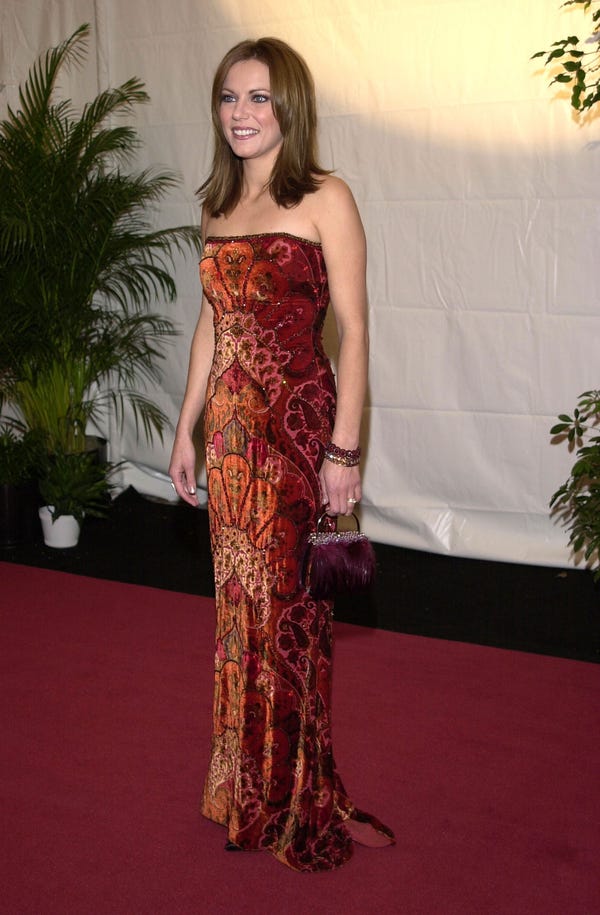 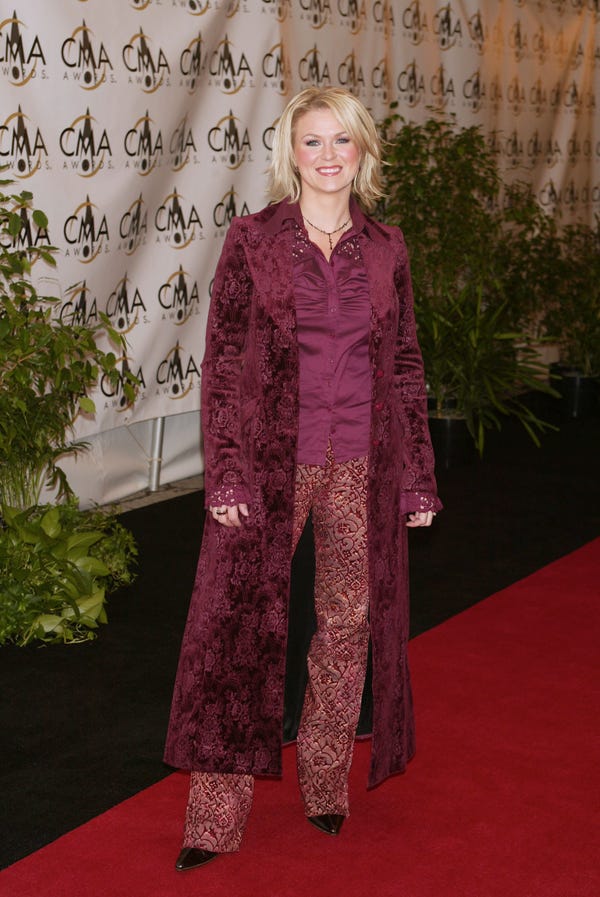 Johnson began writing for other artists, scoring her first No. 1 hit with Chely Wright singing "Single White Female." She also achieved success singing her own songs, including  "Complicated," "Georgia," and "I Don't Want You to Go."

Shania Twain shone in a gold sequined gown at the 2002 CMAs. 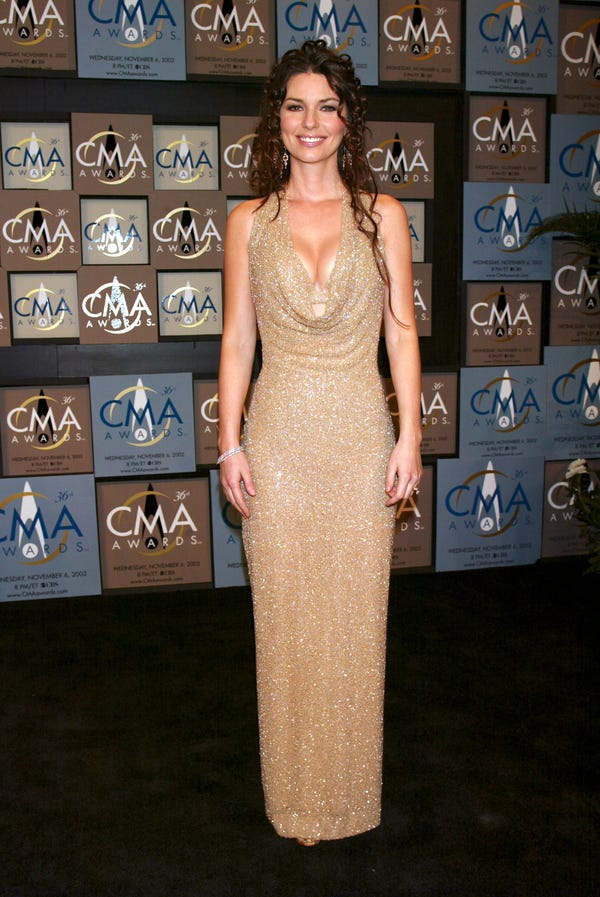 Twain won Entertainer of the Year in 1999.

Blake Shelton sported shoulder-length hair under a black cowboy hat at the 2003 CMAs. 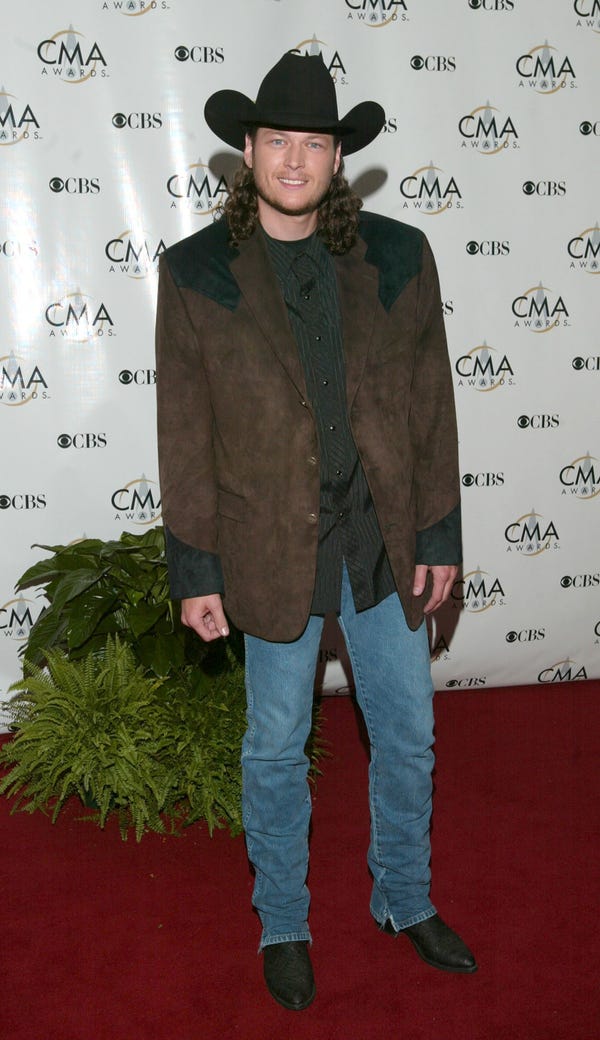 Shelton was nominated for Best New Artist in 2003. He eventually won Entertainer of the Year in 2012.

Willie Nelson wore his signature red bandana at the 2004 CMAs. 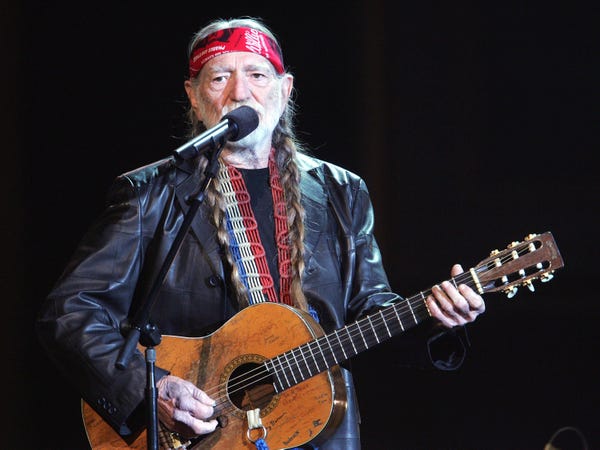 Nelson has one of the longest, most illustrious country music careers in history. In addition to 10 Grammy wins and 52 nominations, Nelson has earned several prestigious awards such as a Kennedy Center Honor and the Library of Congress Gershwin Prize for Popular Song. 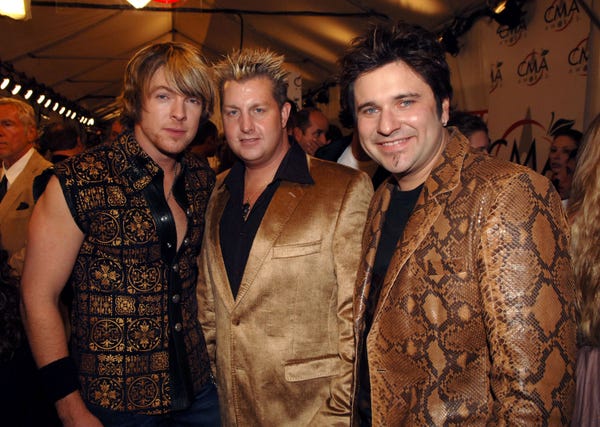 Charles Kelley, Hillary Scott, and Dave Haywood of Lady A (formerly Lady Antebellum) walked the red carpet in shades of gray in 2009. 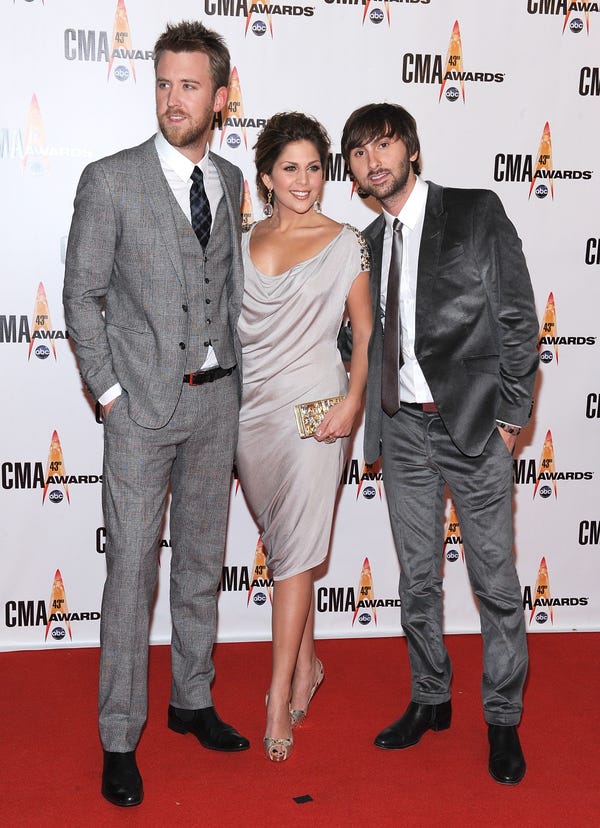 Lady A won Best New Artist in 2008 and went on to win Best Vocal Group in 2009, 2010, and 2011. The band changed their name from Lady Antebellum to Lady A in 2020 because the term "antebellum" has ties to slavery. A blues singer named Anita White, who had used the stage name Lady A for decades, said the band didn't contact her before announcing the change. They later connected and reconciled in a phone call.

Miranda Lambert stunned in fuchsia at the 2010 CMAs. 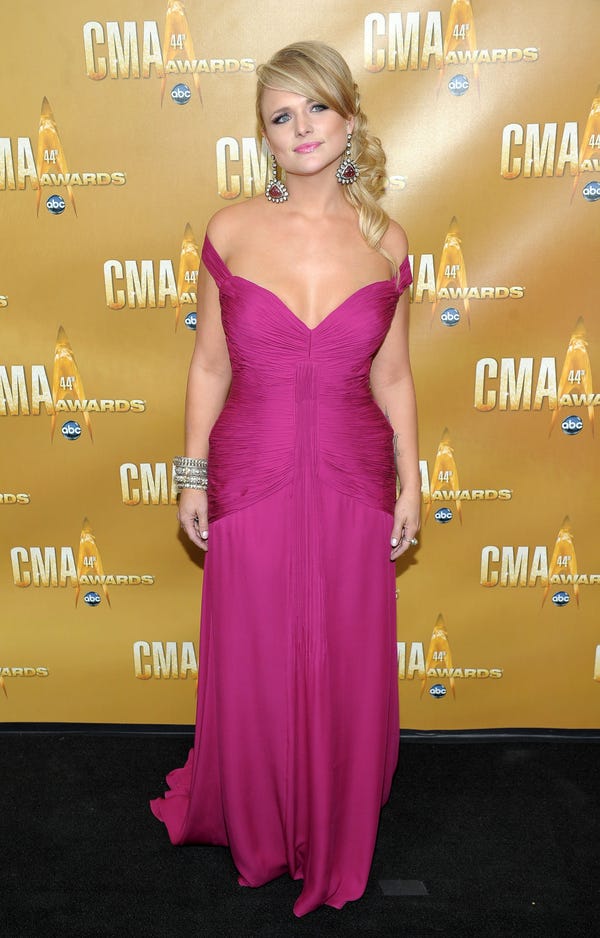 Lambert, who wore an off-the-shoulder Sherri Hill gown to the awards, has had a career total of 55 CMA Award nominations. She has won 13.

Little Big Town stuck to black and gold in 2012. 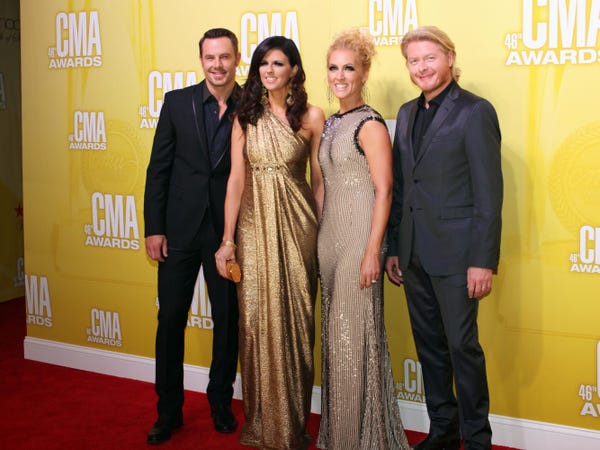 They won best vocal group for the first time in 2012, and have won it five more times. 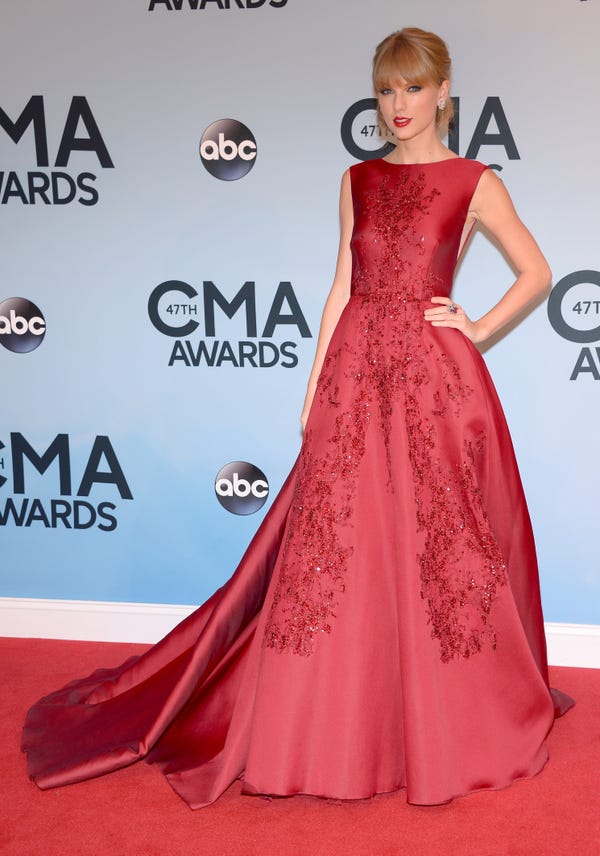 Swift won Entertainer of the Year in 2009 and 2011. She's one of only two female artists to win the award twice (the other is Barbara Mandrell).

Kelsea Ballerini attended the CMAs for the first time as a nominee in 2015 wearing a tulle gown with a metallic bodice. 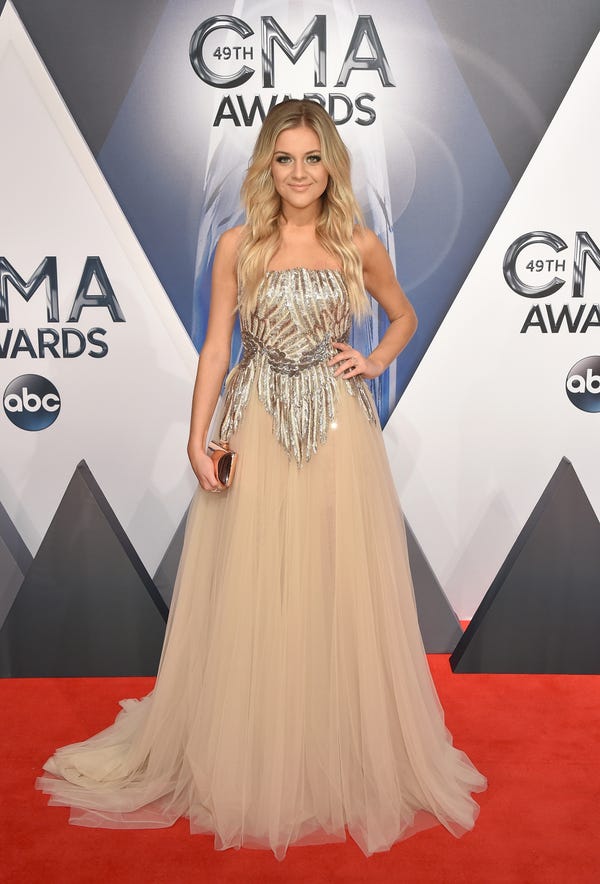 Ballerini, who wore a Paolo Sebastian gown in 2015, has yet to win a CMA Award, but has been nominated seven times.

Dolly Parton shone in a yellow gown in 2016. 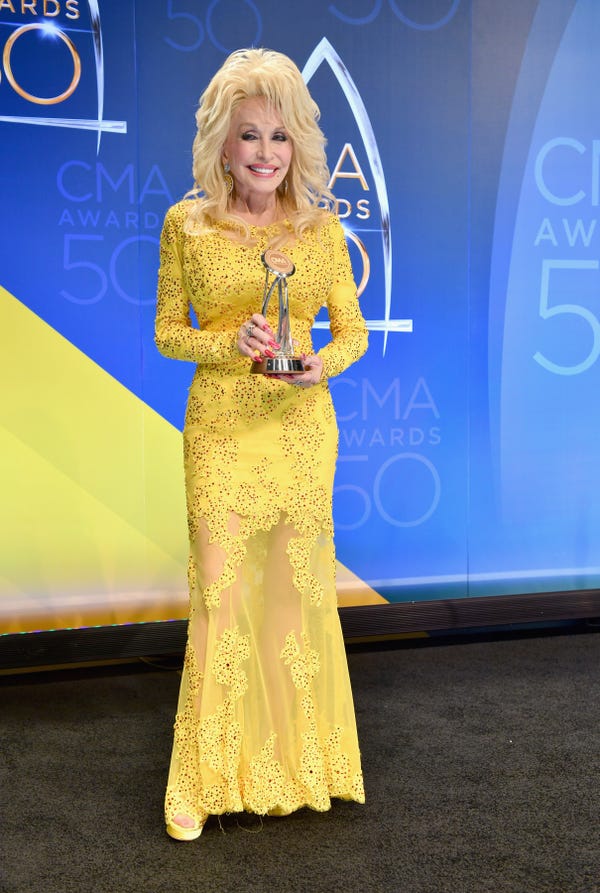 Faith Hill and Tim McGraw made a striking pair in 2017. 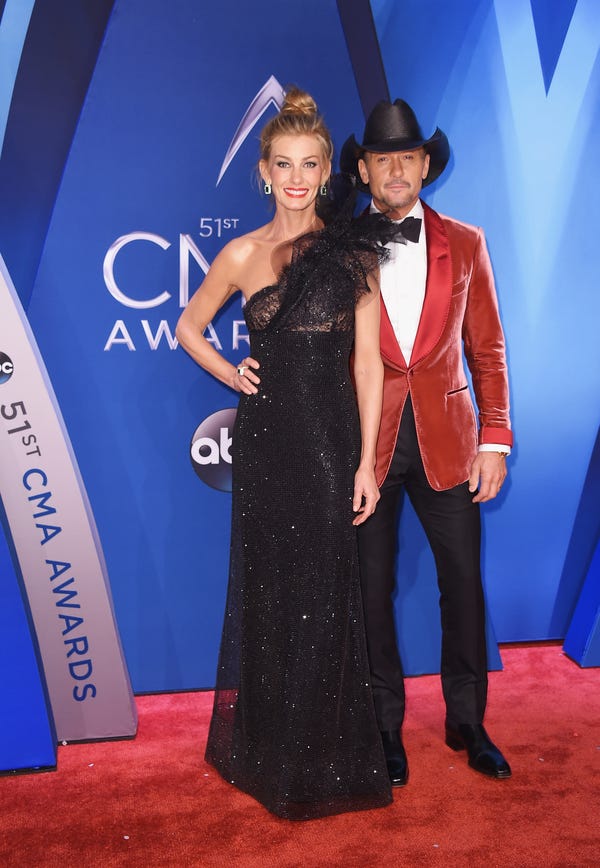 The couple has been married for over 20 years. They first met back at the annual Country Radio Seminar in Nashville in 1994.

Carrie Underwood showed off her maternity style in 2018 in an embellished Uel Camilo gown. 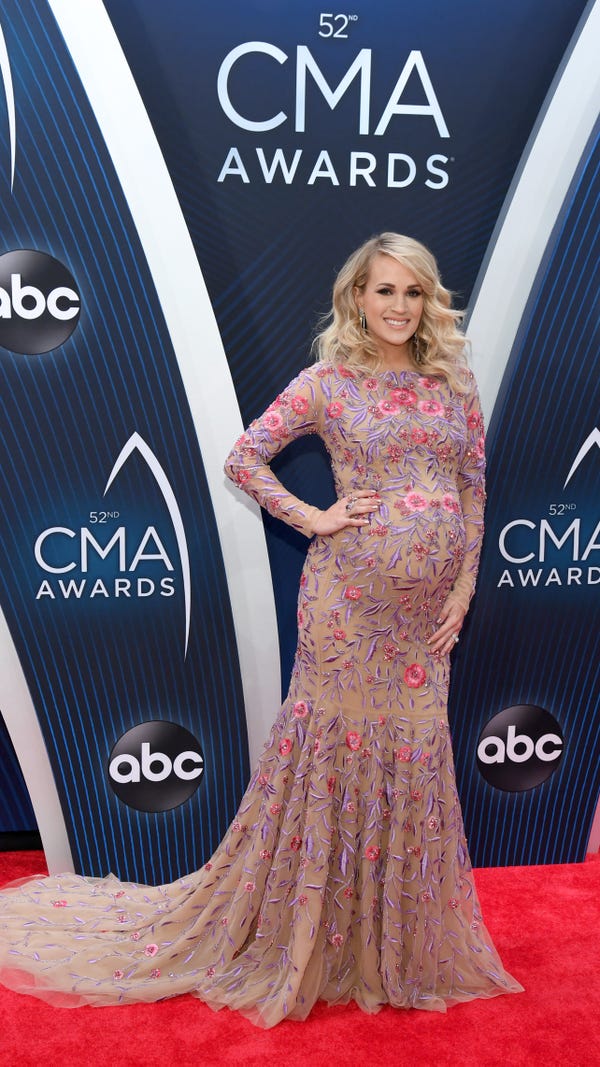 Lil Nas X took the country world by storm in 2019, and walked the red carpet with a snazzy look to match. 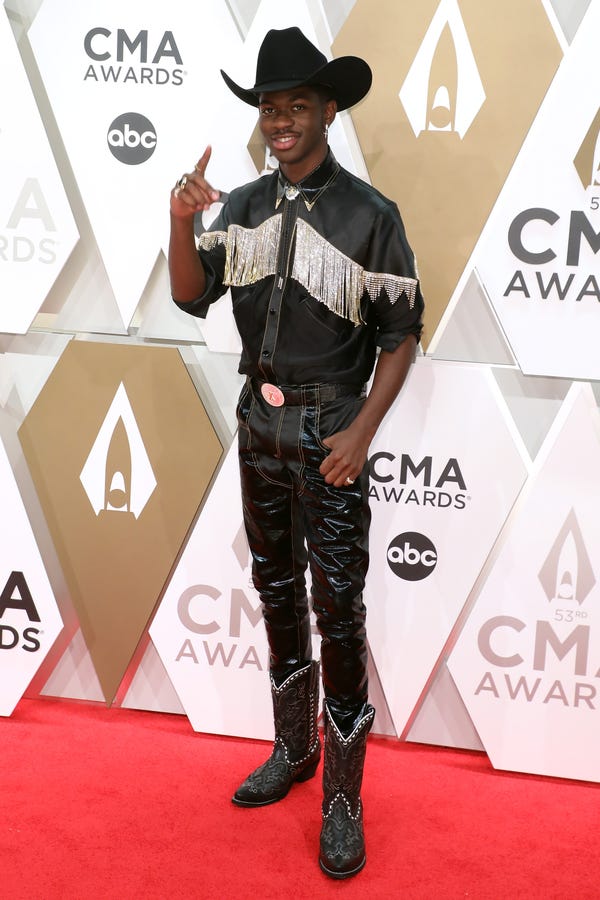 Kacey Musgraves channeled the 1970s on the CMA Awards red carpet in 2019. 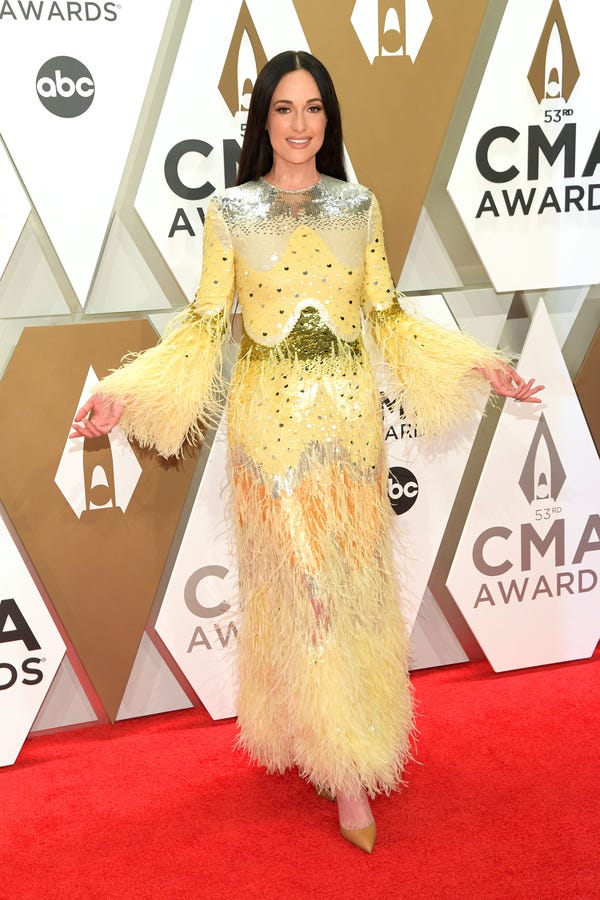