It took plant breeder Robert Larnach 16 years to develop a vriesea with glossy leaves the colour of a rich Barossa shiraz. He started with a plant that was all green, so the ruby-leaved gems sitting next to the originals look like the result of a magic spell. Larnach will tell you there’s no special incantation or shortcut, just lots of thinking, attention to detail and patience. 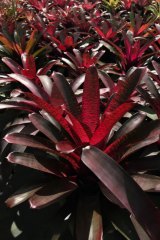 It took plant breeder Robert Larnach 16 years to develop a vriesea with glossy leaves the colour of a rich Barossa shiraz.Credit:Robin Powell

Vrieseas are bromeliads, a group of plants encompassing some 3500 species, mostly from Central and South America. They live across such diverse landscapes and climates that there is one to suit every need. But in 2000, when the Larnach family shifted their nursery business focus from indoor plants to bromeliads, fellow  nursery people scoffed.

“They said we were crazy, that we’d never make a living out of broms because they just weren't popular enough,” recalls Robert’s son, Jamie, a former cabinetmaker now full-time in the family business, Bromeliads Australia.

The joke was on the pundits as broms took off: in domestic and commercial interiors; as part of green walls; in contemporary sculptural planting designs and in low-maintenance gardens. Even non-gardeners were hooked.

The most black-thumbed among us can keep a brom alive as they can be ignored for months without serious consequences. That’s because they are epiphytes that hang out in the trees in their original homes, getting food and water only from whatever falls into the well of the plant. The roots provide a nutrient top-up but their main purpose is simply to anchor the plant.

To upgrade brom health from surviving to thriving, simply treat them well. Keep them under-watered rather than overwatered, and give foliar feeds through the cooler months of the year. Skip the feeds over summer as nutrient-rich water sitting in the well of the plant during hot weather can result in algal blooms that stain the leaves.

Once the plant flowers and sets seed, it will die and new pups will appear at its side. To keep plants tidy, use a serrated knife to cut the pup from the mother when it is about a third as big as its parent. Cut the base of the mother where it joins the pup, so as not to damage the roots of the pup.

The anchor roots are grown by the plant only in its juvenile stage, so if these are torn or cut, the plant will never be completely stable in its new home. Plant the pup into a pine bark mix, with a sprinkle of slow-release fertiliser.

Satisfied with his red vrieseas, Larnach is now working towards vrieseas with multi-branched flower stems, as well as alcantereas with less brittle leaves that can be easily transported and transplanted without tearing, and neoregelias that hold their brilliant colour no matter how much sun or shade they receive. Stay tuned.

Bromeliads Australia will be at Plant Lovers Fair at Kariong on September 28-29.