The street where I grew up: Lorraine Kelly, 62, TV presenter and journalist shares memories of Swanston Street, Bridgeton, Glasgow 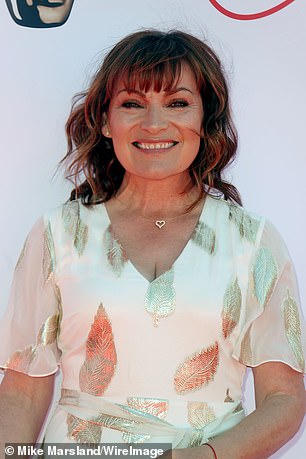 From the age of two until I was almost 13 I lived with my shop assistant mum Anne and my TV engineer dad John in a second floor tenement flat with just two rooms and an inside toilet in the East End of Glasgow. But it was a big step up from the flat in the Gorbals area with just one room and an outside loo where I spent my first two years.

It might sound strange now, but until I was 13 me, my parents and my brother Graham, who arrived when I was six, all slept in one bedroom – Mum and Dad in a double bed, with Graham and me in bunk beds. But that was what everyone did. It was a shock when Graham appeared on the scene.

He was like a baby from central casting, with big blue eyes, chubby cheeks and curly hair, so he was the centre of attention. I naturally loathed him and we fought like cat and dog, but we get on well now.

The living room had a kitchenette in the corner with a sink and a cooker and a table where we could eat our meals. We washed at the sink and went to the public baths in nearby Ruby Street once a week for a proper wash in a big stainless steel bath.

In the winter we had a coal fire in the living room but nothing in the bedroom, so there was ice on the inside of the windows. Mum turned our flat into a little palace – it was spotless and shiny, and she made it really homely.

We always had enough to eat and lovely clothes. We were considered quite posh by some of our neighbours! 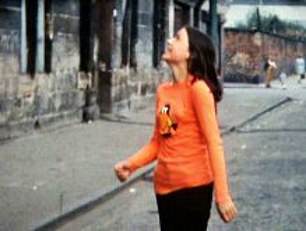 Lorraine as a young girl, playing out on the street in Glasgow

Because my dad was a TV engineer we had the first colour TV in the street and everyone came to have a look. He also drove a small van, so we went for days out to the beach on the Ayrshire coast and to Loch Lomond.

My parents taught me to read and write before I went to school, which was a massive advantage. They were teenagers when I was born, so they listened to cool 60s music like The Rolling Stones, The Beatles and Dusty Springfield, and played vinyl LPs and singles on the radiogram.

The thing I remember most was the sense of community, with everyone looking out for each other. Us kids played ball games and hide and seek in the street, and Batman and Superman on the old disused railway line nearby, using our duffel coats as capes.

We also played what we called ‘Wee Shops’, with tins of mud or ‘clabber’ to sell and broken glass as money. Mums would throw kids ‘a piece and jam’ – a sandwich – from their windows to eat in the street, and we would play outside until it got dark.

Some people might think it a tough childhood, but we were all in the same boat. And while a lot of my pals may not have had many material things, I was lucky and grew up wanting for nothing in a loving family.

In 1972, when I was almost 13, our flat was condemned as part of the Glasgow slum clearances. Housing officers inspected the flats and if they deemed your family ‘decent’, you’d be sent to a modern home in the new town of East Kilbride, so that’s where we ended up.

I was sad to leave my friends, many of whom I lost touch with. But we soon built a new life, in a lovely little house with a bathroom and a garden. I even had a room of my own.