It’s the stimulus no one was expecting.

Scott Morrison stood in the Prime Minister’s parliamentary courtyard on March 24 last year to outline the restrictions to be put in place to curb the spread of COVID-19. It was his 2685th word that revealed Australians would be banned from leaving their own country. 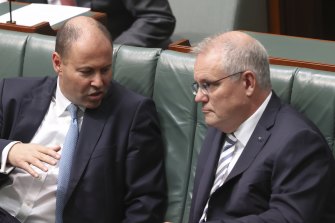 The ban on Australians leaving their own country Scott Morrison announced last March will be a key but unrecognised feature in the fiscal recovery Josh Frydenberg unveils in his post-pandemic budget.Credit: Alex Ellinghausen

At the time, it attracted scant attention. There was just one question from the assembled media about the ban, and that was about its timing.

But the ban – the only one of its type imposed by a democratic country – has turned into an unpredicted stimulus helping to save the economy from the deepest recession since the 1930s.

And that stimulus will be a key but unrecognised feature in the fiscal recovery Treasurer Josh Frydenberg unveils in his post-pandemic budget on Tuesday evening.

When the international border was closed, the immediate focus was on what it would mean to the tourism and education industries. With millions of people not coming into the country, the fear was of an economic calamity.

Some economists tipped, correctly, that the impact may be overblown. They pointed out that Australian tourists spent more overseas than foreign visitors spent locally.

But the stimulatory impact of keeping 25 million Australians locked in their own country, while showering them with record low interest rates, cheques and other forms of financial support, was never taken into account.

In May last year, Frydenberg fronted the National Press Club for what would have been the Treasurer’s traditional post-budget address. Instead, with the budget pushed back to October, the focus was on the immediate future for the economy.

Pressed on the impact of the closed border, he – like most experts – focused on what it meant to people trying to enter Australia. 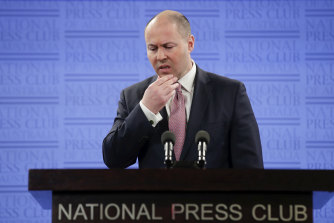 Josh Frydenberg during his May 2020 address to the National Press Club.Credit:Alex Ellinghausen

“As long as the borders are closed, obviously, the movement to Australia of international students and permanent migrants will be restricted,” he said.

“It will have a significant impact on the economy, but we have allowed for that in our forecasts.”

In July, the government released an economic and budget update. That forecast the economy to contract through both 2019-20 and 2020-21, unemployment to reach 8.75 per cent, household consumption to shrink by more than 3 per cent and wage growth to crash to record lows.

The slowdown, on top of all the government support measures put in place, would result in a budget deficit of $85.8 billion in 2019-20 and forecasts of a $184.5 billion shortfall this financial year.

Frydenberg noted the economy was likely to grow 1.5 per cent in the September quarter. That recovery would be offset by the restrictions then in place across Victoria as well as “continued declines in business investment, residential construction and export volumes related to the international border restrictions”.

The border closure then, and in subsequent budget updates, was viewed through the prism of what was coming into Australia – not what the ban meant in terms of domestic spending.

It transpired the Australian economy grew 3.4 per cent in that September quarter. It was the largest quarterly lift in GDP since the 1970s, driven by a huge increase in household consumption.

Three months later, the economy posted a 3.1 per cent expansion. These were the biggest back-to-back quarters of growth on record and again, household spending was a key factor.

Given the well-grounded fears at the start of the pandemic that our border closure would disrupt the economy and the budget through the absence of tourists and students, how did the economy recover so quickly?

The answer may be in the millions of Australians forced to stay at home rather than head overseas.

Australians are a nation of travellers. In the 12 months to January last year, more than 11.3 million Australians returned to the country after a trip overseas. The average length of time overseas was about 17 days. By contrast, the country welcomed 9.5 million tourists into the country.

In the 12 months to January this year, the number of returned Australians collapsed to 1.4 million, with almost all of those returning in January, February and March last year.

That fall of almost 10 million people represents 10 million consumers who would have spent money overseas but instead were forced to twiddle their thumbs at home. And while twiddling their thumbs, they were being showered with cash.

The Reserve Bank slashed interest rates to a record low of 0.1 per cent while opening the taps on $200 billion of quantitative easing.

The federal government introduced the coronavirus supplement for welfare recipients (originally $550 a fortnight), put in place its JobKeeper wage subsidy ($90 billion), delivered $750 cheques on more than one occasion to aged pensioners and veterans and allowed people to tap their superannuation.

States introduced their own programs, including well-supported subsidised domestic holiday policies, while handing out thousands of dollars to potential home buyers.

Some of that money has gone into a property market that has been running at near-record levels.

Where there were fears of a house price plunge due to COVID, prices have climbed strongly in every capital city and across every region. Savings that had been earmarked “Disneyland” or “Paris” instead found their way into property labelled “South Morang” or “Alkimos”.

About 2000 mortgages a day were bought through March, a rate so high that ANZ boss Shayne Elliott revealed this week the workload was affecting his bank’s processing technology.

He noted the growth was being driven by Australians and New Zealanders staying home with money to spend.

“The first thing they want to do is buy a home,” he said. “The volumes are unprecedented. We have not seen sustained high volumes like this ever before. When we built our machines, it was never imagined we would have to cope with these kinds of volumes every day of the week.”

It’s not just housing where trapped Australians have spent their cash. The car market, which had struggled for years pre-pandemic, has surged.

The price of second-hand cars has climbed almost 40 per cent over the past year. At the other end of the market, sales of luxury vehicles have also soared. They now account for a record proportion of all passenger cars sold.

Even with us falling behind on the vaccine rollout, people think ‘we’ve got this’ and so it hasn’t hit confidence.

Deloitte Access Economics director Chris Richardson said it appeared the ban on Australians leaving the country had delivered an unexpected boost to the economy.

He said as Australia had successfully controlled the spread of COVID-19, confidence among residents was high. Those confident and cashed-up residents had helped the economy recover.

“There’s that key linkage between getting the health response right, which then boosts confidence, which then feeds back into the economy,” he said. “Even with us falling behind on the vaccine rollout, people think ‘we’ve got this’ and so it hasn’t hit confidence. And that’s meant people have kept spending.”

It was not just expensive items that grabbed the attention of consumers. Spending on furniture and floor coverings among NSW shoppers has climbed almost a third since early last year, while Victorians have increased expenditure on electrical goods by 18 per cent.

Senior ANZ economist Felicity Emmett said the consumers trapped in Australia had spent up during the pandemic.

“It’s not just big-ticket items that people have bought, it’s all through retail,” she said.

Emmett, however, cautioned the ongoing border closure would cause problems, particularly in the education sector.

“The longer the border remains closed, the more there will be a decline in the number of students simply due to natural attrition and that means the longer to get them back,” she said. “The other issue is that students have got other choices, like the United States or Canada, where it’s easier to get in and out. Over time we’re going to lose market share.”

Last month, Frydenberg noted that in the December quarter alone, the net benefit from border restrictions – between visitors and Australians heading overseas – was $7.5 billion. Over the full year, it could approach $30 billion.

On Tuesday night, the Treasurer will unveil improved forecasts for the budget bottom line and the economy. One of the reasons for that improvement will be how the federal government continues to keep cashed-up Australians locked in their own country.